This happened at this year’s X-Games. Pedal to the metal next time, don’t be afraid, guys 😀 Here is the video where Dave Mirra flips his Mitsubishi.

edit: Video says “Dave Mirra big rally crash” but the driver was Andrew Comrie-Picard while Dave Mirra was in Subaru.

Here is better video where Dave Mirra also crashed Subaru into the wall in the same race. His Subaru was damaged so he had huge problems to steer the car. 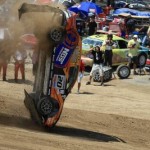