Uniqueness 101 – How to discriminate yourself 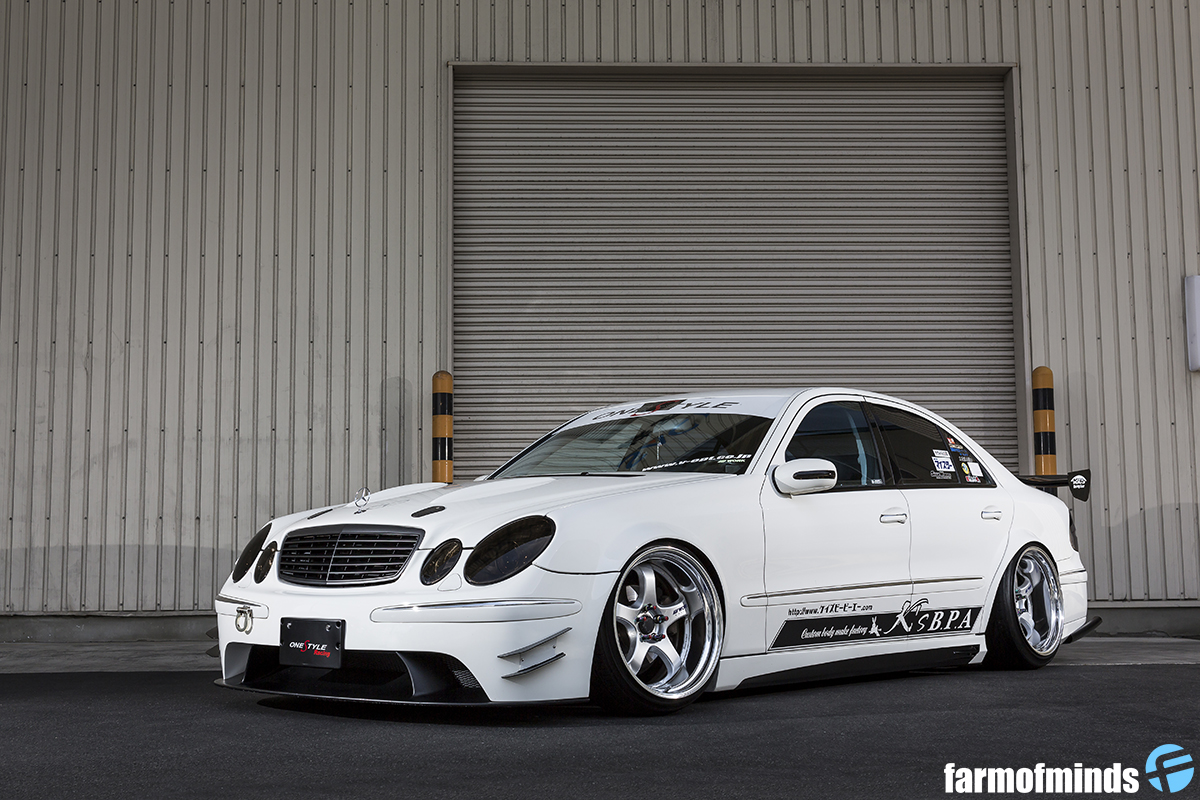 Mercedes Benz. The brand that most people will pair it to people with steady jobs, living a steady life having a family, generally people that wouldn’t dream about what upgrade to fit on their cars next (not to take away anything from petrol heads!). This is until someone comes around and throws all of your ideals out the window.

Our automotive journey usually starts with a simply question of “Which path do I wanna take?”, “Should I pursue performance or should I stand out with a rad racing look?”.

Toshiki Omura was no different from the rest of us. After he made his decision to jump one of Japan’s most versatile and ever expanding bandwagon he’s also decided to take it up a notch and picked a car that is rarely modified to this extent. 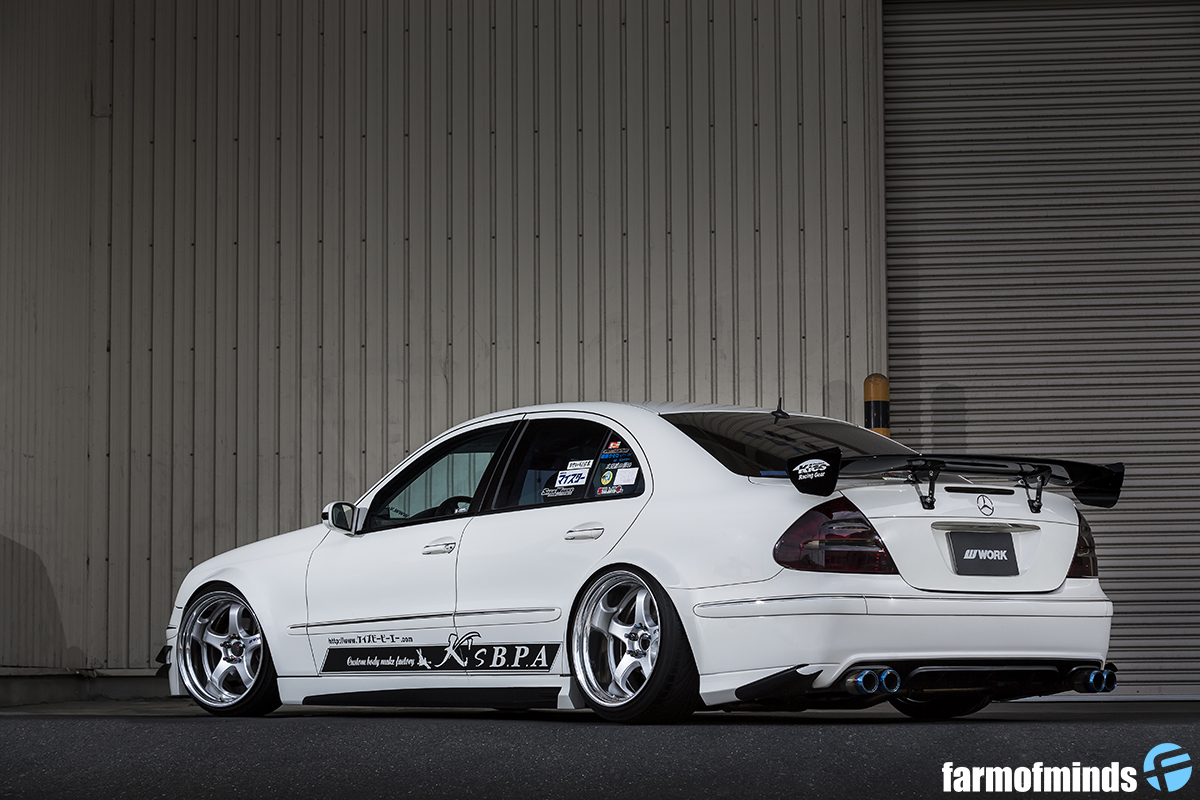 This particular Osaka based E-Class first saw sunlight in 2004 but it was only in December 2012 when Toshiki got his hands on it. All the work was done by K’s BPA Garage whom are specialized in the field of VIP modifications, which explains how this extreme look was achieved in just about a year.

When you decide to take a car that is relatively uncommon in this part of the world, you will have to be ready to face certain difficulties. This is where the expertise and vast experience of the guys down at K’s BPA came into play. This aggressive, mean looking front is achieved by a RIDOX front bumper, which was originally created for a much calmer looking sedan, the Toyota Aristo JZS160. This wasn’t the only cross gender aero part that turned out to fit perfectly from the Aristo. The K-BREAK sideskirts were also adopted and I don’t think anyone could say anything else other than that they fit like a glove. 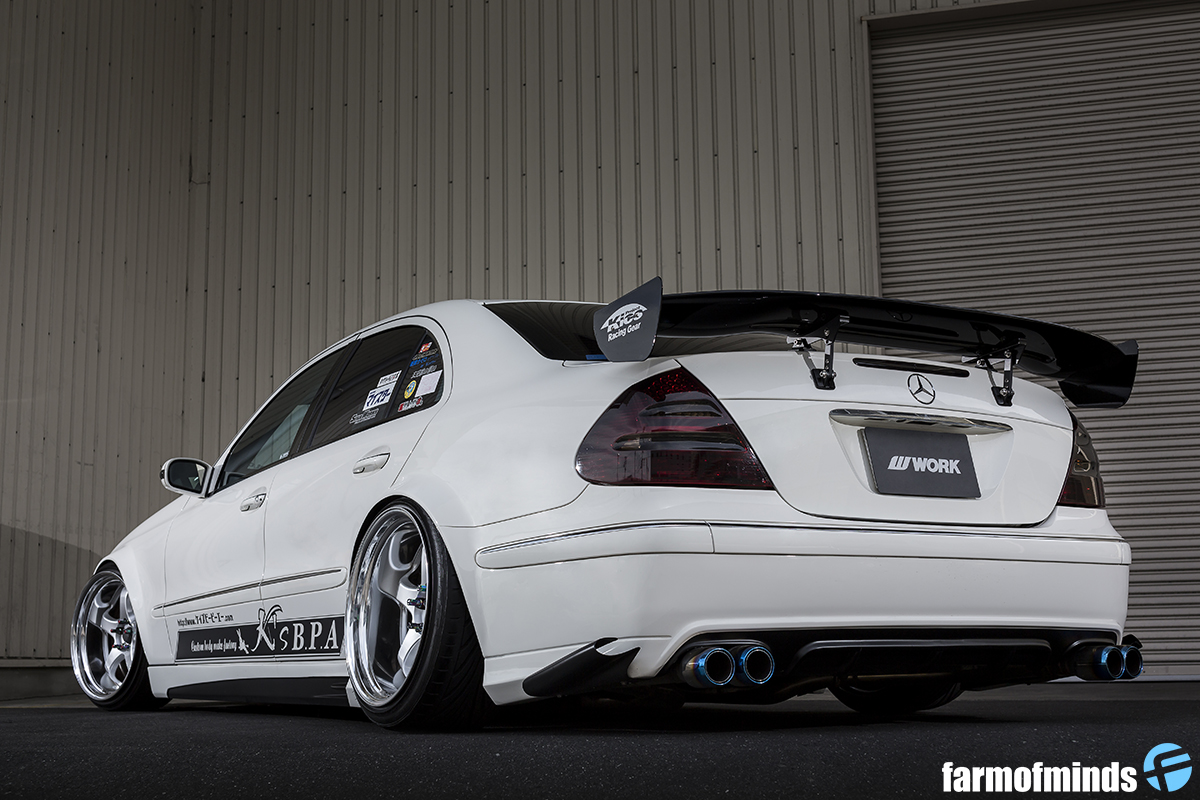 Here’s where things start to get interesting. Wanting to sway away from the standard idealism of the VIP scene, Toshiro decided to add a low profile GT win from URAS and modified the rear bumper with some Vortex generators and pair of burnt dual twin exhausts.

To achieve the oozing aura that GT3 cars have, he also had a custom bonnet made and had the front and rear headlights tinted.

And last but not least to try to contain the obnoxious wheels there were no doubts that the fenders had to be stretched. Precisely 50mm on the front and 70mm on the rear. 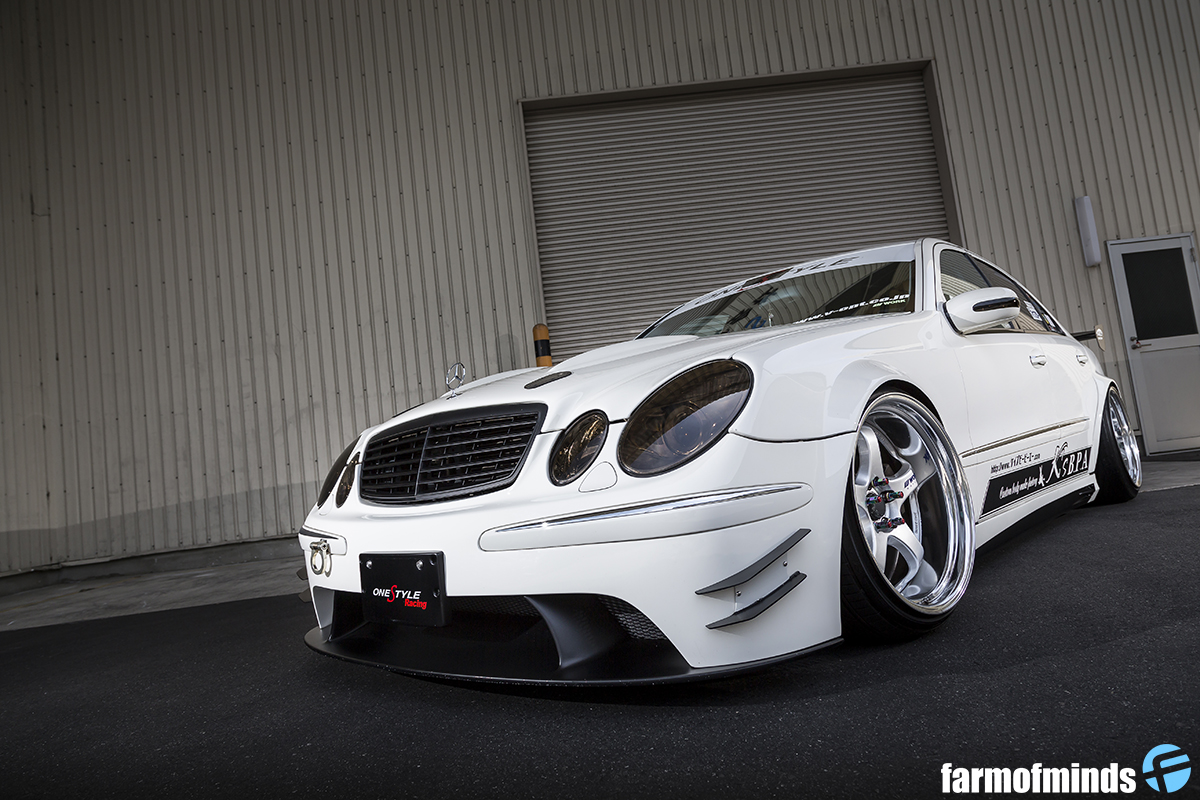 Among car guys in love with wheels it is probably one of the most stated sentence that you “Cannot go wrong with Works!”. The situation is no different here. The staggered fitment of these Work S1R are as follows 19″ x 10JJ with a -20 offset on the front and 19″ x 11JJ with a -35 offset on the rear. Wrapping these and keeping the car in contact with the road are currently a set of Toyo T1R tires with a stage 2 stretch. 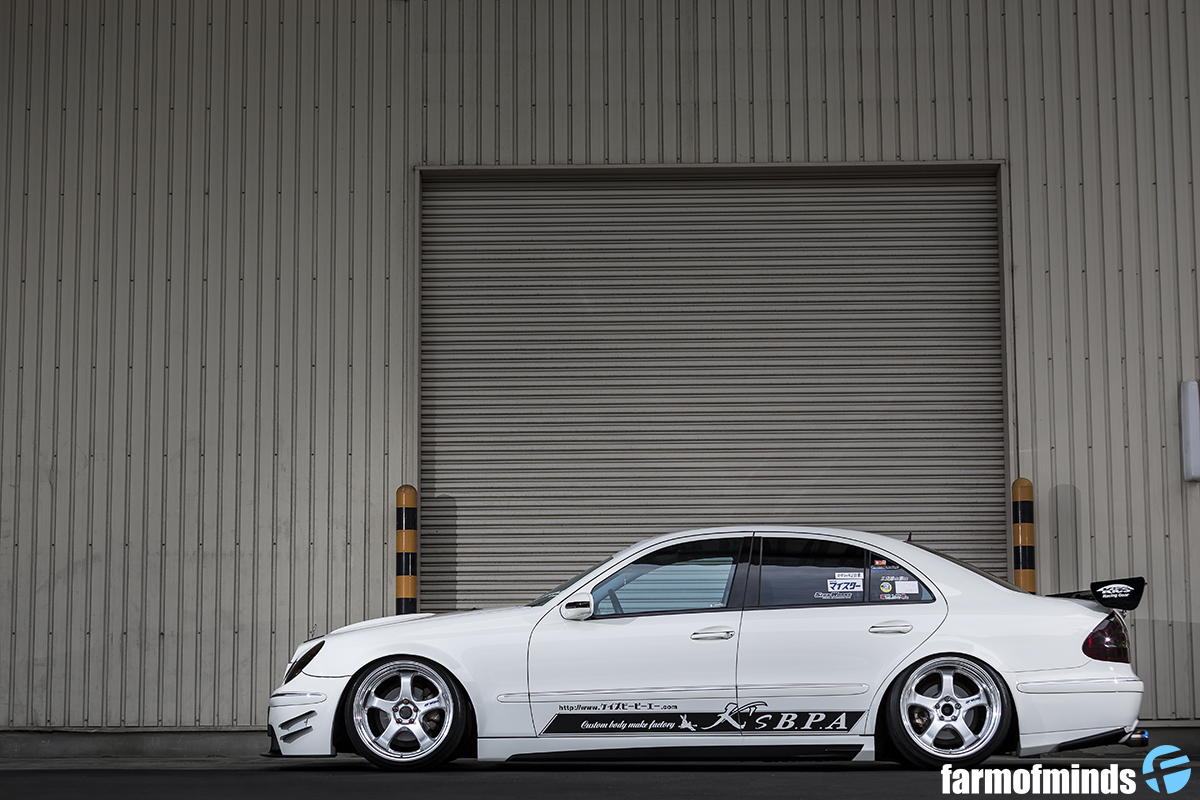 For the moment the interior is as it came off the production, which with it being a luxury sedan isn’t necessarily a bad thing at all.

Similarly under the hood everything is untouched for the moment which leaves us with the 3L v6 E320CDI motor generating a solid 220bhp with a 400lb/ft torque. 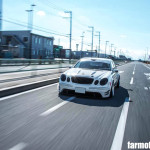 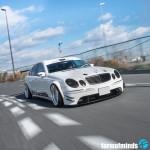 Toshiki has given us a glimpse of his future plans which involves a set of new wheels, new mufflers, suspension upgrades and a new color. Also a little something called 2JZ (yep you read that right) swap, which I am absolutely stoked and looking forward for!

Doubt it that anyone would argue that he’s already accomplished that many of us are struggling with and he’s discriminated himself from the crowd.. and probably made quite a few necks snap! 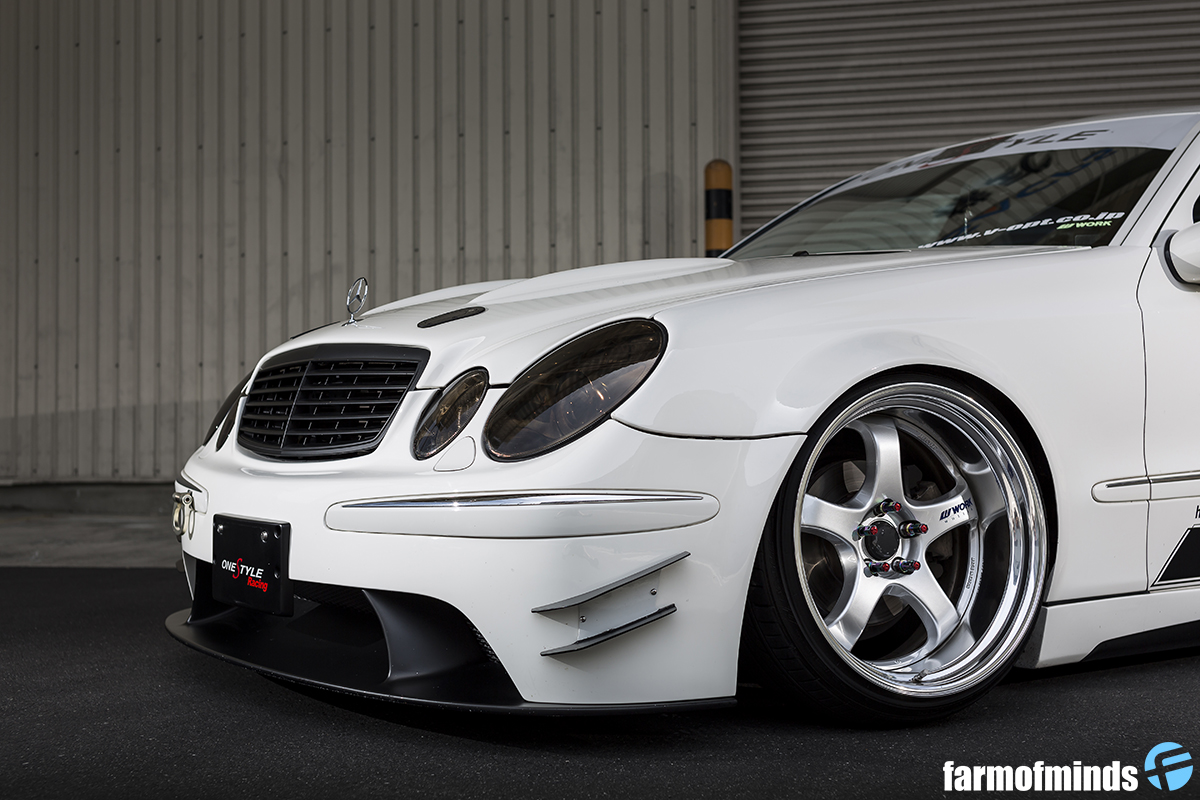 I would also like to take the opportunity to thank for the amazing shots from WORK Wheels very own photographer Jean-Christophe and go ahead check out their newest line up by clicking the link below.

As per usual enjoy a few more pictures of this beauty posing for you viewing pleasures and feel free to comment below. 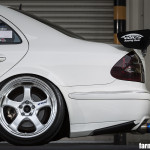 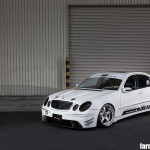 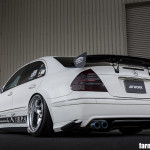 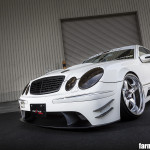 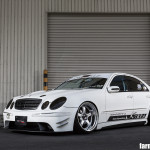 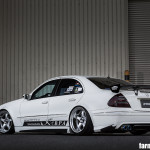 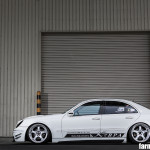 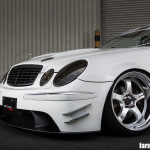