Another one was even more exotic: Gemballa Mirage GT worth more than €700.000. This one was crashed by Prince Marcus Eberhard Edward of Anhalt at Paul Ricard circuit. 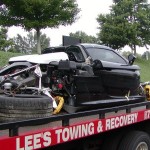