The Super- and Hypercar Exhibition, Part 2

Welcome to Part 2 of my Hockenheimring feature. If you’ve missed Part 1, check out the following link:

I really wonder how a sports car by John Deere would look like? I mean, just look what Porsche and Lamborghini are capable of! Lamborghini Aventador LP700-4:

I almost didn’t realize what was standing in front of me until I saw the sticker on the front lip. This is the Lamborghini Gallardo LP570-4 Super Trofeo Stradale, a reminiscence to the race cars of the Super Trofeo series.

Out on the parking lot, a first generation Lamborghini Murciélago Roadster.

The only Lotus at the exhibition (there was one other out on the parking lot though). The Lotus Evora S.

And in case you didn’t notice, there’s also a white one in the last picture, right next to one of the Dunlop girls! Not a big fan of this one, the Hamann Hawk, obviously a tricked out Mercedes Benz SLS AMG. Too much for my taste.

This 1985 VW Passat Wagon 32b Syncro (AWD) you can see driving through Pit Lane in the background is one of the Time Attack cars by LE Composites with the 5-cylinder Turbo engine of an Audi S2. Sick car.

American and German muscle in one picture. The Camaro ZL-1 was already featured in Part 1, so meet the Mercedes Benz C63 AMG Coupé Black Series.

Some more V8 goodness, the SLS AMG (with a Porsche 997 Turbo convertible) and the gullwing doors lacking SLS AMG Roadster.

I know some of you came here just for Japanese cars. Don’t worry, I got you covered. This is the fastest sedan of the Tuner Grand Prix 2012, another LE Composites Time Attack car, the Mitsubishi Lancer Evolution VII RS a.k.a. “Downforce”.

More information about it can be found here (in German though): www.mitsu-talk.de/index.php?page=Thread&threadID=33832

Nissan Skyline R34 GT-R. And it says “V-Spec N1” on the front bumper! This was probably the best condition R34 GT-R I’ve ever seen.

More Japanese cars about to come in Part 3! Only a few of them were static the whole time. 😉 Going on with this Opel Omega Touring Car by Irmscher.

Now it’s up for Porsche (the “e” is not silent)! They all look the same, still there are some exceptions! 9ff is one of the best Porsche tuning companies on the planet, and this is the result when they decide to go mad. The 9ff GT9 CS.

Another well known Porsche Tuner is TechArt. They keep it rather simple.

When not being handicapped by stupid regulations, the Porsche GT3 RSR literally destroys the competition in the field. Piloted by Team Manthey Racing drivers, there’s usually no way to stop them from winning a race. If you ever watched the 24 hours of the Nürburgring, you might know this green-yellow beauty:

Kremer Racing and Pirelli were also in the house.

It’s time for a history lesson! Here we have a Porsche 936 Spyder.

And a Porsche 962 LM (made by Dauer Sportwagen GmbH).

The last one of the Porsche isn’t actually a Porsche. Well, it was one……in fact, it was a Cayman. Now just look what manufacturer RUF has done to it! I bet you like this RUF CTR3 very very much.

Before we get to the last manufacturer in the range, have a look at this British madness, the Radical SR3 SL, standing right next to a bonkers Caterham.

Wiesmann, the probably most misspelled car manufacturer in the world. 😀 Check out the Wiesmann GT MF5, powered by the V8 Twin Turbo of the actual BMW F10 M5. The V10 version got dumped because of stricter exhaust emission regulations.

And as the final car in this article, the MF3 Roadster “Final Edition” with a pretty daring mix of colors:

That was Part 2, stay put for Part 3 which will feature some Time Attack and Drift Action! Thanks for reading, and as usual, don’t forget to like and share us on Facebook! 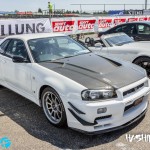