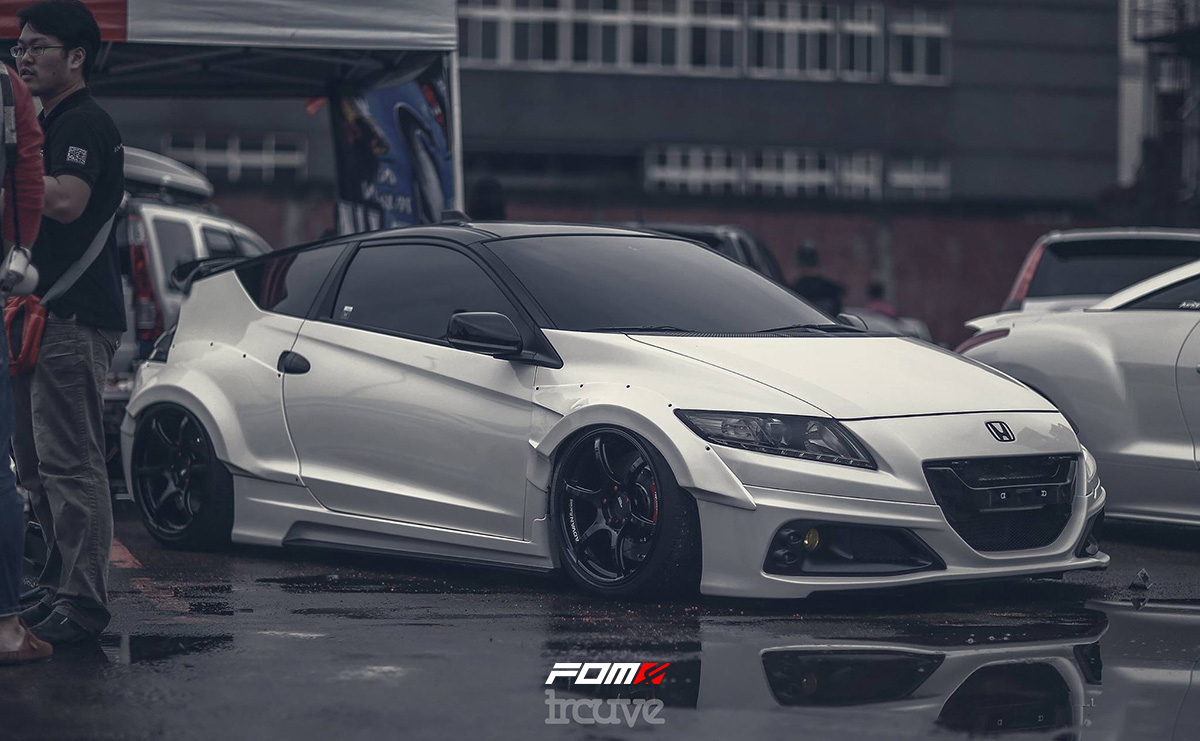 At times like this, I feel like a badass reporter that’s just got the inside scoop of this week’s top news. Just like in the sports world, where from time to time you have some outstanding performers pop up out of nowhere, in our scene we have some mad rides surface and blow everyone’s mind right out.

When this happen the entire petrolhead globe (ye that’s right, we have our separate one!) goes crazy; people are brought together in conversations and arguements, some admire and some loathe it. In essence this is really the beauty of it all.

Some people might even like it so much that totally check the prices for used CR-Z’s around Europe (fine this last one was me :D). 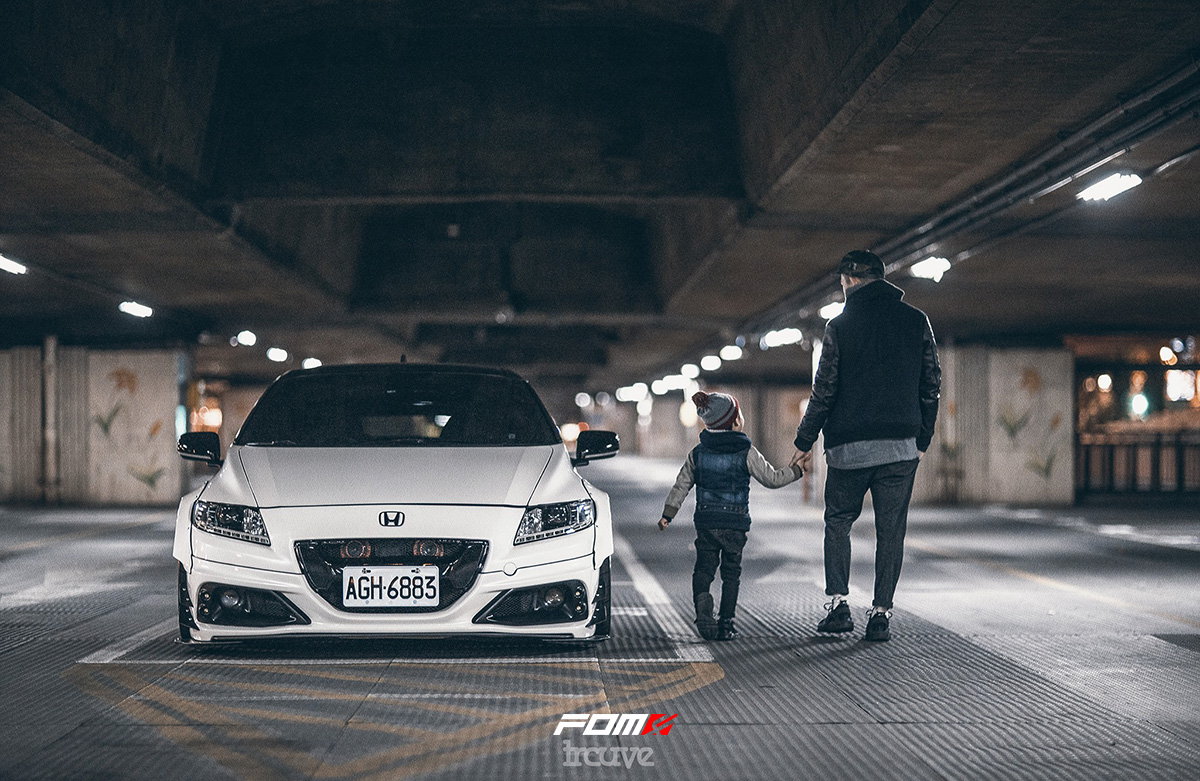 The CR-Z is one of those “Sport Hybrid Coupe” that slipped under the tuning culture radar with only a few examples to show that it can be used for more than just an economic family hauler (not that there is anything wrong with those).

If you’ve done like I did then you quickly came to realize the amount of work that’s gone into this is easily on Liberty Walk or RocketBunny level. I talked about this a lot before and here we go again, it takes a man (or woman) with a vision, passion and a huge set of cojones (ladies can have imaginary ones) to do such an insane transformation.

But oh boy, are we glad when someone puts in all that hard work. 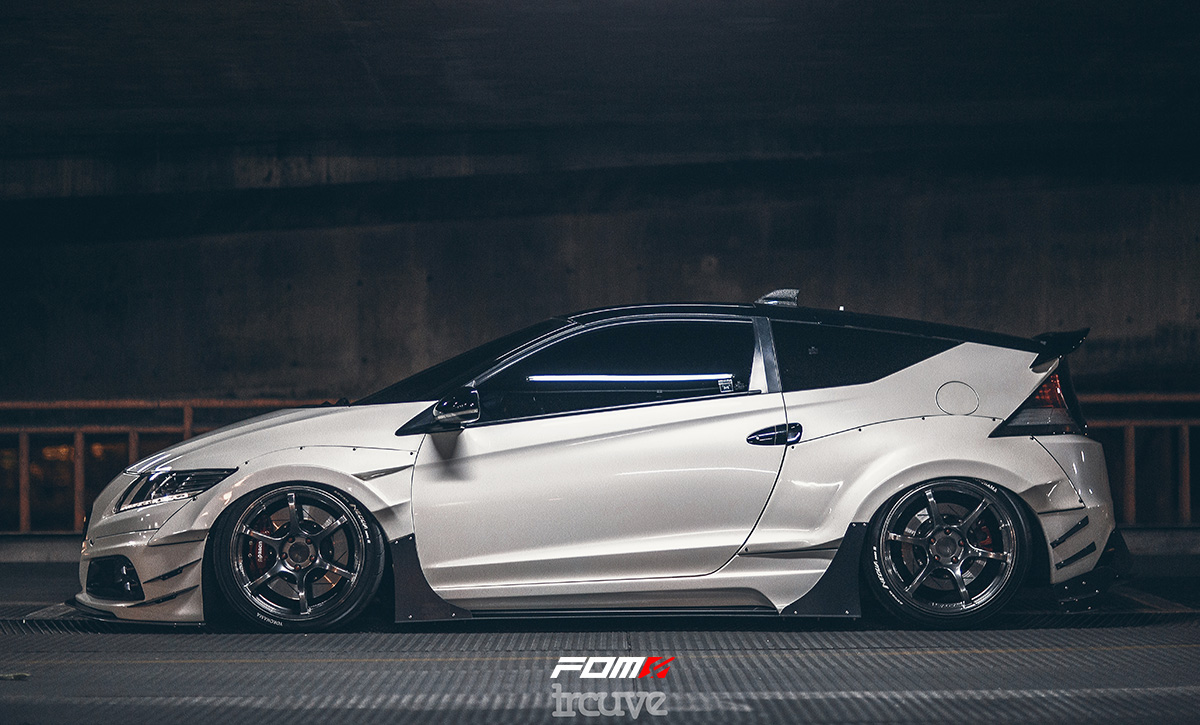 Huang who’s living in Taipei, Taiwan bought the car mid 2014 with a simple reason; “This is my dream car.”

The most notable change is of course taking the sporty look and turning it into this beastly show car.

The wide body kit was supplied by Rexxstyling with a Mugen front bumper and side skirt thrown into the mix. The low profile spoiler is from SilkBlaze (who are most commonly known for their 270hp HKS CR-Z). 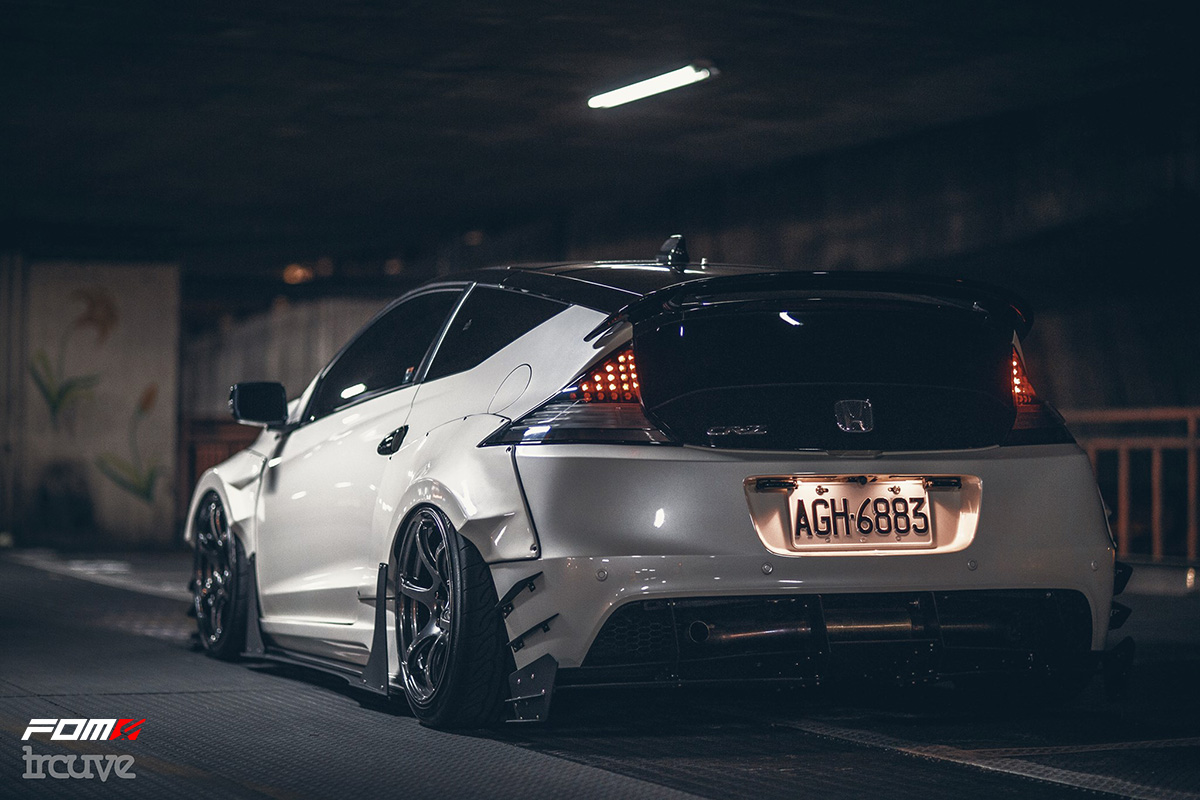 Alongside to the evergreen riveted fender flares and the canards there is also a one of exhaust elevating the sound effects to a whole ‘nother level.

Cosmetic changes weren’t the only ones done to the chassis, as you’ll soon find out that this particular gem doesn’t just look pretty it can also deliver you a tremendous amount of fun. 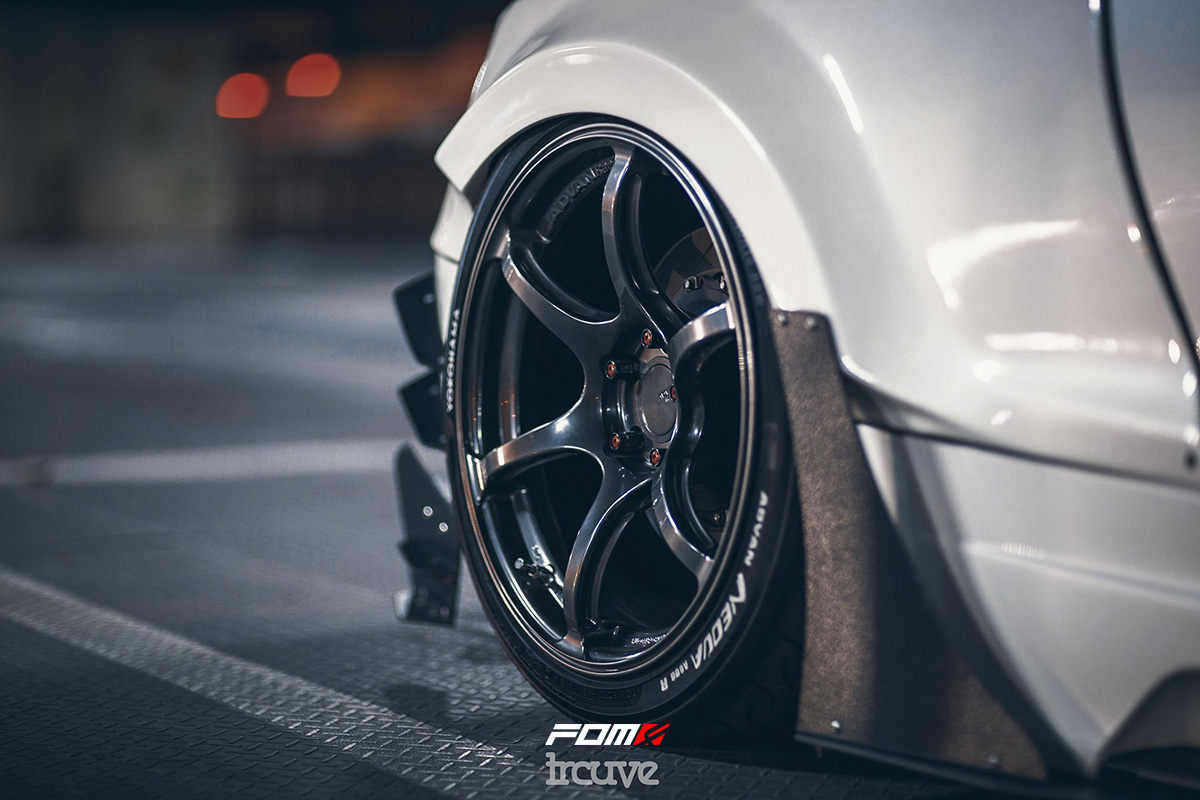 First and foremost the car sitting pretty on a staggered set of “normal” sized Advan RG3 with (F)8.5J/31 and (R)9J/25. These are held on by a stylish set of Kyo-Ei R40 iCONIX nuts hiding a prestigious set of AP Racing CP9040 6 pot calipers. Not so surprisingly, Huang opted to get some air suspension installed in oppose to living the static life (most likely avoiding a lot of lumbar pain down the road), that was achieved by a kit from AirREX.

There are several other mods that are not visible for the eye, however just as useful. We have front and rear tower bar as well as reinforcement parts for both doors and rear trunk from Kansai, a rear 19mm anti roll bar from Ultra Racing and a Spoon front stabilizer, rigid collar.

Why was all this necessary? I’m glad that you asked! 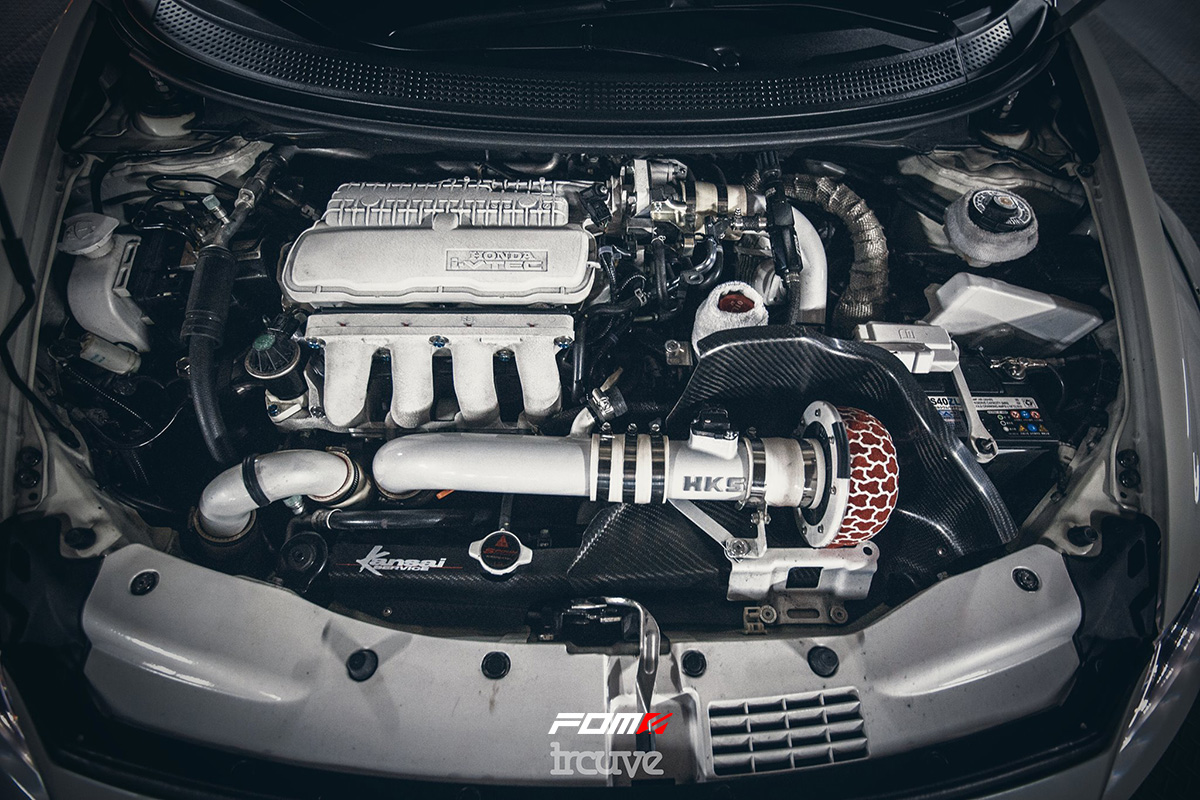 Well that’s so all the win under the hood is put to use in a safe manner!

The Spoon intake chamber was sand blasted to white so it matches with the overall theme of the car.

The current power output is estimated to be around 176HP which is a moderate increase from the factory 120 bhp or so. This was a result of an HKS GT4015 supercharger kit with an HKS SSQV4. This setup is supported with a big throttle body by Ventuli, a high power Ignition Projects coil pack upgrade, Kansai radiator and carbon cooling panels around the bay. 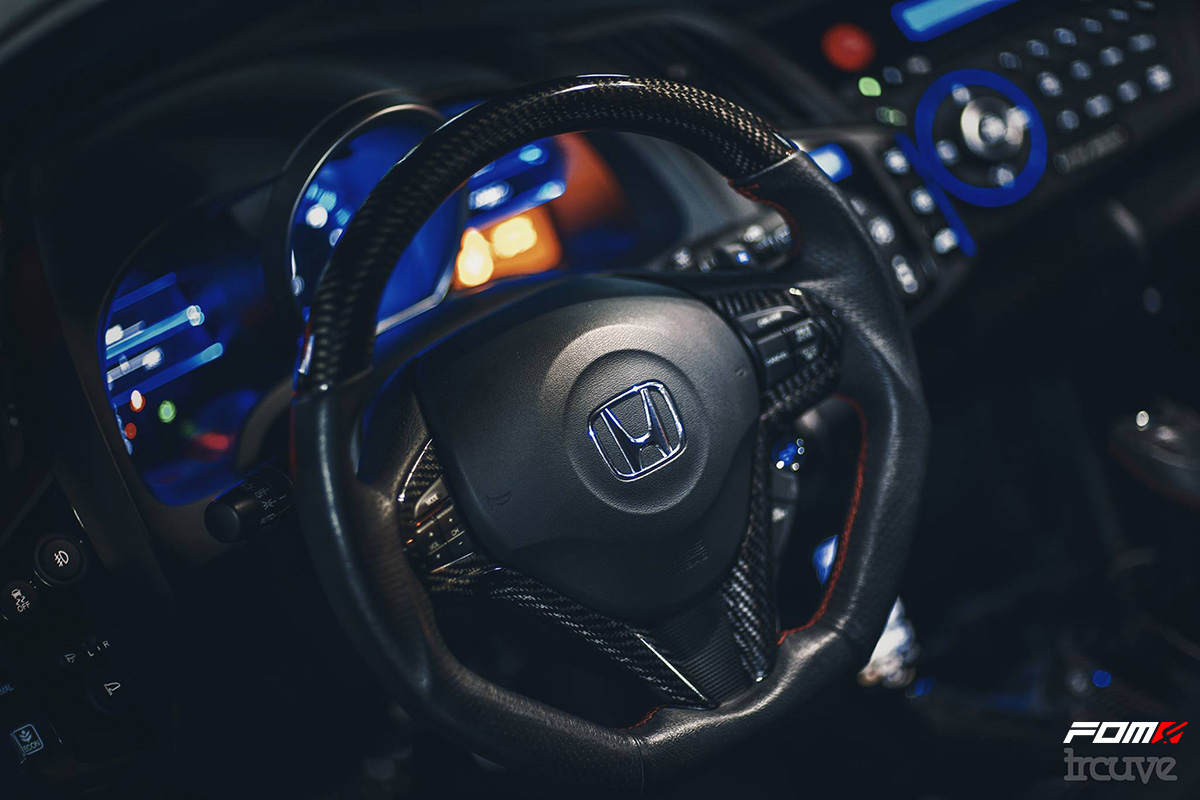 One of the best feat of these modern cars is that they are pretty comfortable in a stock state. Having said that just as with everything in life.. adding a little carbon fiber to it can never hurt!

The inside was refreshed with the help from Vision, Thrash both providing some carbon interior panels, whilst J’s Racing covered the mirror in it.

The steering wheel was replaced to something equally functional but a wee bit sportier Lecce one, whilst the seats were replaced with nothing but the best, Bride Stradia II. As an added gadget Huang decided to get some multi-purpose device in the form of an HKS OB-Link. 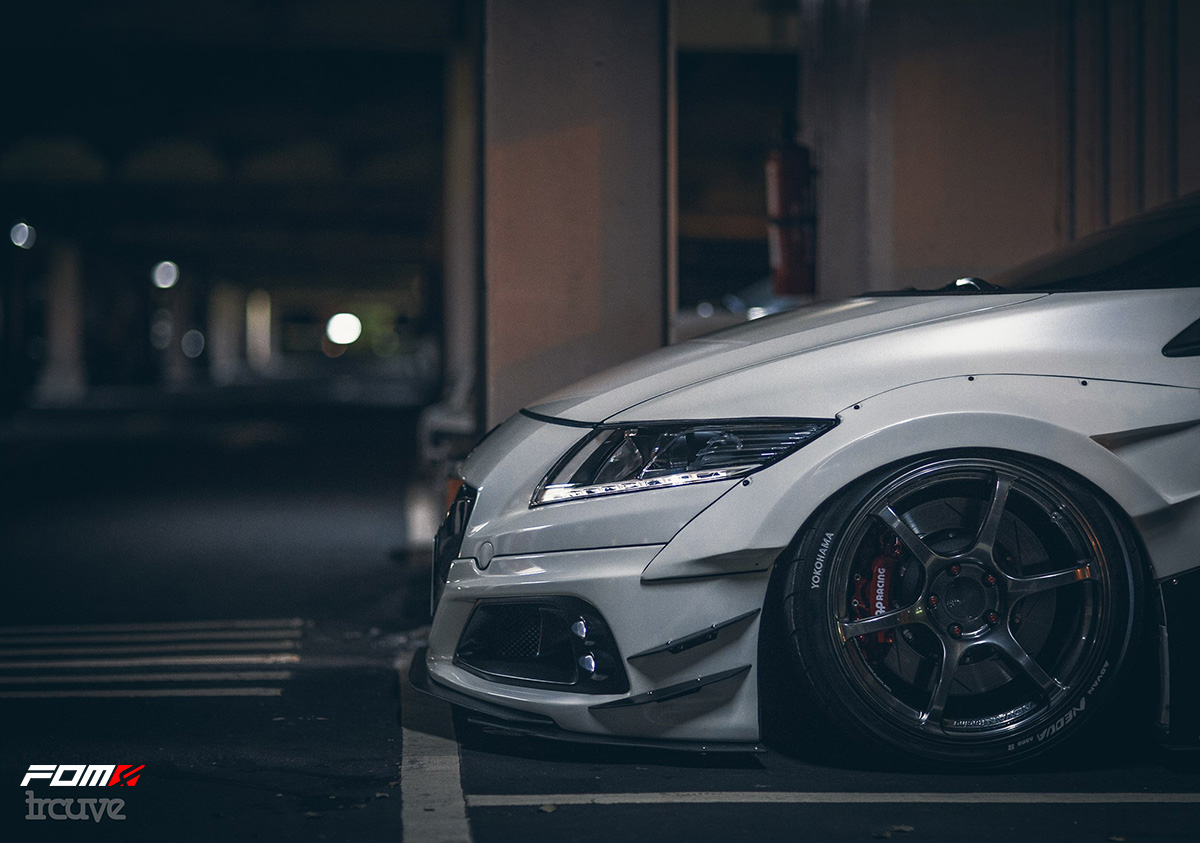 As you might be aware of this, we traditionally send out a questionnaire to the owners in order to get the details. One of the questions, probably the most exciting one is “Future Plans”. Obviously we love to see our featured owners having an insane amount of love and passion for their creations and write us an entire paragraph, showing us that they are prepared and we better get ready for the upcoming changes.

Huang took a much more humble and mysterious approach (that made me giggle in a good way) and simply said; “To complete the car”.

I mean Facebook, Instagram and pretty much every well known blogger/social media was taken by a storm, as this unorthodox little car snatched the champion belt.

Before I forget we also have the progress pictures for the build (slightly lower quality), which didn’t make it into the feature so leave us a comment if you’d like us to throw them up.

I’d like to also want to thank Trcuve for the dope pictures! Click on the link to check/support his work and keep scrolling below for some more awesome CR-Z action.

Until next time! -verti 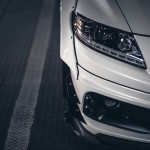 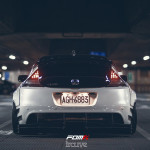 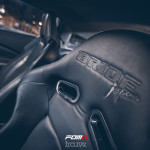 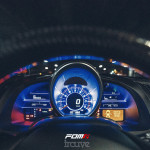 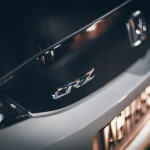 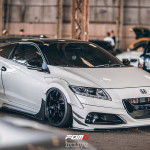 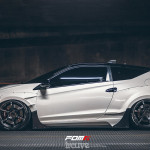 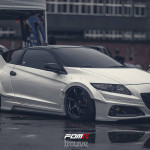 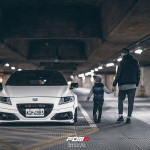 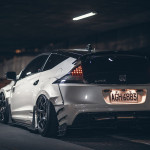 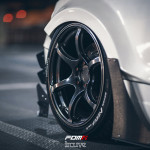 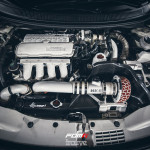 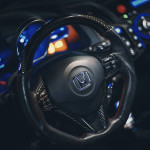 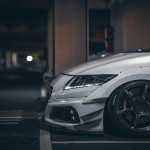