Now it would be appropriate for the fourth Japanese sport car render, the RX-7. But the thing is that Mazda didn’t showed us some palpable concept except Mazda Furai Concept car. We will have to wait. 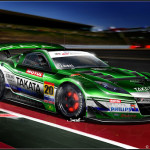