This is one hell of a car. Chris Sjoberg from Sweden sent me the pics of his R32 Nissan Skyline GTS-4 and story about the car. Simply amazing. 650hp/9000rpm with stock internals, wow.

I got the car to use it as a transport car for me and my girlfriend, I have another skyline but that is a pure racing car. (last picture) After some beers with friends we came up with the idea to check out how much hp we could get out of the little RB20 with std internals, so next day I started posting on all kinds of skyline forums around the world to find how much hp people got out of the RB20det at most. Most people said that it would break at 3-400 hp but there where a few guys that had done some serious test and got out around 450-500 hp on dynos. One of the cars had to run on the dyno more than 50 times to prove that it really made
these numbers.

So at that time I started swapping parts on the car pressing it harder and harder, at this moment I’m close to 650hp with standard internals, except for the cams and the steel head gasket. When I mention this to people they think I’m lying.

But there’s more. I have revved it to 9000rpm at several races, I have now set the rev limit at 8500rpm to save it. The boost pressure is 35psi…yes 35psi no bs (2.4bar of boost) its extremely laggy …. dead under 4500 rpm but explodes in 4 wheel spin after that. The reason the engine still works is most because I run it on Ethanol which you can buy on regular pump stations here in Sweden. I have no dump valve on it, since they explode all the time for me. Have tried 4
different but they all fail after awhile. I have had lots of problems with missfire of several different reasons and it have started missfiring again. I have boosted the voltage for the coils up to 18 volts which made improvements but I reached a new limit and have to get splitfire coils now.

I have now reached close to the limit of the cylhead maximum flow, so I have made a custom cyl head with larger valves and ported chanels and custom valve guides to get further up in hp.

I will soon swap std rods and pistons for race parts and continue the quest for a high hp RB20DET engine. My goal is to get out 750-800 hp and be able to rev it to 12000rpm just because its fun. I am well aware of that I could make these hp levels much cheaper with a RB25 or RB26 but that’s not the point. I already have a high hp RB26 motor in my Dragracing Skyline(last picture).

I’m not a newbie. I know what I’m doing, I have been working for GM/SAAB at the combustion engine laboratory in Sweden for 15 years. I am well aware of that the little engine is producing numbers that is way over the limit for it, but its fun. 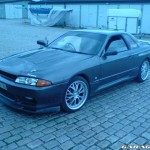