So…whats crazy, mean and loves to smoke? … This. Calabero’s awesome RPS13. When you hear the words drift and street combined in one sentence you know something special is about to happen, and was I wrong this time? No. Calabero’s monstrous 200sx looks like the Schwarzenegger of drift car’s, as mean as your high school principal and as dark as the night comes this is not a sight you want to see flying toward you in your rear view mirror. 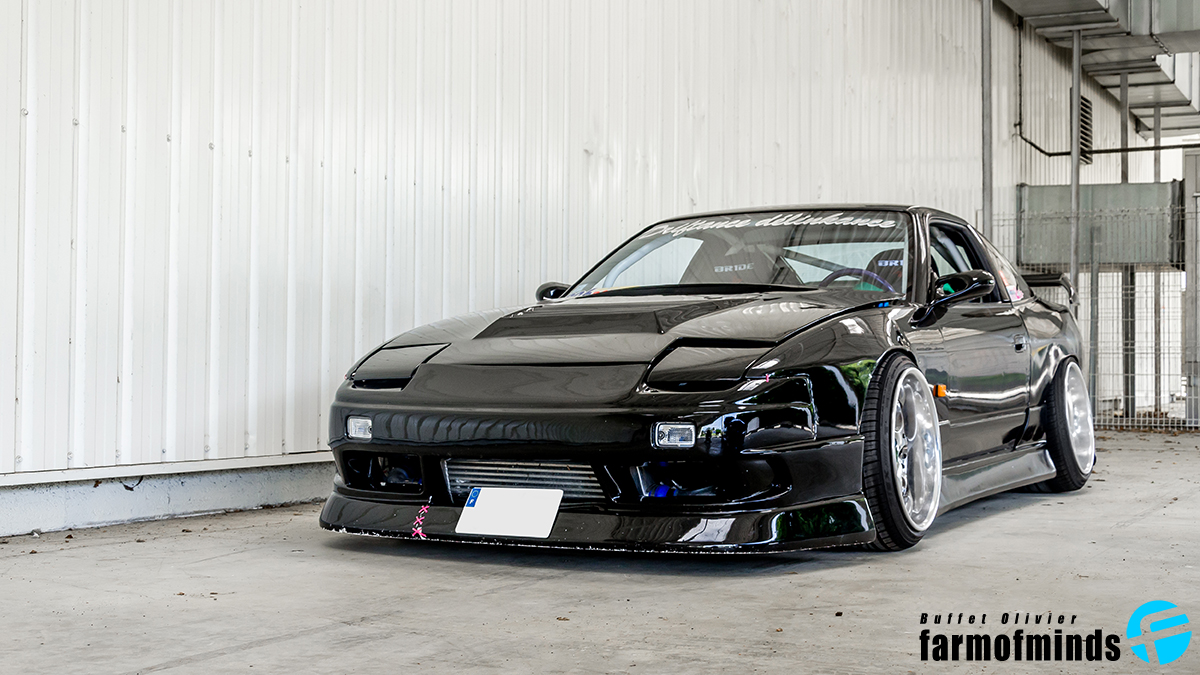 I take my hat off to Calabero’s and the guys at D-Link they really have gone all out on this build.This is a fully spec’d drift car. Low, wide, stanced, an iconic drift car with modern bells and whistles. As far as the history of drifting goes I by no means have to try and corroborate the S13 or its presence in the JDM scene. It’s practically fathered the Jap drifting scene along with a few others. 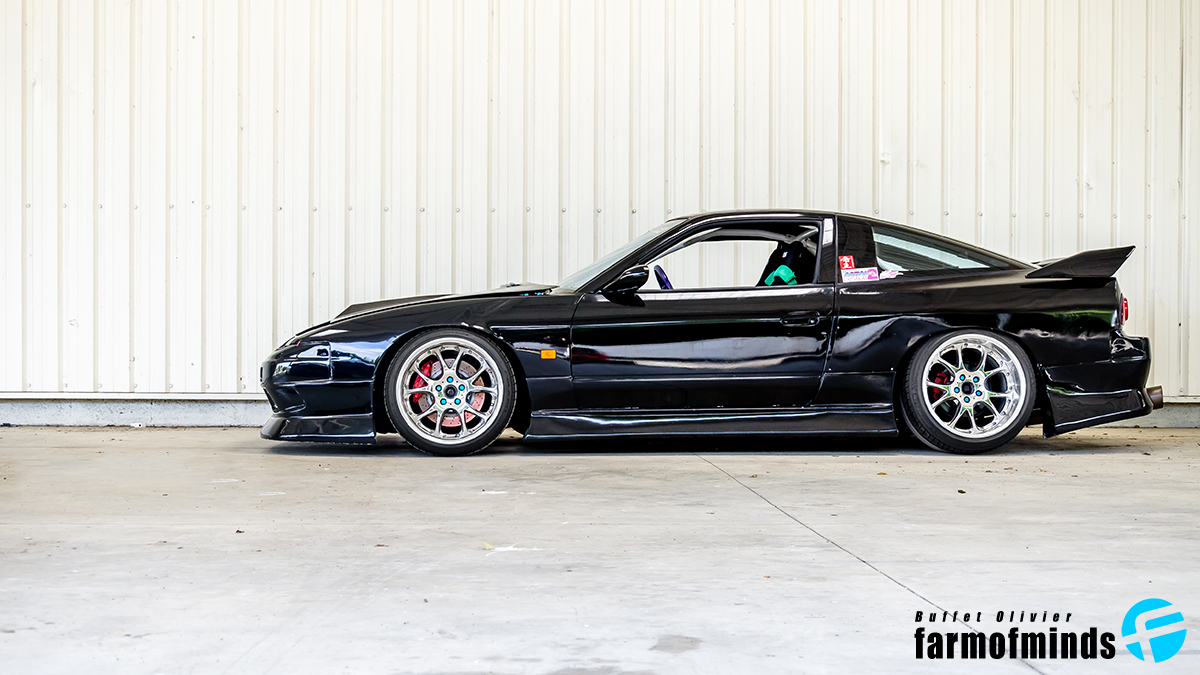 Always praised on its well-balanced chassis and its uncannily ability to slide, it was never popular babe magnet if you know what I mean. What was on a drift track a legend was never highly regarded where beauty and looks were concerned. You’ll notice I’m speaking in past tense, reason being; this definitely doesn’t lack beauty. Despite being settled in France with Calabero and team D-Link this thing Oozes its origins, as phenomenal as it would look sat in front of the Eiffel tower, it would look even more at home sat in centre Tokyo. Almost perfectly balanced it administers looking pretty, mean & street without nonsensically favouring any, Calabero has really grasped the JDM look. 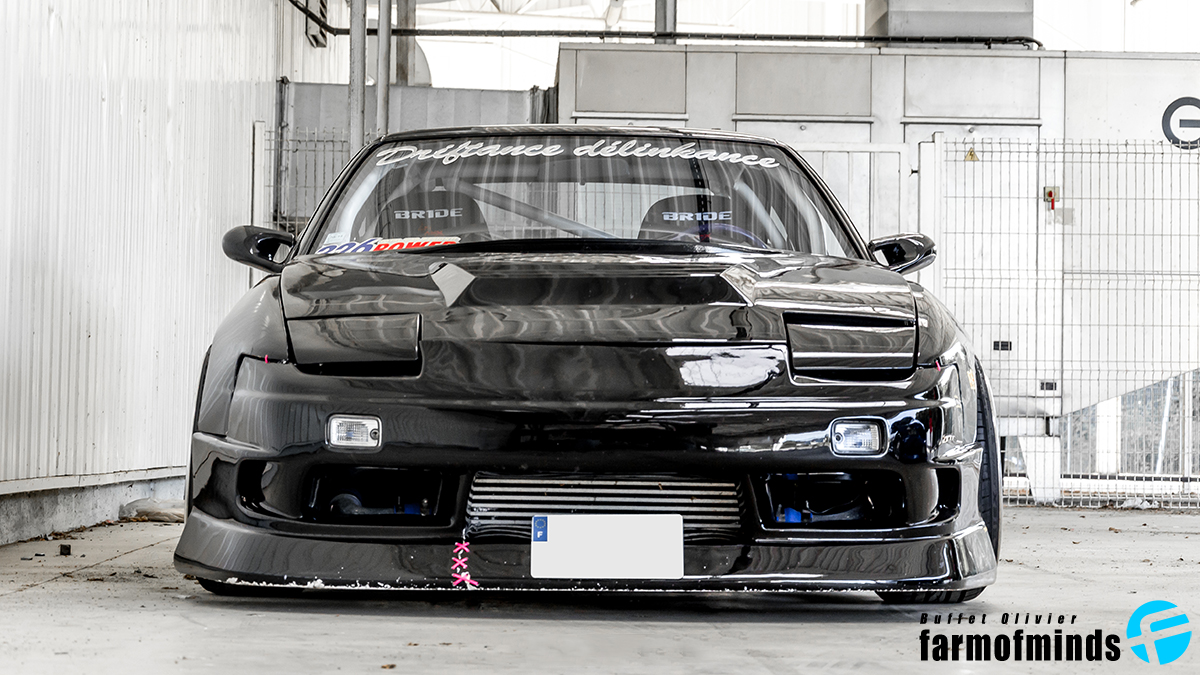 The part we all love, the most anticipated part of any modified car article, under the hood.
Often enough Jap drift cars are far from stock if they are involved competitively within the sport and this by all means is no exception! This infamous SR20DET block kicks off with monumental, maybe even obligatory 550cc fuel injectors accompanied by the best money can buy 256 camshafts from HKS providing a considerably wider power band opposing to the stock cams. 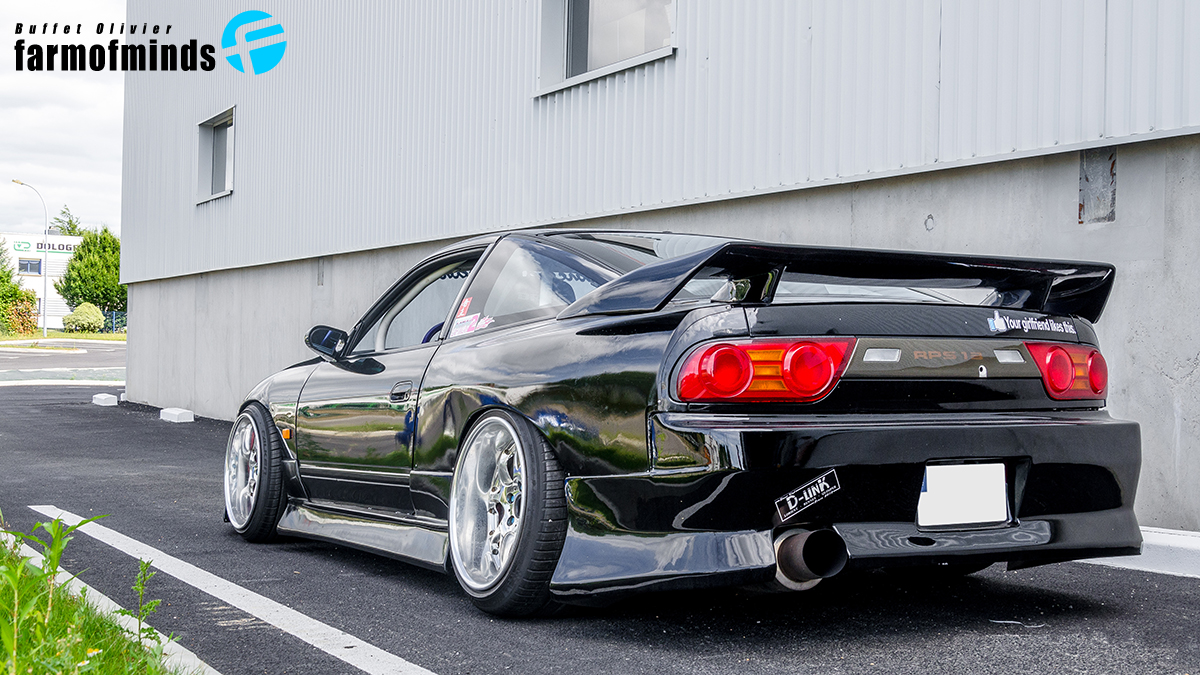 The rest of the engine bay only gets better, a compelling & colossal Garrett GT2871r turbo charger run through to a 3” exhaust system which pops and bangs sounding like an old western shoot out! To tame the flurrying beast’s that live within this 340bhp engine is a hissing dump valve from Forge themselves, another addition to this RPS13 orchestration. The RPS13 also benefits from a Jap Speed front mount intercooler to make sure it stays cool as well as look cool. The cars brain descends from a line of famous ingeniousness, controlled by an Apexi Power FC D-jetro ecu, there is no wonder why this thing is pushing near 350 stallions and comfortably. This is no amateur when it comes to drive-ability either with boost controlled as you wish by the superb HKS boost controller alongside the vastly used Walbro 255 fuel pump, a well-chosen combination. This spec could eradicate pretty much any well put together drift car that stands in it’s way. 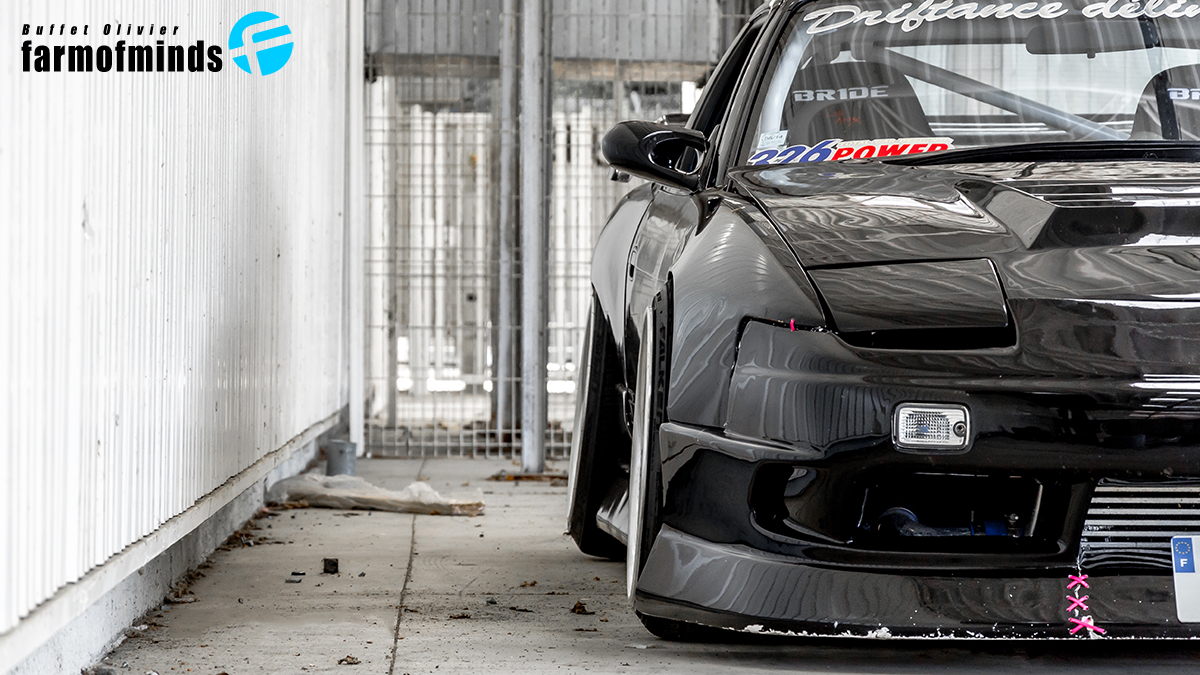 Paying homage to it’s Jap ancestry it’s equipped with a complete bodykit from Bn sport consisting of a mean, beefy rear bumper giving it just the look it needs, a popular choice among many S13’s and we can see why. In perfect harmony with this the front bumper sits low with the illusion of a separate splitter similar to the rear. With perfectly inline side skirts to look at this is one stylish and extravagant body kit, sure to turn heads, the flamboyant wide rear fenders set up of +50mm wont go un noticed, especially when in motion. A vented bonnet from D-max slightly elevated, another component this S13 wears well, can it get any better? Of course… With a 326 rear spoiler for that ounce of stability, Kouki rear lights and pink xenons they bring an adequate amount of humor & fun to this S13. 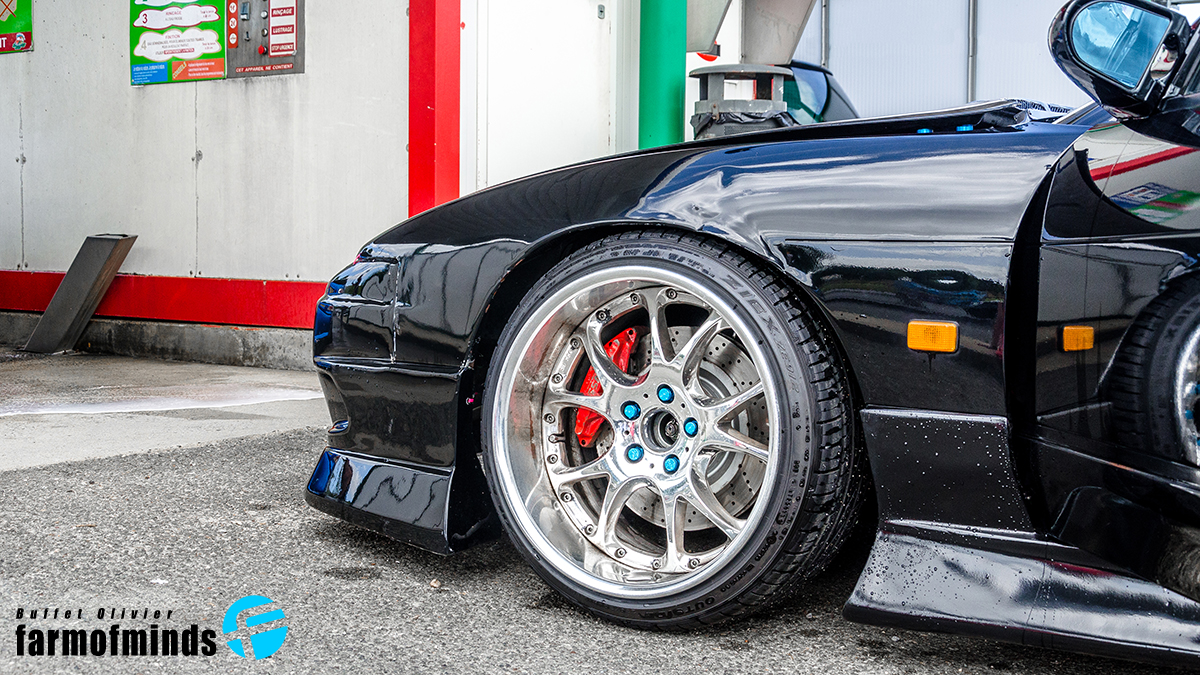 Thanks to a camber kit from Zenky the s13 has a low gorilla like ‘do not mess with me’ stance. This is assisted by being lowered on Coilovers from Megan racing to the perfect height for such a burly, hulk like look. This thing is certainly not prepared to be be pitied upon or bullied by its newer more recent younger brothers. To give the car such poise is a full kit from Cusco including a front and rear strut brace to keep the wheels where they should be as well as a roll cage just incase things do tend to get ugly. The s13 sits on stunning SSR Agle Strusse wheels with an ample -7 rear and -3 front offset which gives a beastly look but beautiful ambience! For brute force stopping power, behind the SSR’s sit 350z pads with S14 callipers – now that’s brotherly love. 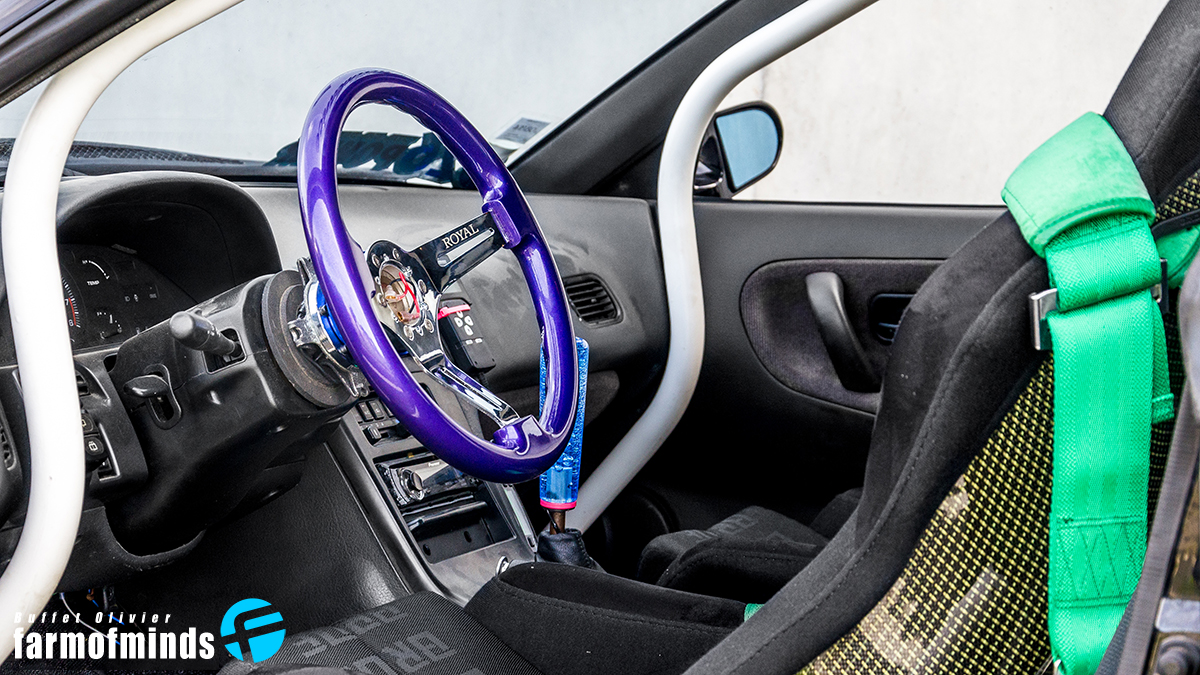 Now the interior is pretty much on par with the rest of this car, spec’d well and nothing but the best quality especially aesthetically speaking. The cockpit of Calabero’s master piece has a black bride seat to make sure your kept in one spot when hitting some ridiculous slides with the welded diff! A blue grip royal steering wheel, a beautiful asset, If i may so myself it fits perfectly in the wardrobe of this S13. A quick release from Sparco and Takana 3” harness, safety first . To upgraded the electronics in this legend, the guys at D-link have installed Apexi boost gauges to make sure everything is under control and a whole digital dash from the 240sx. Last but not least the renowned ‘dildo’ gear shifter, a longer stick for minimised shifting time. Like I said, fully spec’d. This thing doesn’t do half hearted.

Calabero and the guys at D-link say there are even bigger things to come, rumoured plans for a 400bhp version of the S13 – we cant wait!

See all of the cars from the guys at D-link here – http://delinkance.blogspot.fr/ 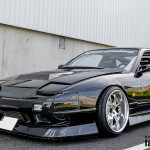 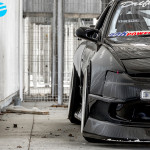 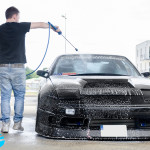 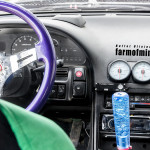 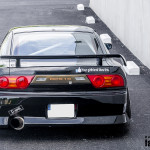 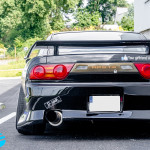 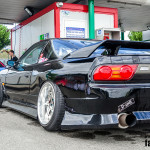 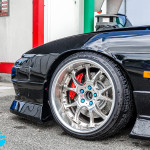 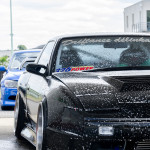 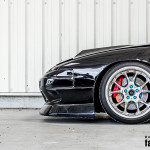 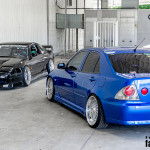 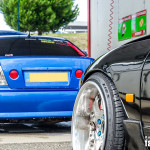 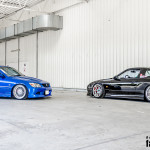 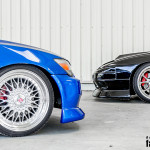 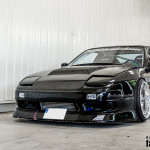 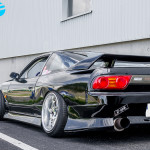 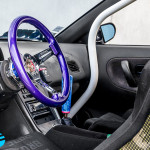