Obviously Toyota is aware that the new Nissan GT-R is a big success. They are really serious with their upcoming supercar Lexus LF-A. Along with “stock” LF-A there will be more powerful version of LF-A, just like Nissan’s more powerful GT-R V-Spec. Spy photographers from Worldcarfans.com are responsible for this new spy shots of race-prepared Lexus LF-A. As you can clearly see this is not an original Lexus LF-A but some kind of race prepared supercar. There is a big fixed rear wing, redesigned front bumper with bigger airdam, different front and tail lights (with carbon fiber!), front bumper carbon fiber canards, fog lights are lower, small Le-Mans mirrors, hood pins, quick access fuel cap with carbon fiber mounting panel. There is also roll cage inside.

Rumours are that the new Lexus LF-A will debut on legendary 24-hours Le-Mans race at Nürburgring in May.

Now we are waiting for Honda and their “NSX“. 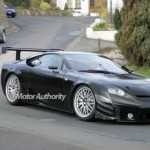