Can a more capable, reprogrammed ECU make much of a difference to an otherwise standard car? We see if EcuTek‘s ProECU and RaceROM software upgrades can transform the current Mazda MX-5. Words by Joe Clifford. 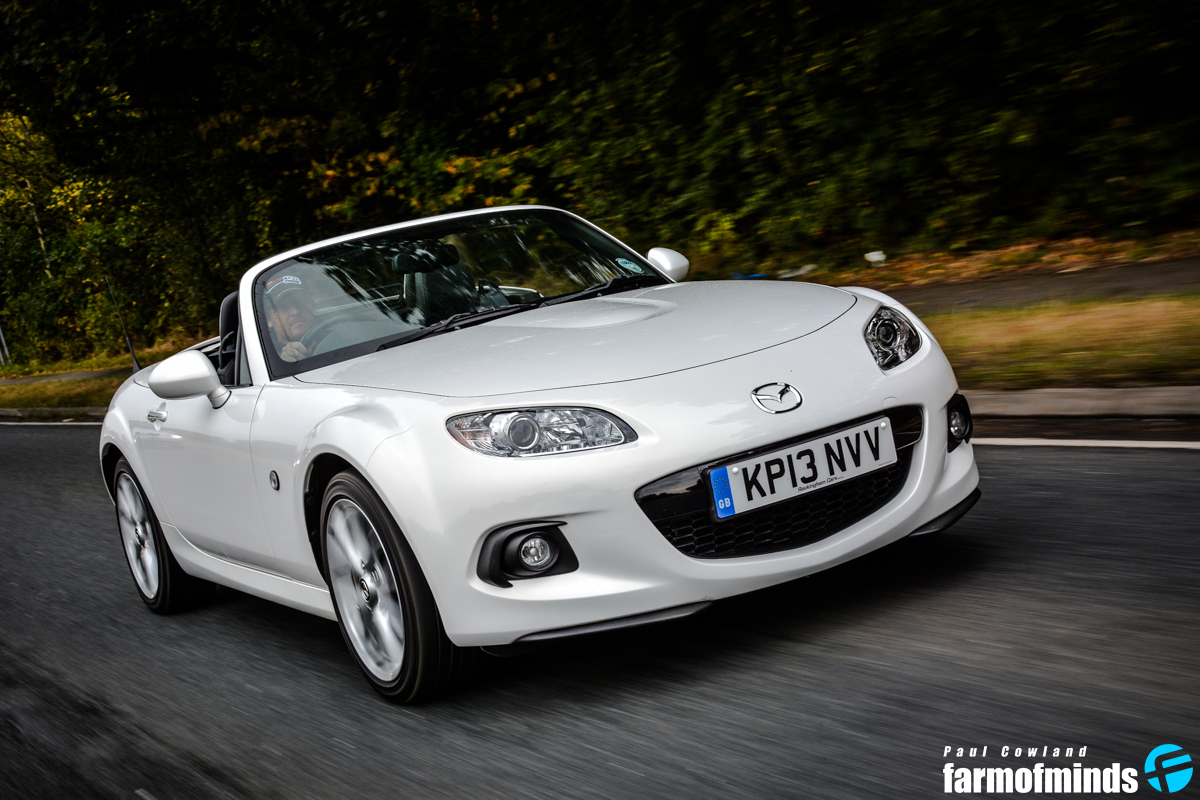 As a rule, people that buy third-generation Mazda MX-5s are enthusiasts that recognise how the physical attributes engineered into the car – light weight, perfect balance, ideal front engine and rear-wheel drive configuration – speak to the inner petrolhead and reward press-on drivers with a superb dialogue of feedback. These same enthusiasts also realise that the varied demands of the world market have forced Mazda to sanitise elements of the engineering to please more of the people more of the time. We frequently find these areas explored and tweaked within the aftermarket. 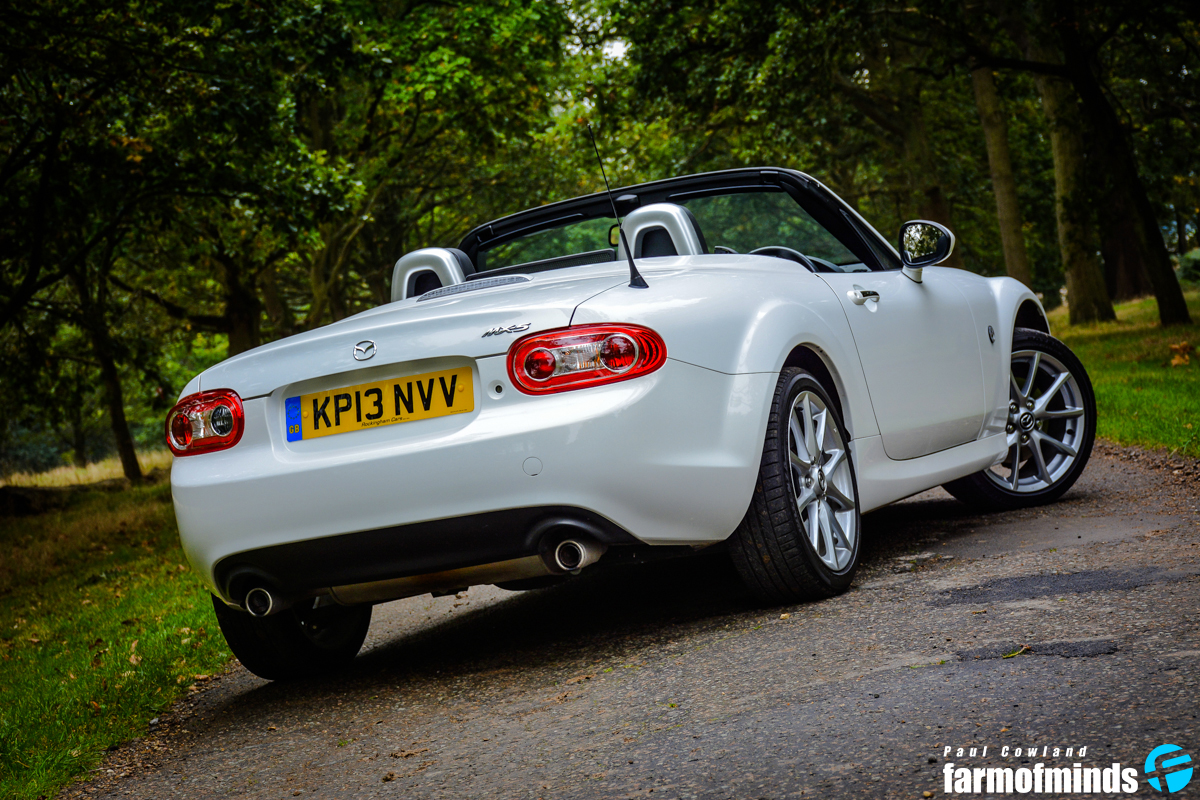 While forced-induction, race-spec suspension and a free-flowing exhaust system will elevate the little roadster’s performance into giant-slayer territory, the reality is that most MX-5s in this country are bought because they have a broad range of talents. They need to handle the school run, commute, shopping and holidays, as well as the odd track day or Sunday blast. What’s more, the relative youth of many third-gens on the road means that they are often still within the manufacturer’s warranty period. And if there is one thing that will dissuade anybody from straying away from standard, it’s the thought of jeopardising that peace of mind. 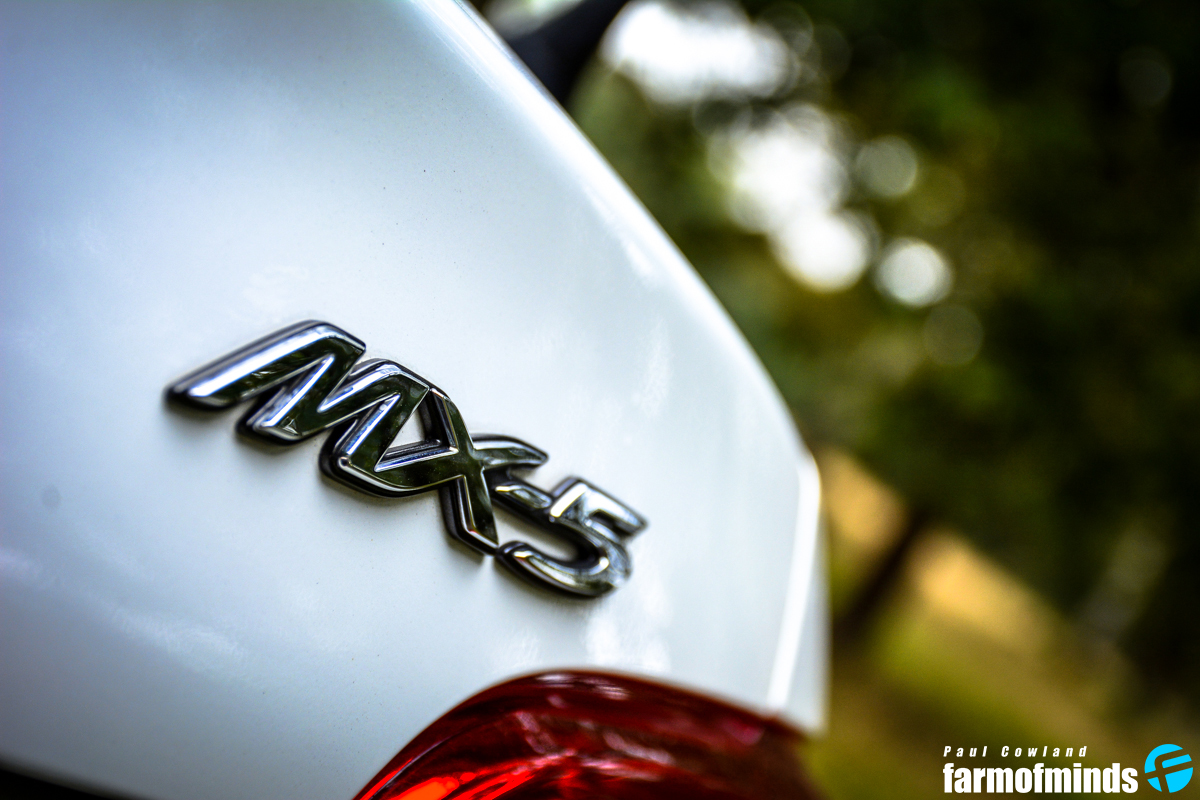 So what we want to know is this: Is there one product out there for the third-generation Mazda MX-5 that will allow enthusiasts to scratch their modifying itch and make tangible improvements to the feel and performance of the vehicle? Can it retain the personality of the car, keep it usable, dealer- and insurance-friendly, and offer some form of reassurance to the owner that it won’t immediately invalidate the warranty? The electronics experts at EcuTek would like to propose their ProECU Tuning Suite with added RaceROM features as a solution to this issue.

EcuTek’s solution is all about control, because as the saying goes, power is nothing without it. The company has been at the forefront of ECU tuning for 20 years and its latest development for the third-generation MX-5 allows an EcuTek tuner to recalibrate the original ECU with the equivalent of a university degree. By integrating sophisticated ProECU software into the Mazda’s brain it is endowed with layers of control and enhancement that the factory education could never hope to offer. 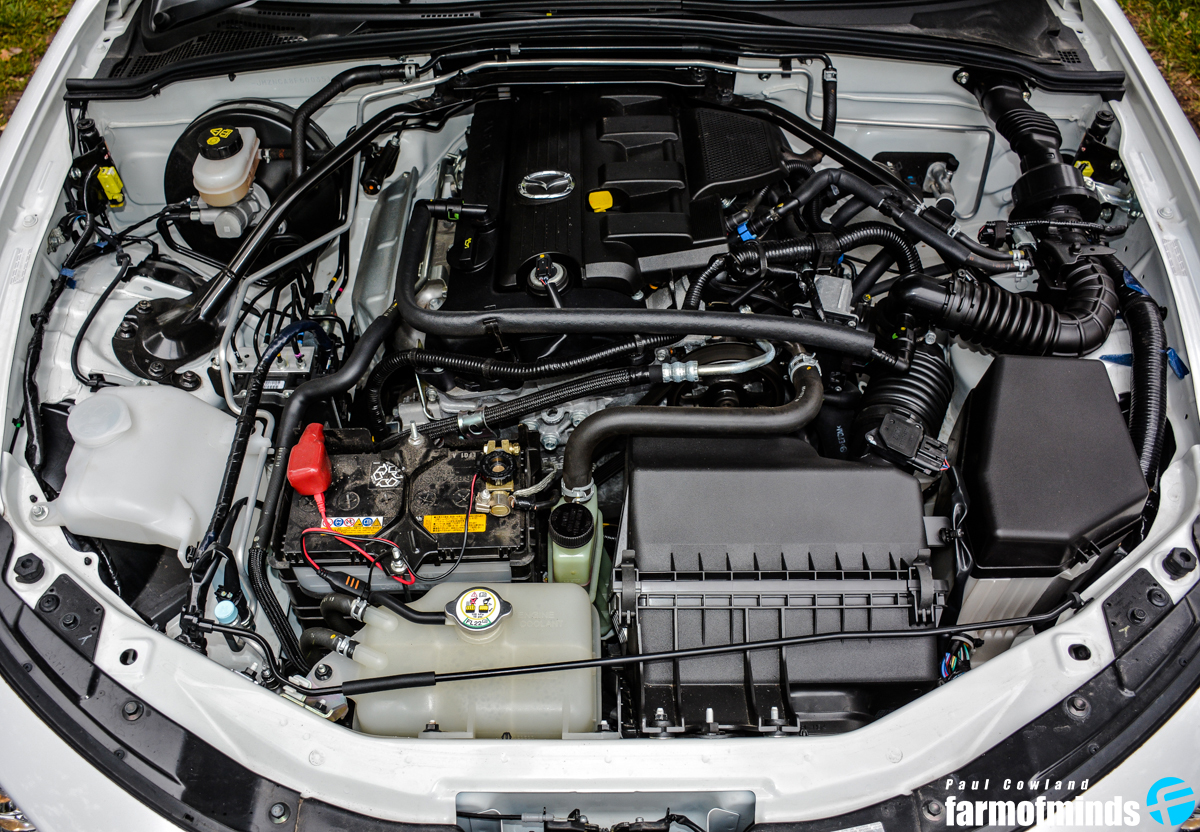 The ProECU software allows the tuner to release more power and character from a mechanically standard engine by being able to reveal and modify every important control parameter. And it does this without losing any of the essential safety parameters built into the OEM ECU.

At the very least, all fuel maps, ignition timing maps, cam timing and knock control are expanded in ability and then fine-tuned to enhance engine performance under all circumstances. But ProECU also offers the kind of optimisation controls you might only expect in expensive standalone ECU options, such as intake manifold runner control, as well as both speed and rev limiters. This latter feature would be useful if, for example, you wanted to extend the cut-off point so that you could hit 62mph in second gear.

Such is the capability of EcuTek’s ProECU software that it can accommodate safe engine tuning way beyond the original specification, including forced induction setups. So EcuTek’s solution is not just about enhancing what you have right now, it’s future-proofing the MX-5’s ECU for future activity.

Please, sir, can I have some more?

Having developed the brain-expanding ProECU tuning suite, EcuTek knew there was room within the reprogrammed ECU for extra functionality. Admittedly, not everybody is going to need or want more features, so EcuTek has released this as part of its RaceROM upgrade package. 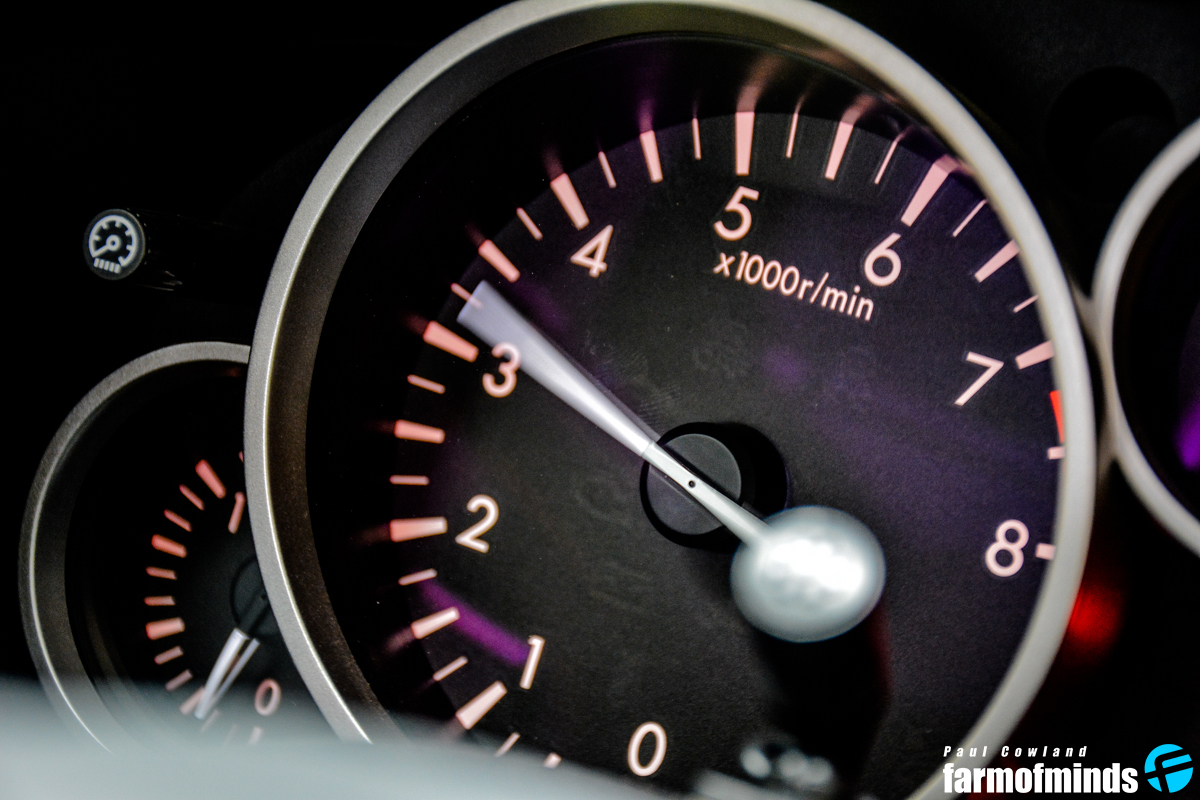 The extra features include adjustable launch control giving you the ability to pick what revs you want to launch at, flat-foot shifting so you can keep your foot pinned to the accelerator when changing gear, throttle blips on downshifts, different rev limits for each gear, and the ability to switch between four separate ECU maps. 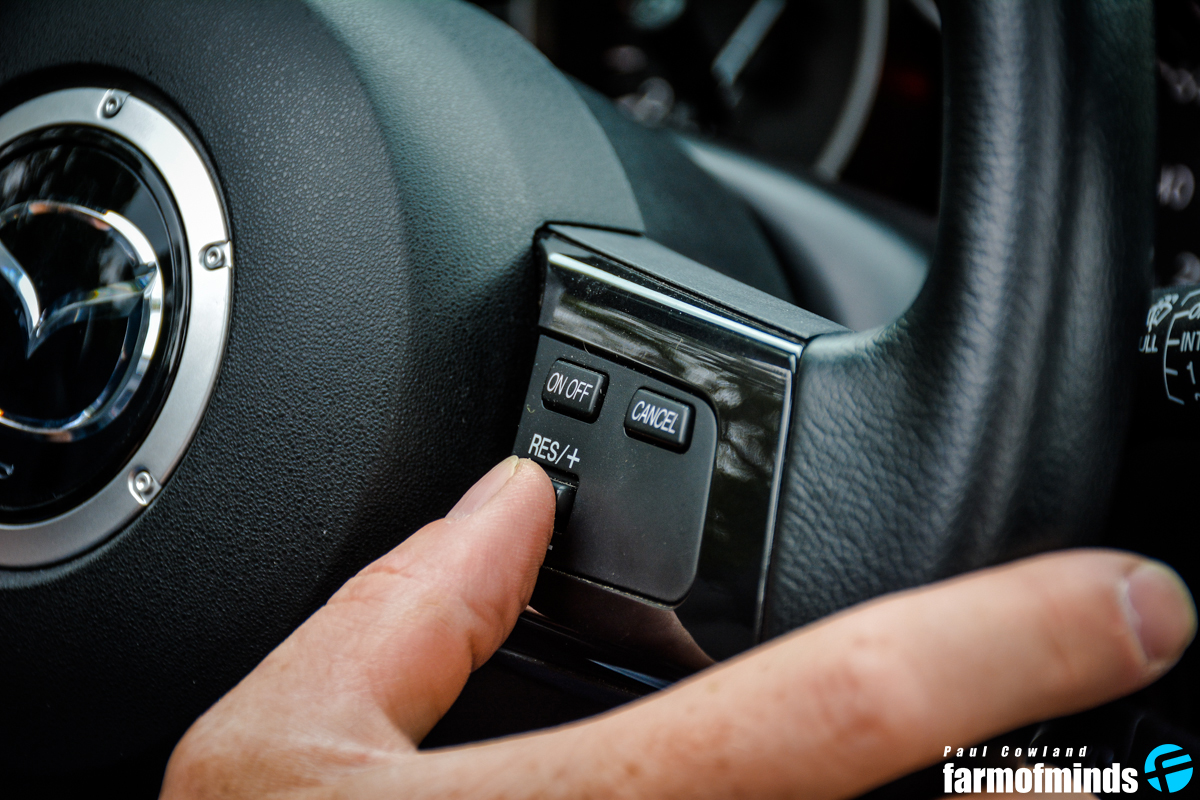 All RaceROM features are designed to be easily activated or adjusted by the driver. This is usually carried out by accessing the setting programme and making adjustments via the cruise control toggle on the steering wheel.

The first thing which strikes you about EcuTek’s sparkling white MX-5 (Tuned with ProECU and including the unique RaceROM features) is that it looks totally standard; there is nothing visible on the inside or outside to suggest anything has been altered. Fire up the engine from cold and it quickly settles into the same even idle you would expect of a factory car. You can play with the buttons and controls of the interior like a hyperactive child and no clue is revealed that these possess anything other than their normal function. We also know that if we attached a reader to the car’s diagnostic port, nothing abnormal would appear there either. In terms of invisibility, this is the best game of Where’s Wally you’ll ever play! 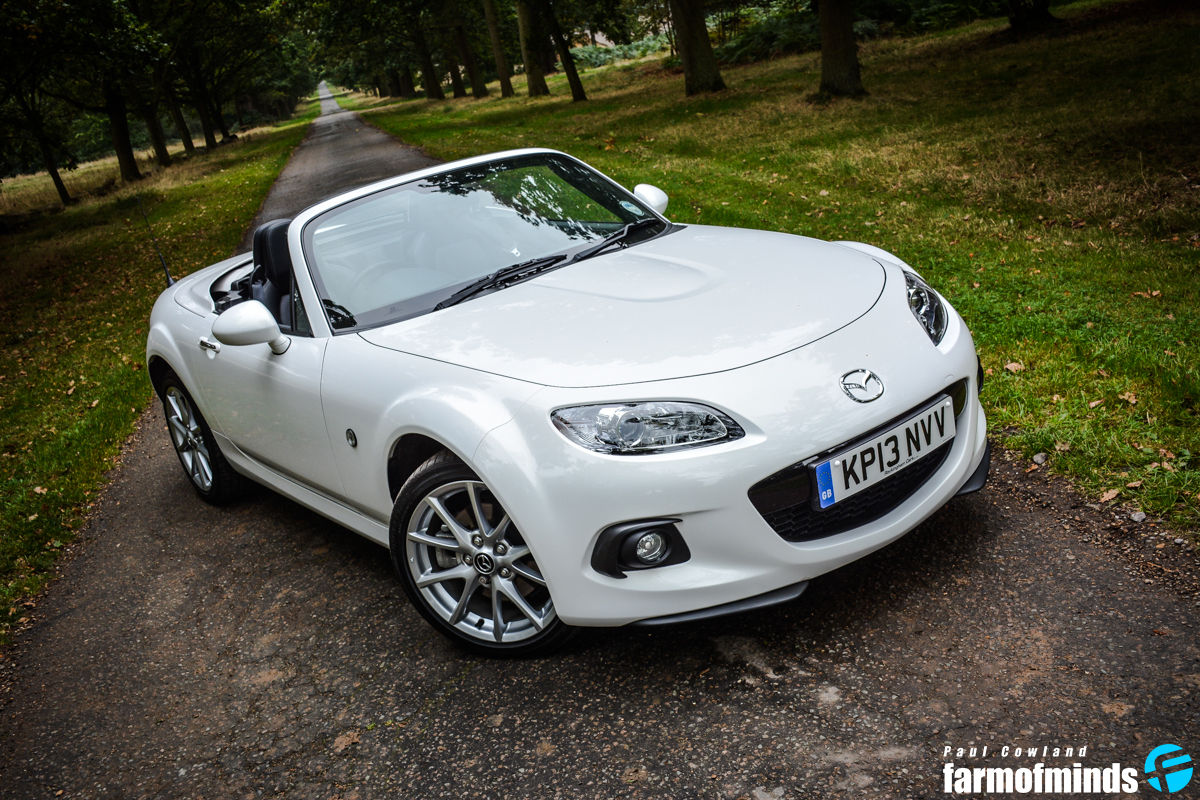 The only way to drive a sportscar like the MX-5 is with the roof down, so with a clear view of the sky we set off, senses poised. From a driver’s point of view, being behind the wheel of an MX-5 is always an occasion but within a few short metres we began to sense that there was something a bit more special about this particular one. It had nothing to do with the steering, chassis or exhaust sound, of course, because what has been modified is unrelated to these items. Perhaps the ECU is a more pivotal component than any of us realised and it has the ability to radiate sparkle to other areas. 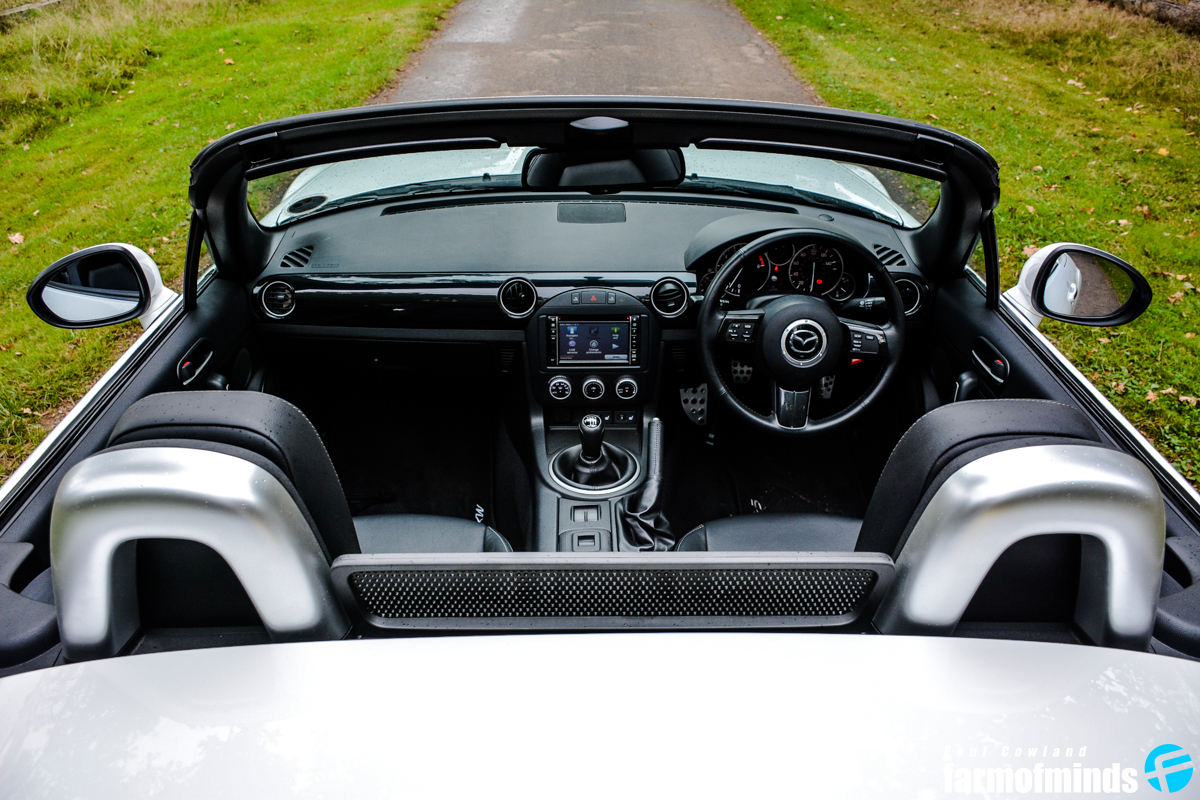 Yes, that’s the word that best describes this car – sparkle. It retains everything we love about the MX-5 but heightens those defining characteristics like it has been injected with a wonder-drug. The throttle response is more crisp and immediate and there is no hint of a flat spot in the rev range, just an energetic rise in the medium-speed work rate and what feels like an extra surge at the top-end where the revised cam timing really comes into play. In fact, there is a keenness to gobble up revs that tricks you into believing the flywheel has been lightened or there is more power under the bonnet. 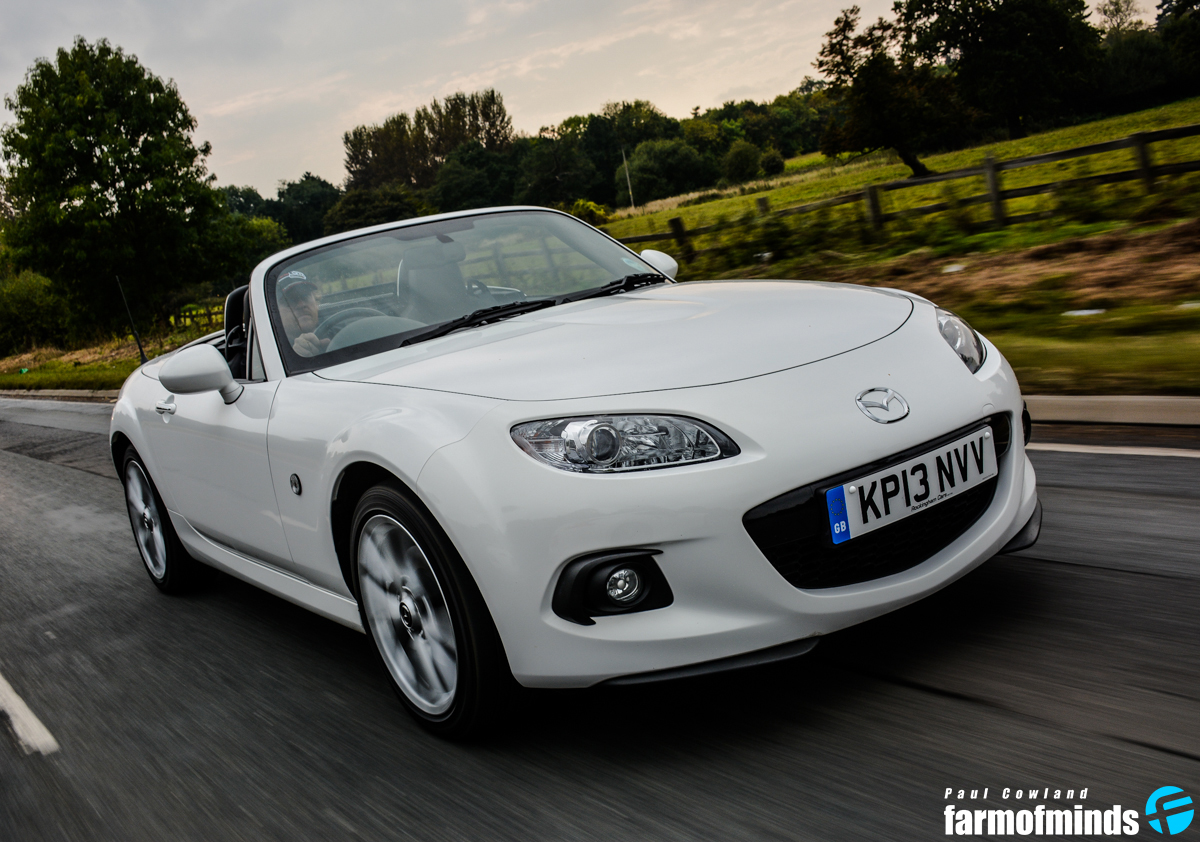 As the dyno sheets show, the power increase for the MX5 is tangible, raising the bar with an impressive increase of over 20bhp and 25 Nm of torque over standard when combined with a good quality sports exhaust system and the skills of an EcuTek tuner. Importantly it definitely feels quicker and more enjoyable. That quality of ‘feel’ is, after all, what the responsive little MX-5 has always majored on and from an ECU perspective is what we would expect a company with EcuTek’s OEM credentials to be able to deliver. Best of all, should you fancy upping the ante with more componentry at a later date, even up to and including some kind of forced induction package, then the EcuTek software is easily able to cope with any breathing or power changes you might want to make. Completely future-proof, then! 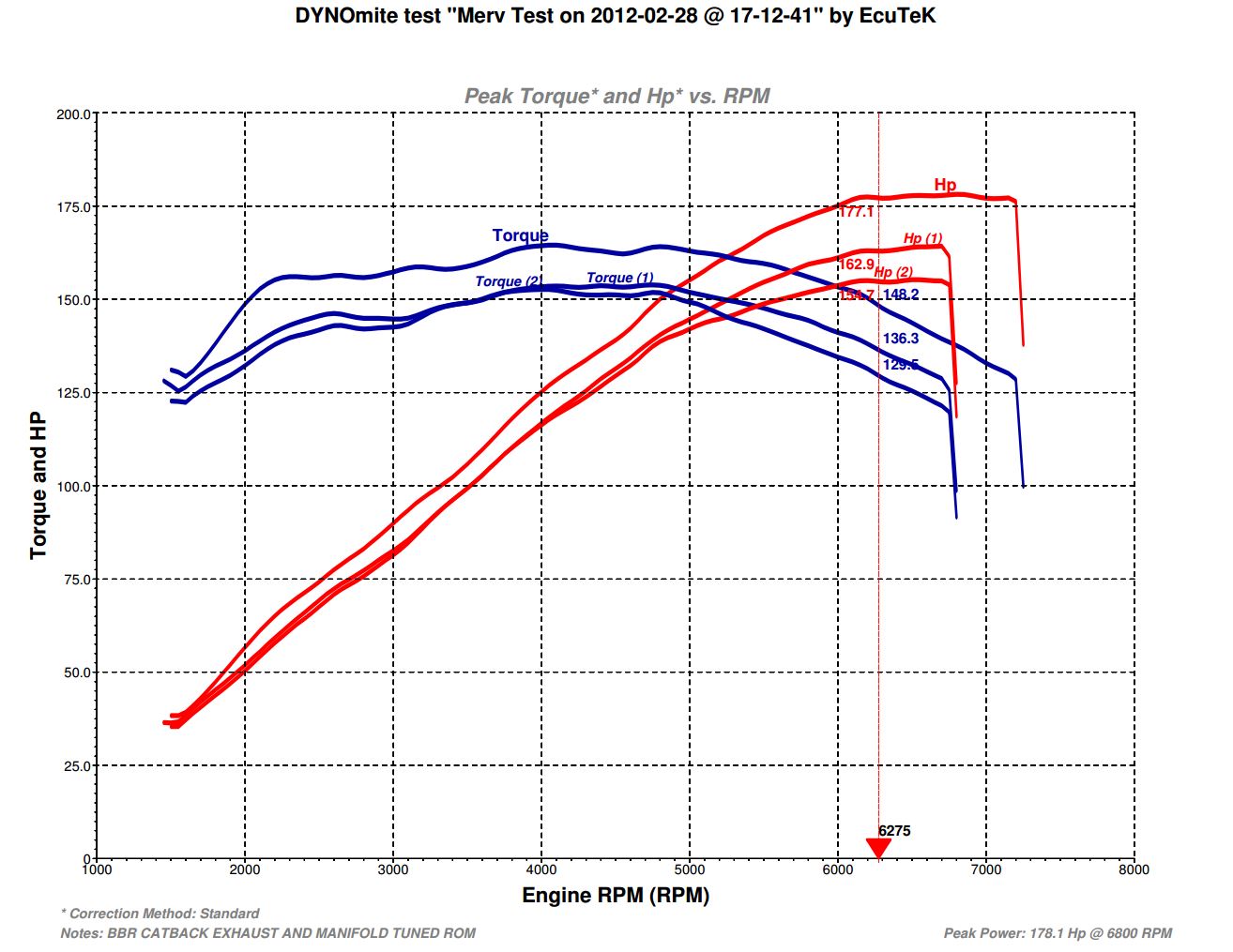 We would definitely recommend the ProECU Tuning Suite package with RaceROM features and sports exhaust system as an ideal factory-style conversion. The addition of RaceROM on this car may not be strictly necessary but you would struggle not to justify their existence once tried. Auto-blip on downshifts will have passengers look at you in awe of your heel-and-toe dexterity, while launch control can be dialed in to offer the perfect combination of revs and wheel spin every time you accelerate away from the lights. Imagine the fun you could have putting the car in Valet or Economy modes for your partner and not giving away the de-activation sequence. Equally, the fun you could have with a special Race mode designed specifically for track days with high-octane fuel in the tank. As we said, it’s all about control… 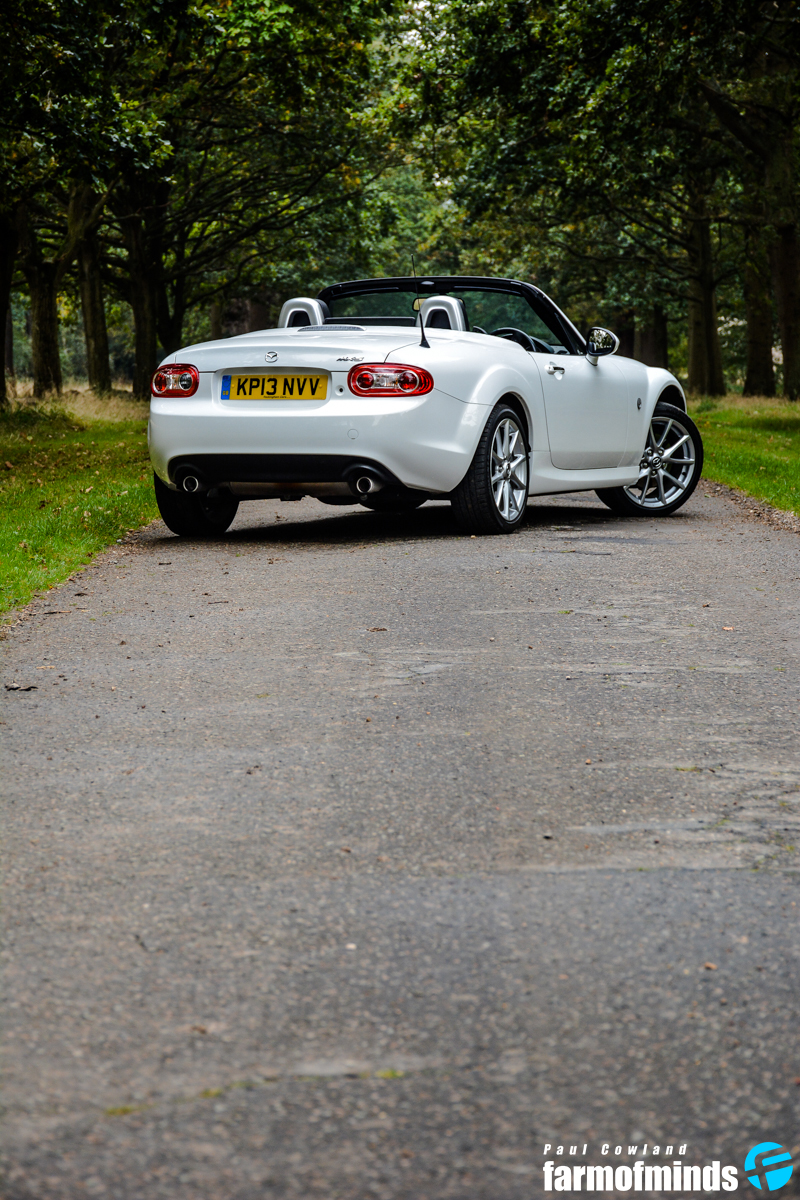 The EcuTek software supports all 1.8- and 2.0-litre petrol engines found in the third-generation (NC chassis) Mazda MX-5 built from 2005 onwards. EcuTek tested over 100 different MX-5 ECUs from all international sales regions to ensure that every model permutation was covered and that the software would be a safe and effective tuning solution, irrespective of the car’s origin. The best gains are to be found on the earlier generation 3 models. 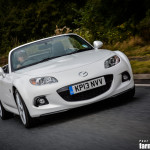 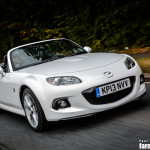 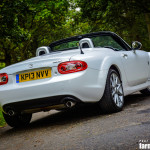 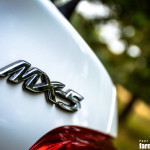 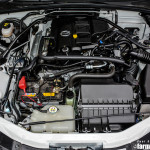 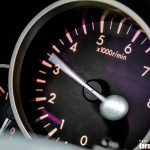 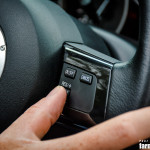 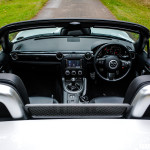 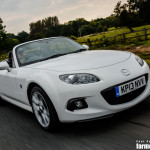 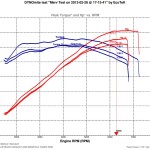 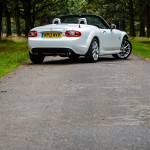