A lot of people, myself included, might be a bit too young to recognise or truly grasp the significance of the Mugen GT-4 CRX. Campaigned in the mid 1980’s as part of the SCCA GT4 series, this car was a joint venture between Honda America and Mugen Japan, with the US outfit providing the suspension and bodywork for the ’84 donor chassis, and Mugen bringing their expertise to bear on the engine and drivetrain. It was a successful package, winning its debut at Road Atlanta in 1985 and going on to take the National Championship in ’85 and ’86. 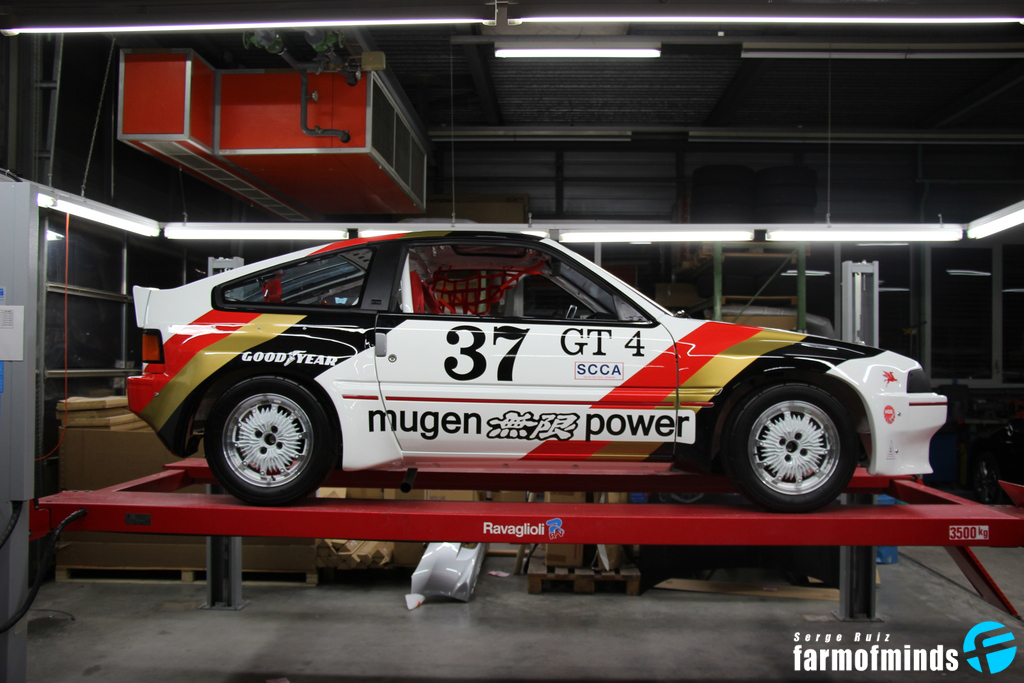 One person to whom its impact was not lost was French based mechanic and bodywork specialist Serge who, as a long time CRX addict, immediately recognised the latent potential behind the very sorry looking 1985 car he acquired back in early 2011. Having spotted a replica version of the Mugen bodykit being sold online, and not being a man to shy away from a bit of hard work, Serge resolved to transform this shed from scrapyard fodder into a faithful GT4 replica. 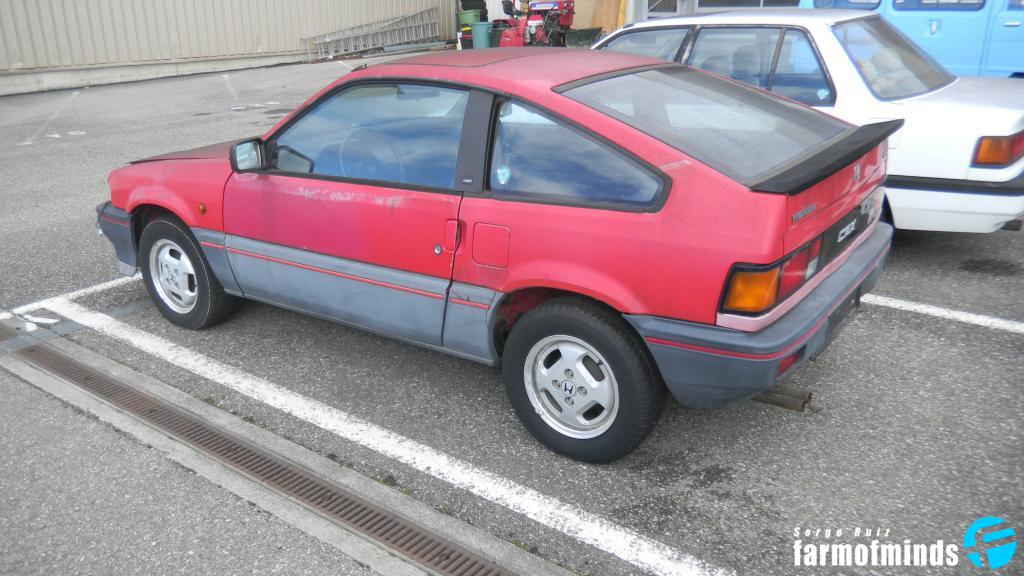 But before any of this could start, Serge had to attend to the integrity of the neglected bodyshell. Twenty-six years of exposure to the elements had not left this particular CRX in a particularly roadworthy condition, and the rust and rot was fairly extensive around the wheel arches, side sills and boot floor. The car was quickly stripped back to the bare shell and then sanded down before work began cutting out the offending bad metal and welding in new sections. Whilst Serge was busy replacing and repairing large sections of the chassis, the aforementioned Mugen replica bodykit made a welcome arrival at his bodyshop. Manufactured by a Canadian company called Houseman Autosports in Ontario, Canada, it is believed to be the only example in Europe, and consisted of the flared front and rear arches that gave the racecar its foursquare stance, along with a deeper front bumper and a redesigned header panel. 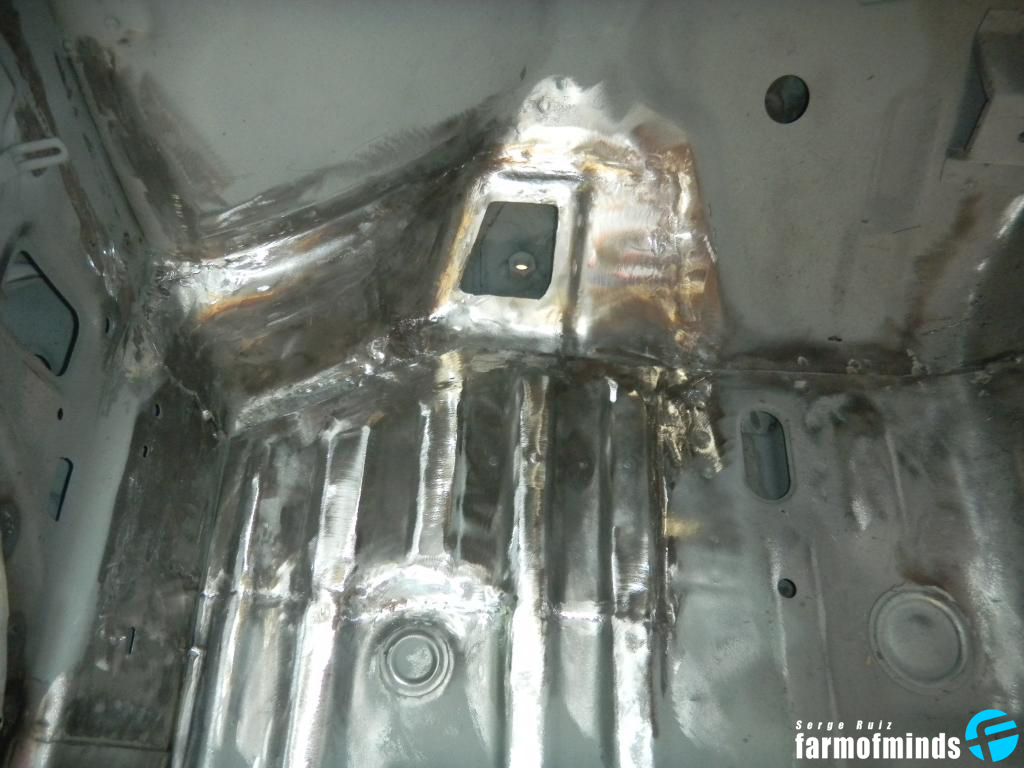 Acquiring the correct panels can often be one of the biggest headaches when trying to build a racecar replica, so you would be forgiven for thinking that not having to fabricate any of his own panels made achieving the correct look a lot easier. But given the scarcity of information about the original car on which it was based, and without any supplied guidance on how to mount or secure it correctly to the shell, Serge had an extremely tough time getting everything properly located. His absolute commitment to achieving a factory finish to the whole kit only added to the weeks of fitting, cutting, filling, smoothing, and swearing required to realise his vision of a replica whose homage was more than just skin deep. 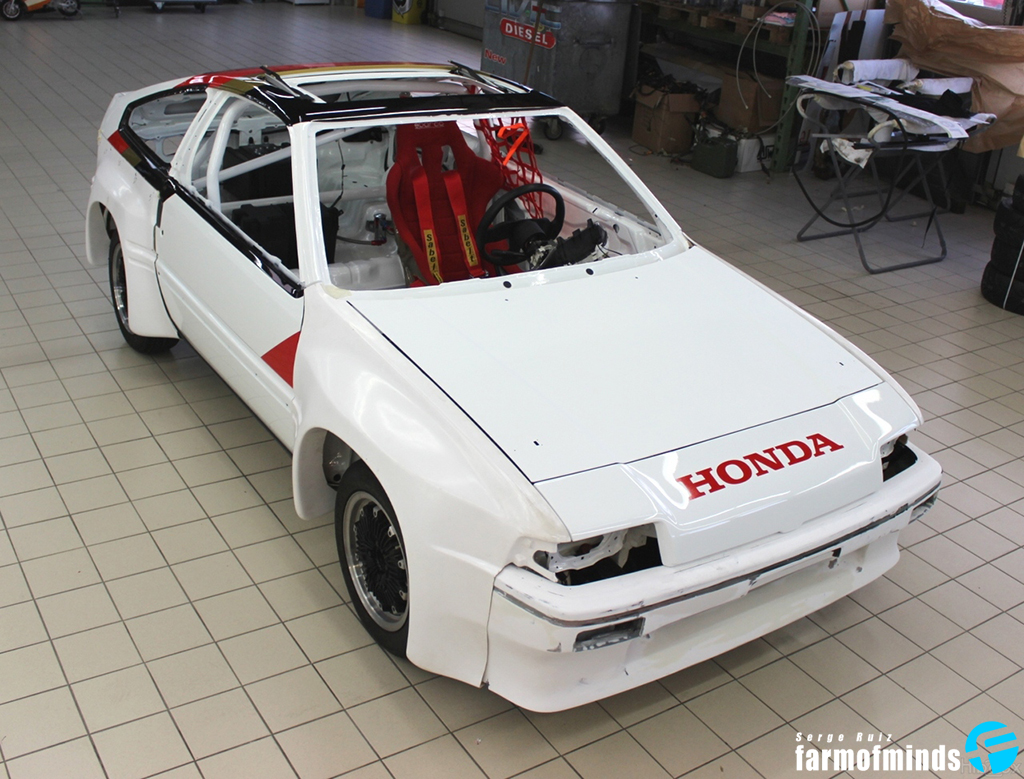 One year in, and with the shell preparation finally complete, painting could finally begin. The rolling chassis was wheeled into the painting room where an epoxy undercoat was applied all round, followed by an anti-gravel layer to protect the underside of the chassis, and lastly a topcoat of Grand Prix white, the signature colour for the Mugen design. The rest of the livery was then sprayed directly onto the topcoat to create an authentic finish and garnished with period stickers sourced (painstakingly) from the dark corners of the internet. 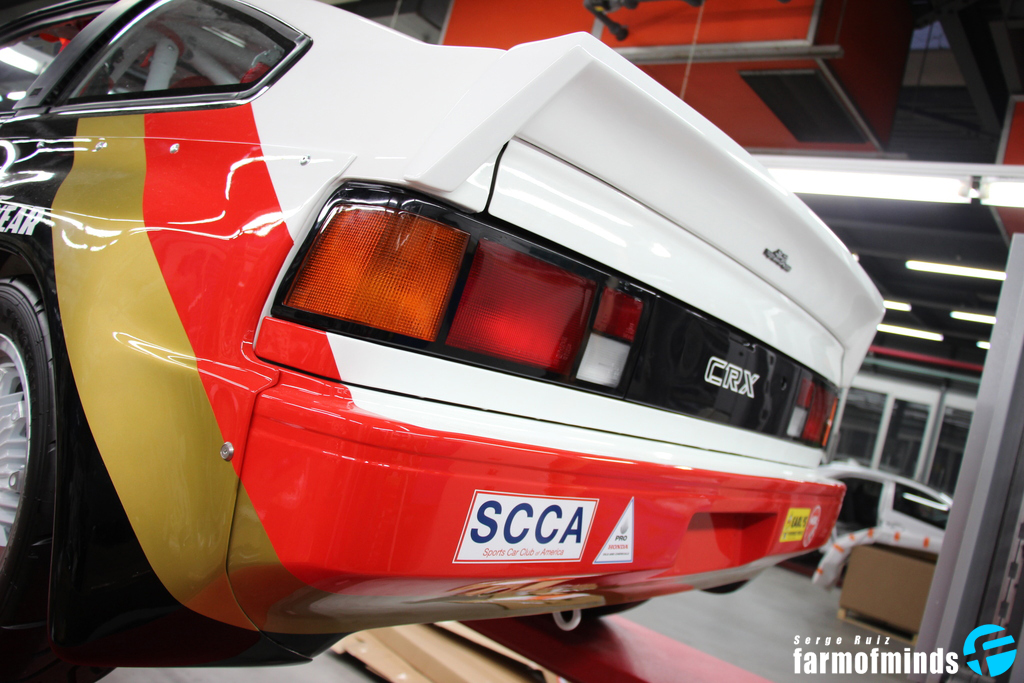 Moving inside, the original car used a custom dash arrangement, and so Serge’s car was going to follow suite. Using just a handful photos of the Mugen arrangement, he fabricated and fitted his own version from sheet metal, trimmed in microfibre for an authentic racecar feel. Finding the original driver’s seat was going to be a much tougher challenge however, and after Sparco themselves confirmed it would be impossible to source one, Serge settled for a more modern version that was already sitting in his warehouse. It’s not an exact match, but you have to look pretty closely to spot the differences, so the spirit of authenticity is preserved. A Mugen steering wheel completes the period cockpit. To the rear Serge fitted a JEGS 5 gallon aluminium fuel cell on a custom frame in the boot well, and covered the whole arrangement with an aluminium panel and access hatch that aped the few photos he had of the original car. In fact the only deviation you’ll find inside is the fitment of a standard seatbelt, just to ensure it is road legal! 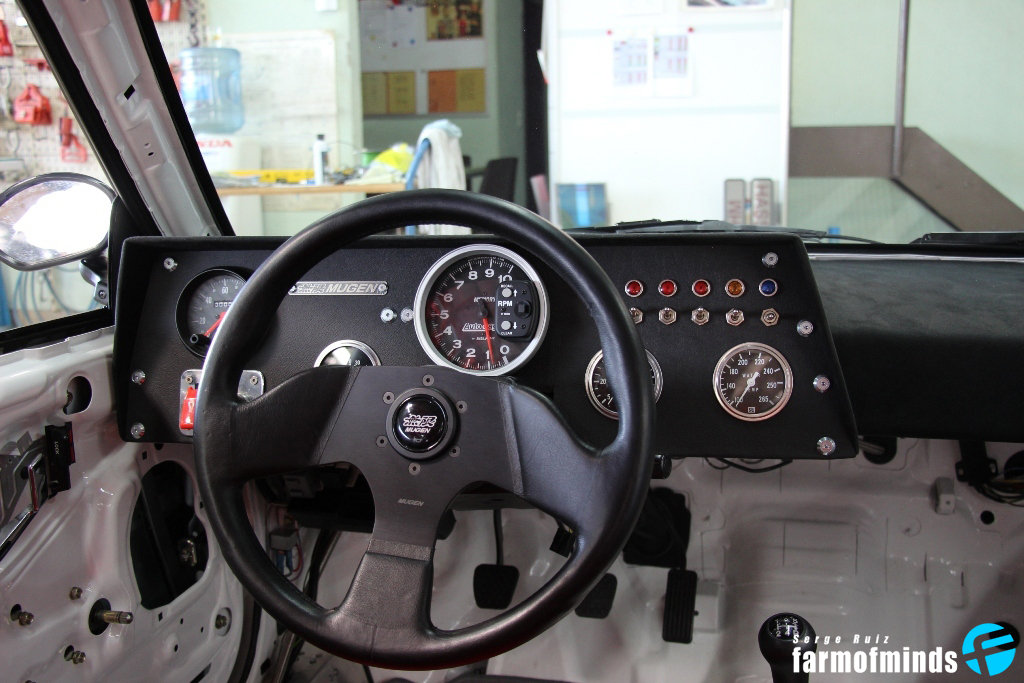 It’s hard to do justice to the amount of care and attention Serge has lavished on this project in so few words; it’s been a two year journey that is only just coming to an end – as we speak minor alterations and period details are being added to ensure the upmost authenticity. So jump to one of the project threads below, make yourself a (large) cup of tea, and marvel at the quality and dedication on display. 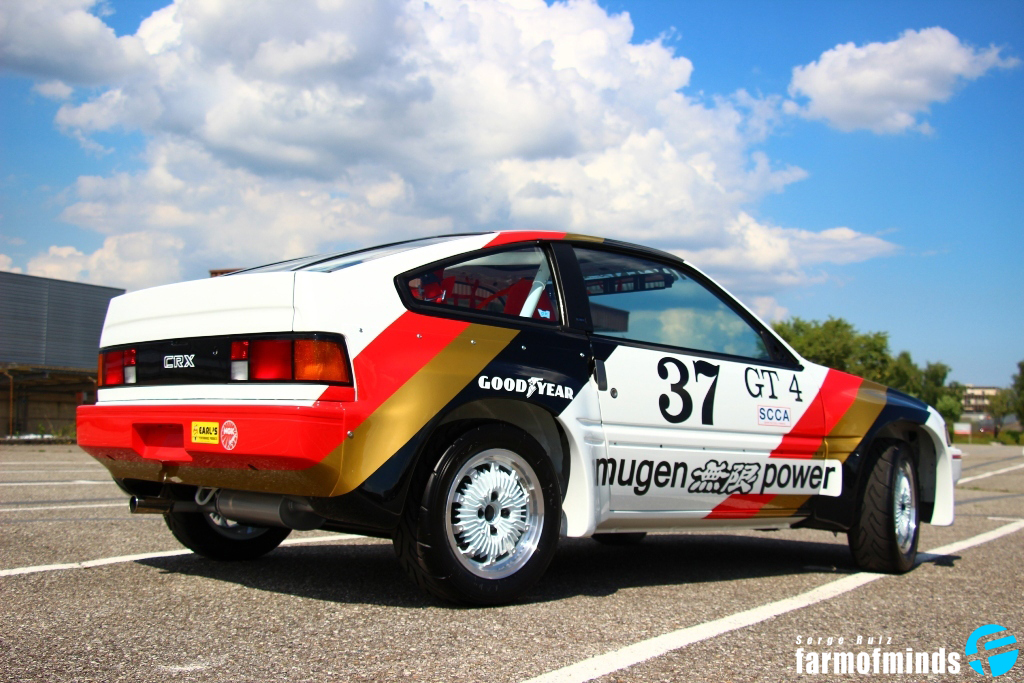 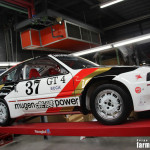 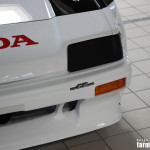 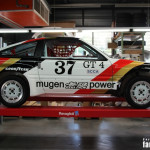 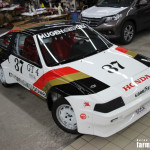 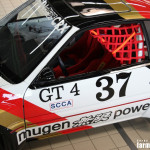 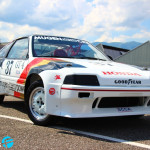 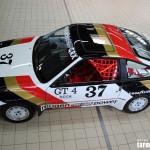 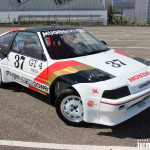 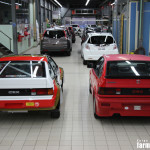 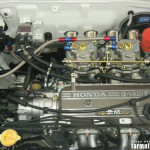 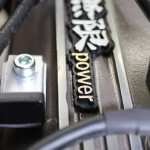 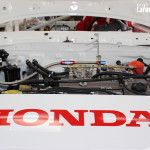 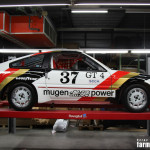 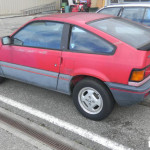 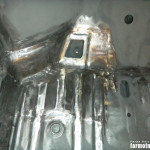 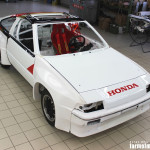 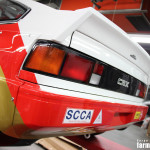 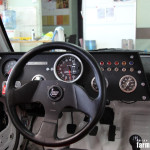 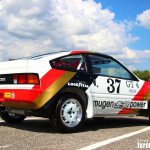