When somebody talks about the Evo, it’s most often in terms of an outrageous power output, indefatigable grip or devastating point-to-point pace. It’s these core strengths that have been continually refined and honed by Mitsubishi over the decades, resulting in a dynasty that now spans ten generations of the same car, with an eleventh incarnation on the way if rumours are to be believed. Not only is it the tuner’s favorite, the V & VI are quickly becoming modern classics. 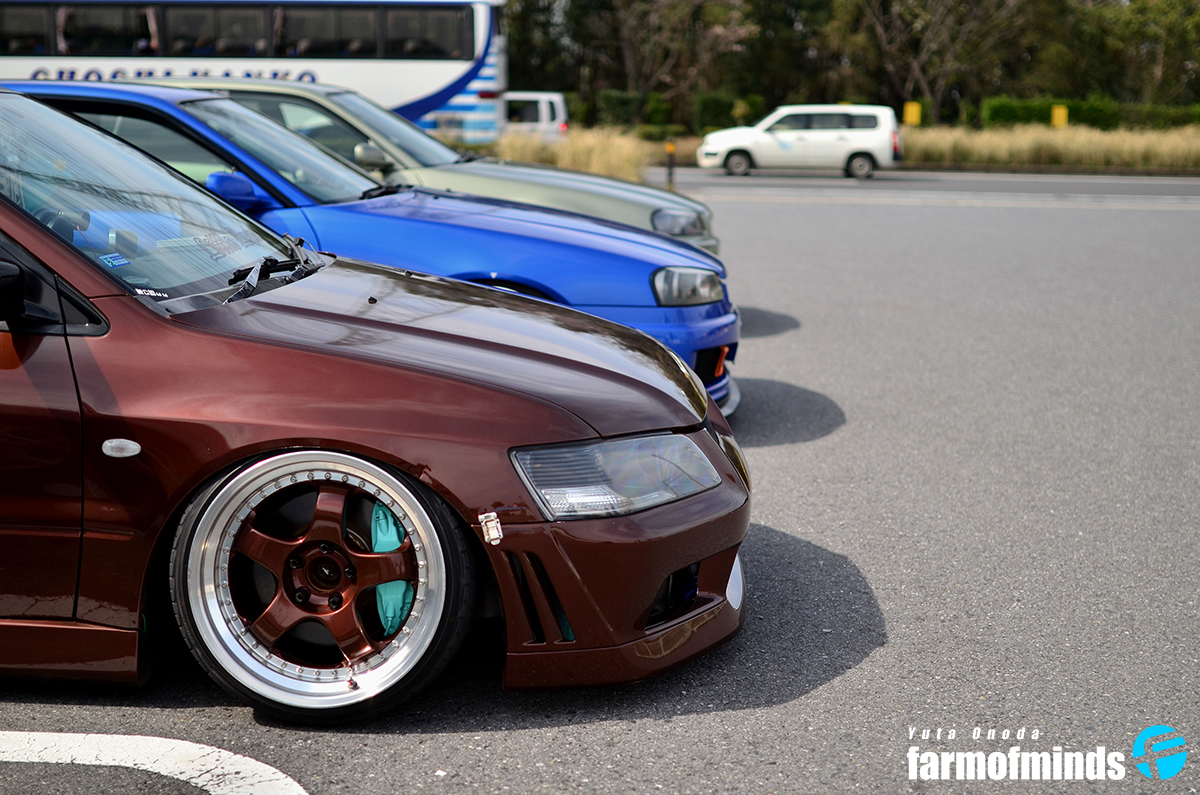 However, strange as it may seem, not everyone who buys an Evo is as interested in its outright performance as you might suppose. While it’s still quite rare to see examples here in Europe, there is an increasingly strong Evo and Impreza counter-culture in the US and Japan where the handling and performance of the car are intentionally compromised in order to achieve a more stylised look. In some ways it’s an ironic form of tuning, and no doubt it’s subverting the singular purpose of these cars in order to improve their aesthetics that makes them such an appealing choice to modify in this manner. 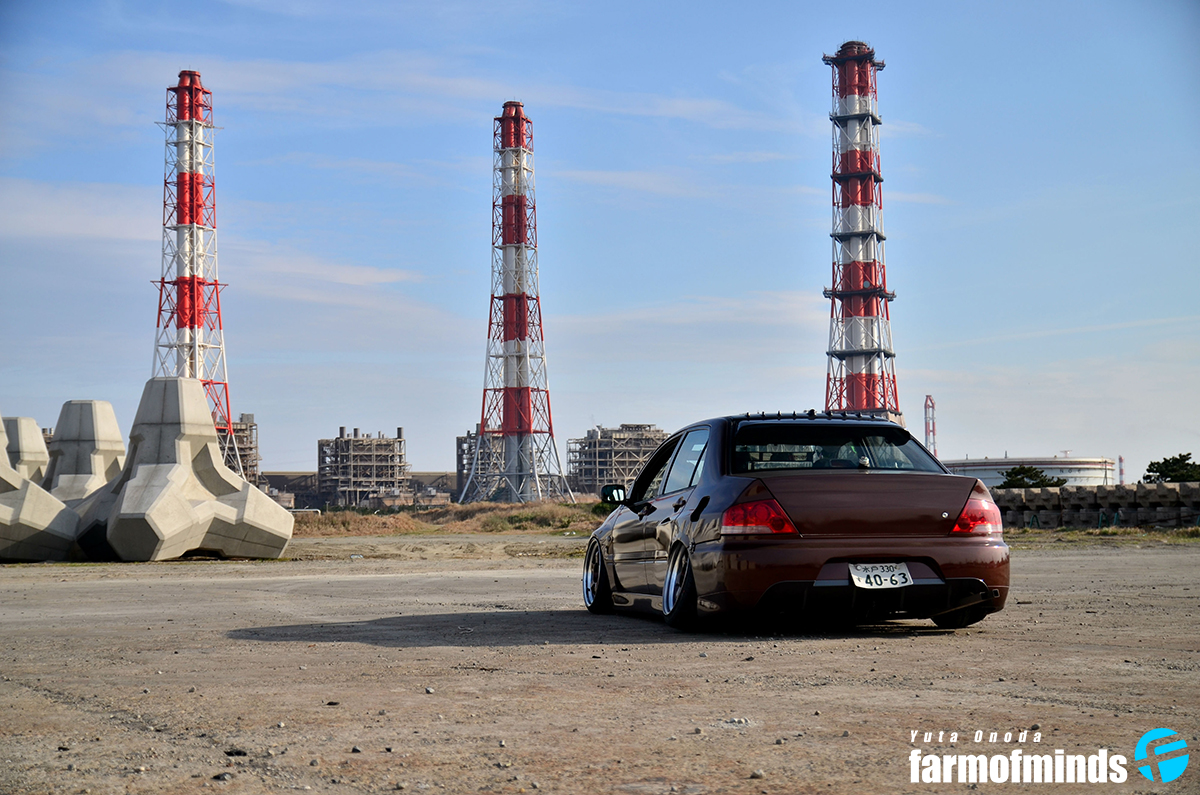 One of the most extreme examples I’ve seen in recent years is this wicked Oni-Camber Evo owned by Koki Shinkawa. Starting with a standard spec Evolution VII, Koki has sought to create a new vision of the Evo, a dark opposing image of the “rally car for the road” persona for which it is has become so well known. 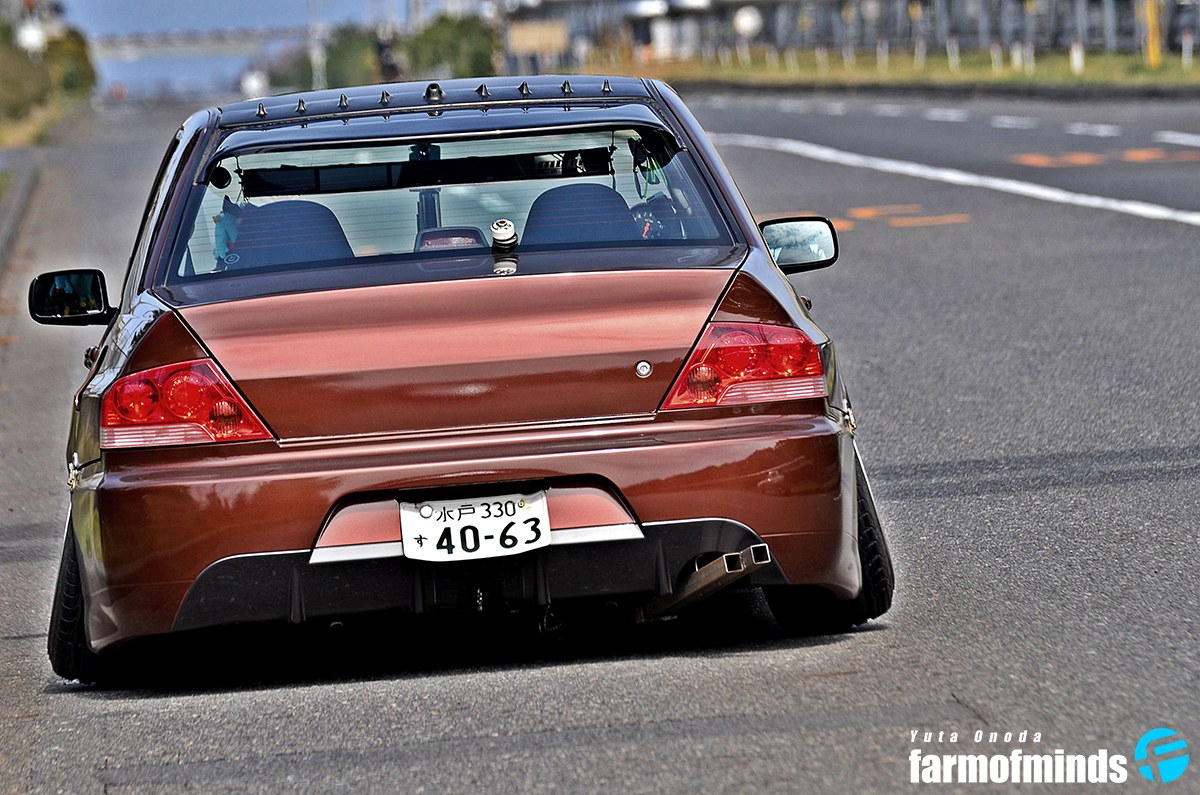 Nothing defines these kind of rally rep machines as much as their large boot spoilers, so that was the first thing to go, along with any trace of badging on the rest of the boot. In a crazy styling masterstroke, Koki sourced the boot spoiler from the base spec Lancer Cedia (poor cousin of the full-blooded Evo) and grafted it onto the rear windscreen to create a custom one-off look that’s reminiscent of Civic styling. 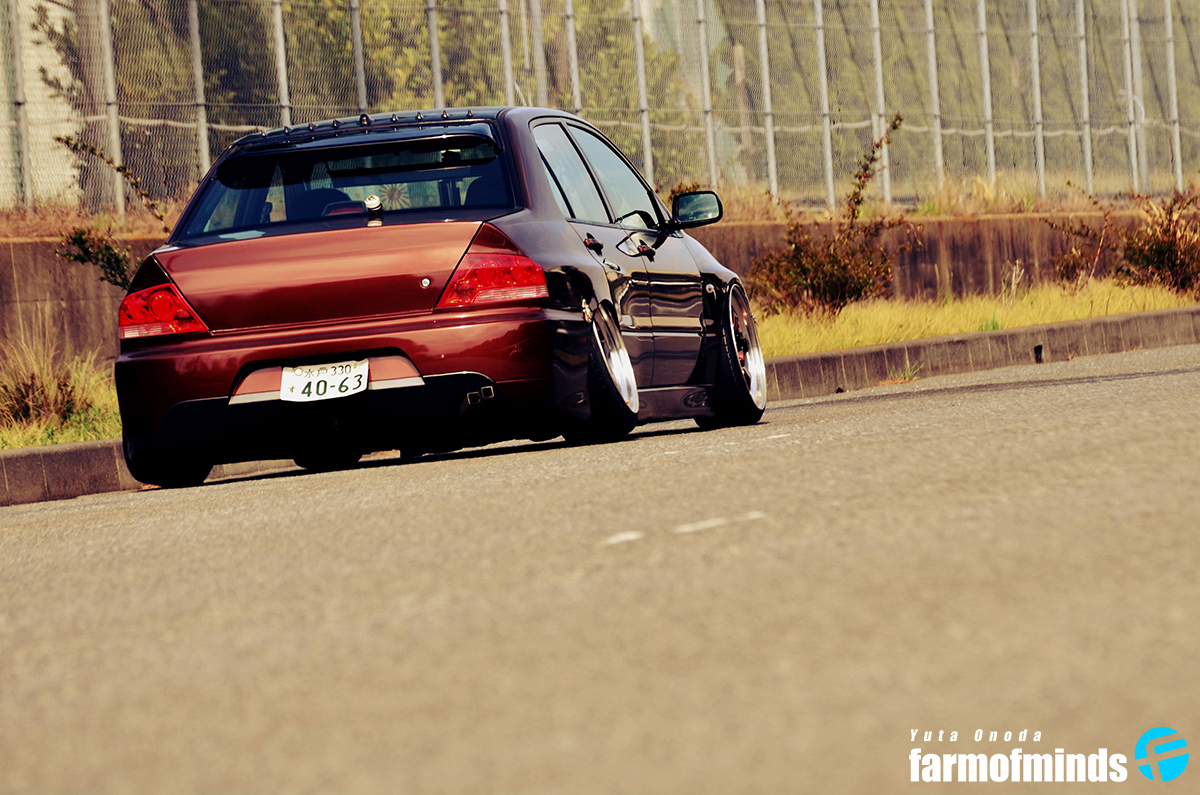 Raiding the Mitusbishi parts bin further, the rather slab like VII rear bumper came off, and an Evo IX item was sourced to replace it, bringing a more aggressive look and a stylised diffuser. The oversize wing mirrors also come from the Cedia, which combined with the blacked-out headlights and metallic brown respray give the Evo a…dare I say it…cute front end! 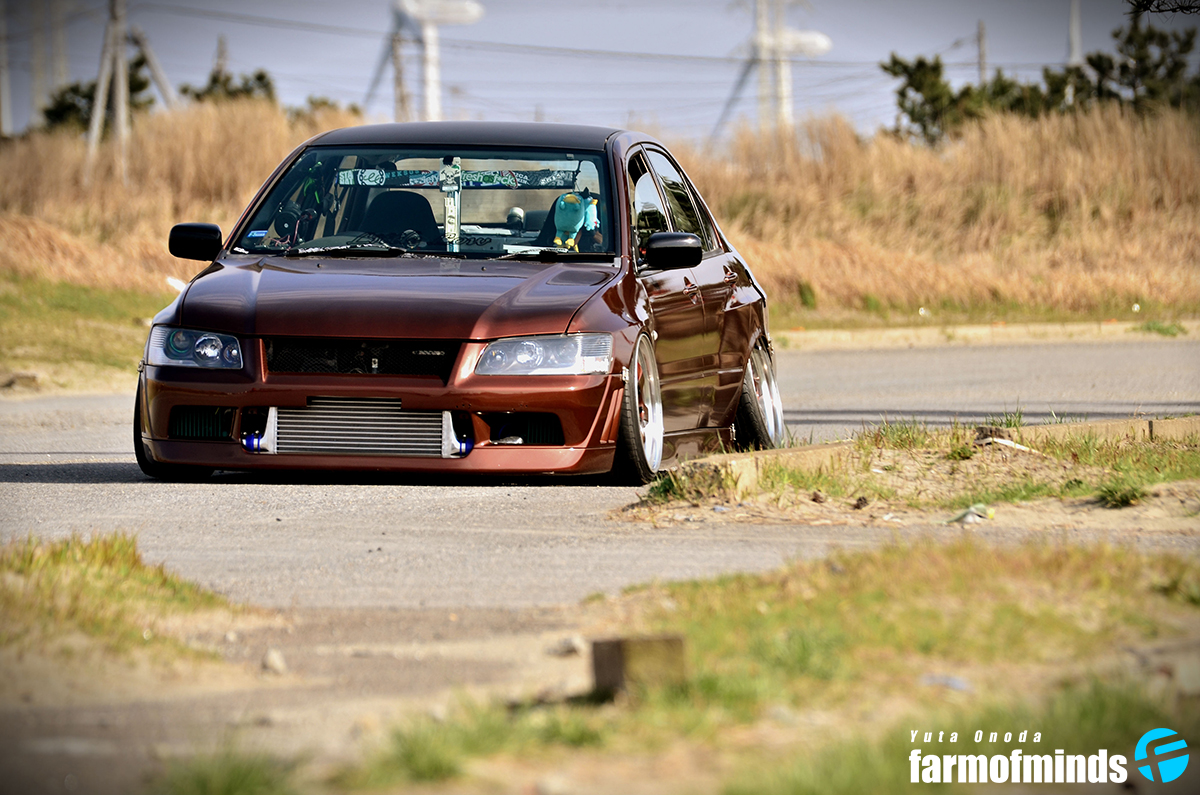 Seeing Evo’s slammed to the floor in the name of performance is nothing new, but this example employs some serious camber to take things to a level far beyond performance concerns. Greddy Type-S dampers are the weapon of choice for getting the car scraping the asphalt, and have been paired with Greddy tie rod ends and Megan Racing control arms to ensure the Evo still steers whilst running such obscene wheel angles. Three piece Works Meister S1 alloys are a truly versatile choice that looks good on nearly any build, but they’re still a rare sight on any Evo. The matching coat of metallic brown for the spokes contrasts nicely with the teal painted OEM Brembos,creating a look that is truly unusual on this sort of car. 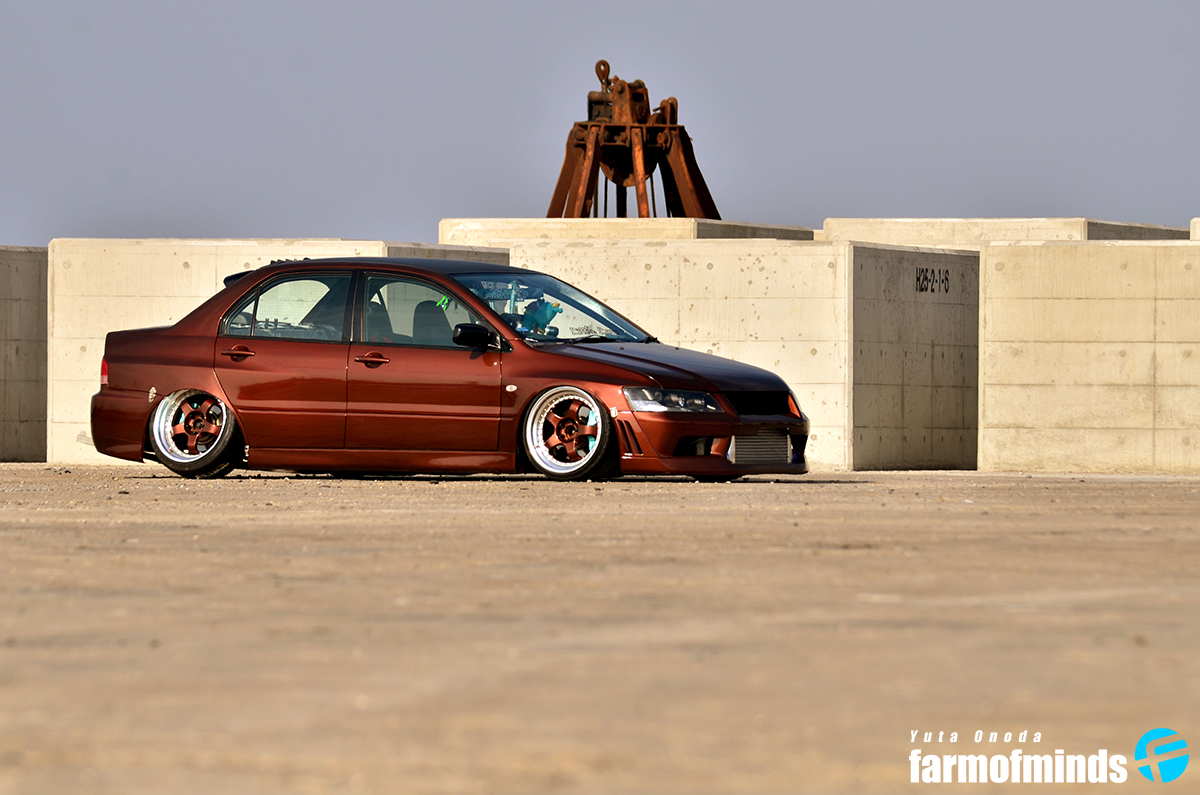 If Koki’s work on the exterior has created a subtler, smoother looking car, it’s the interior where he’s really let his imagination run riot. The pictures tell more than I could ever usefully write, but as visually challenging as it might be, it’s the perfect counterpoint to this Evo build – smooth and sophisticated on the outside, completely mental on the inside! Aside from the contrasting teal dash trim there’s a whopping 60cm high stainless steel shift knob (I have no idea how he changes gear with this), water temp, boost and tach gauges littering the dash and a giant panoramic WINK race mirror. 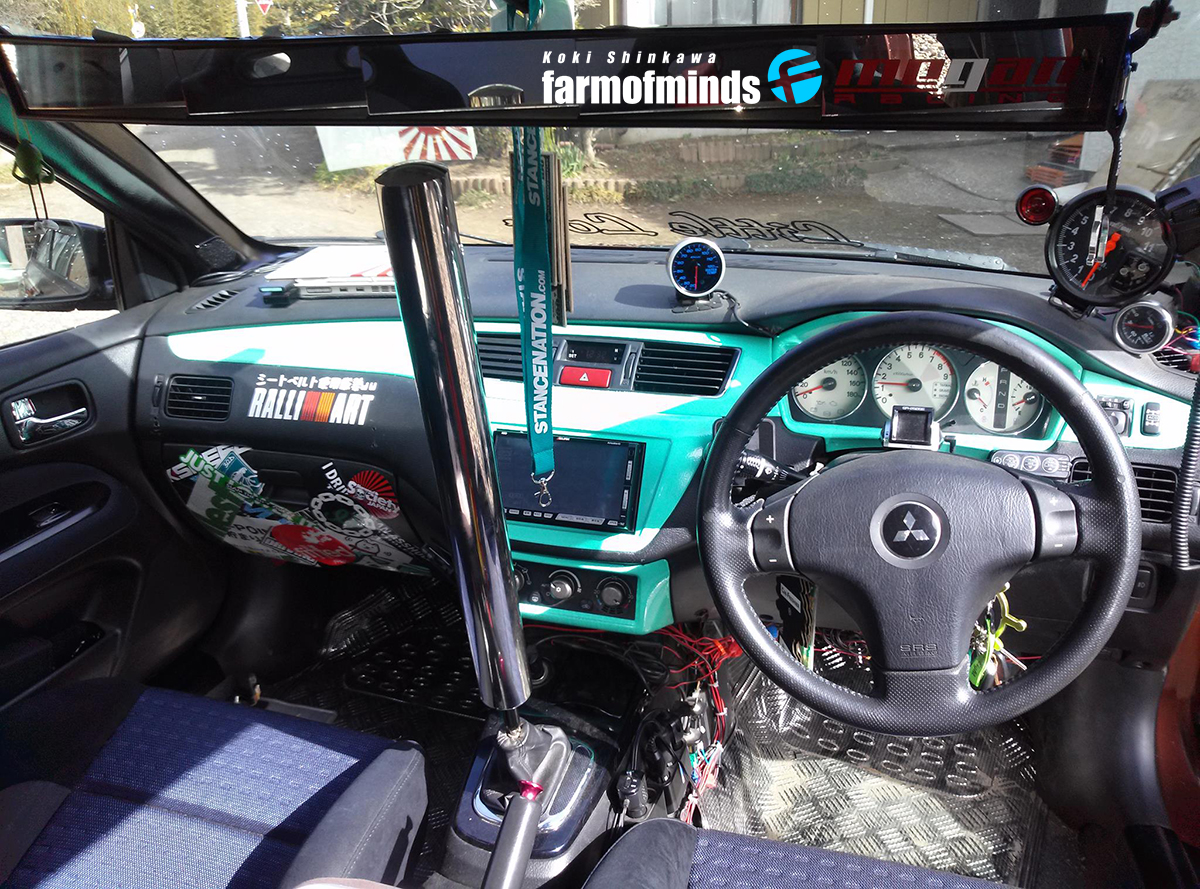 Performance is left untouched as of right now, but I’m sure the car is already exciting enough with circa 300bhp and that much stance. The only tuning concessions are, as with the rest of this build, for aesthetics. There’s a polished HPI intercooler kit poking through the front bumper and a Bosozuku style shotgun exhaust jutting from the rear, tweaks that let you know this is not your standard performance Evo build. 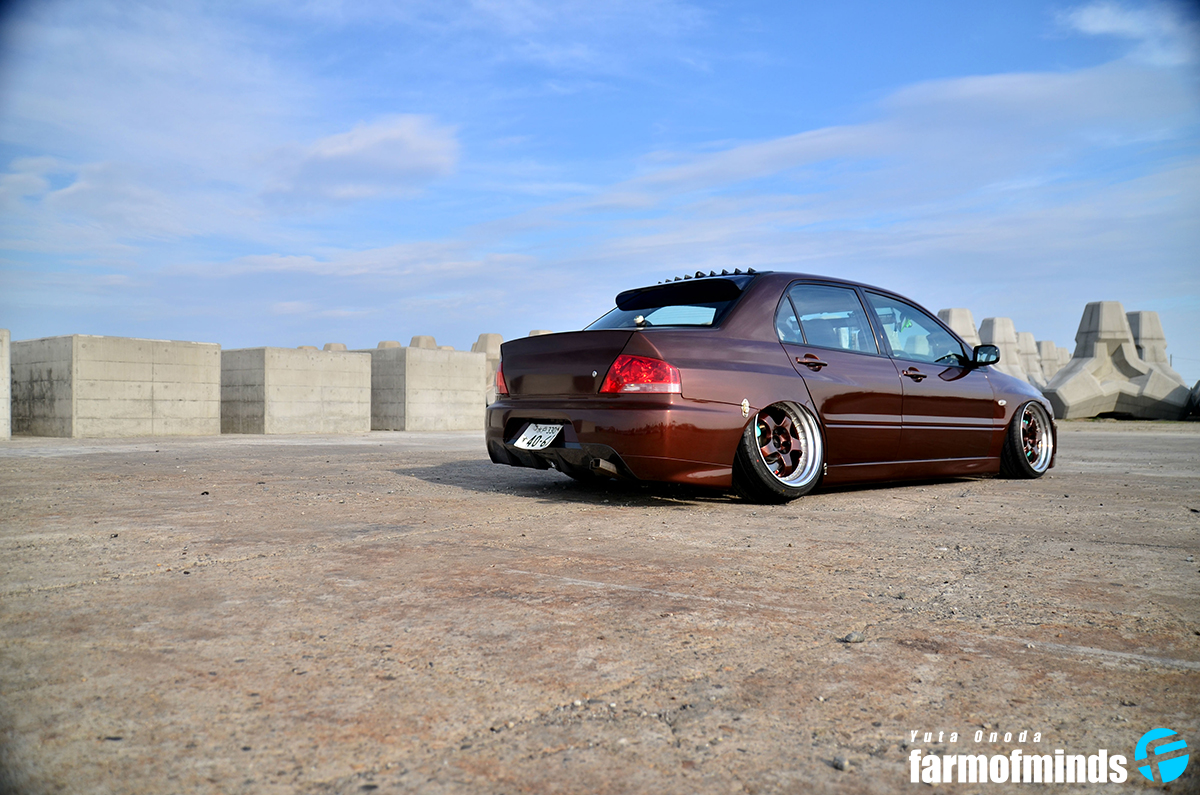 So its mission accomplished for Koki, who has undoubtedly created one of the most extreme and divisive Evos in existence right now. His VII challenges the Lancer establishment without relying on 600+ bhp engines, giant wings or semi slick tyres. Finally, make sure you check out the Farm of Minds feature car hat-trick below! 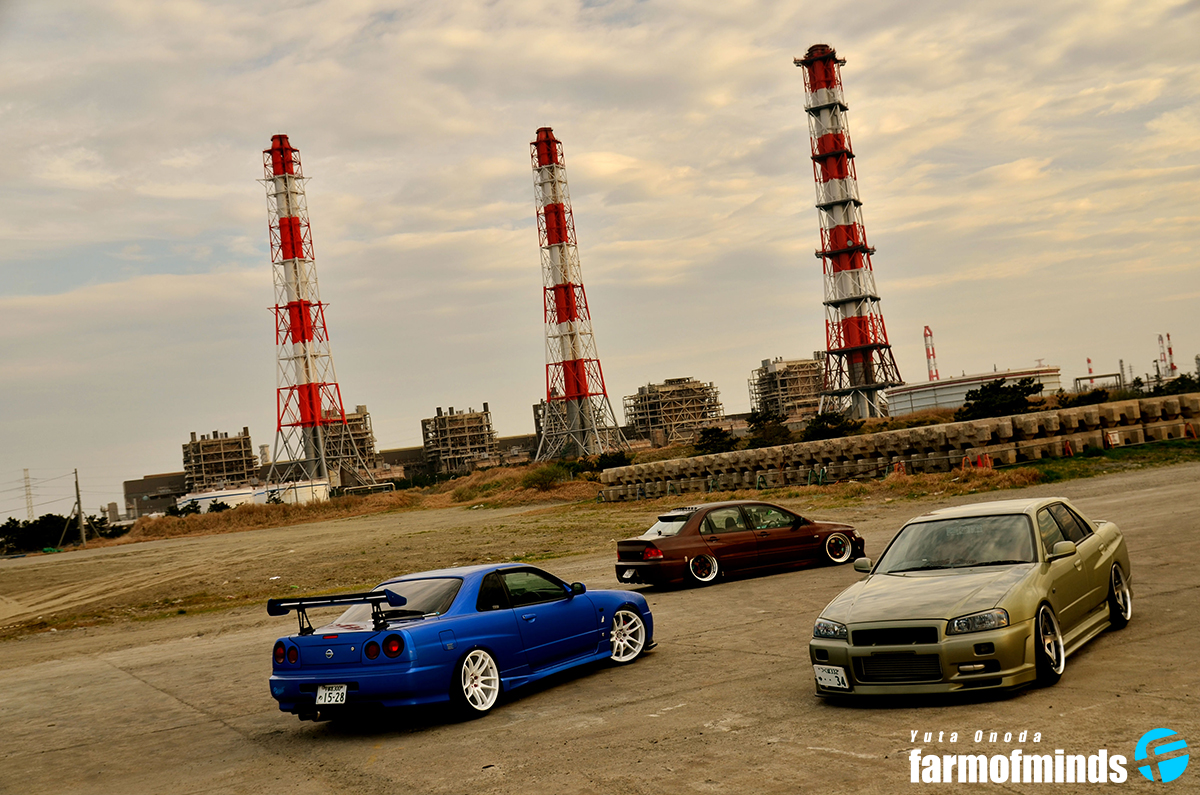 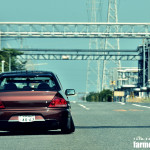 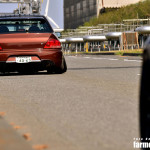 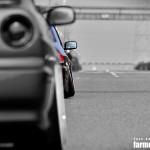 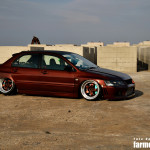 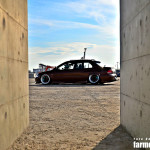 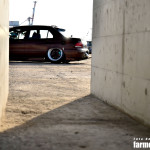 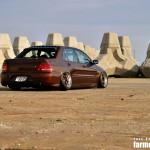 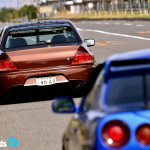 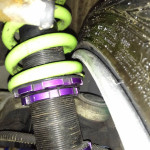 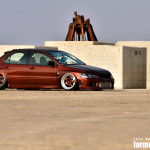 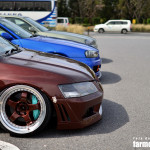 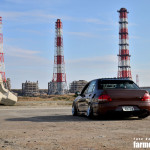 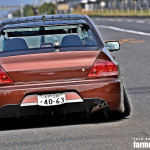 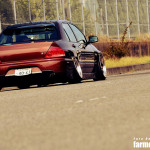 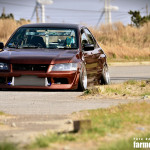 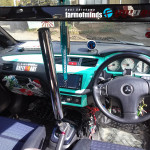 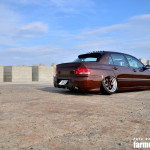 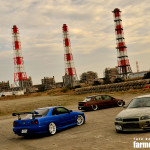