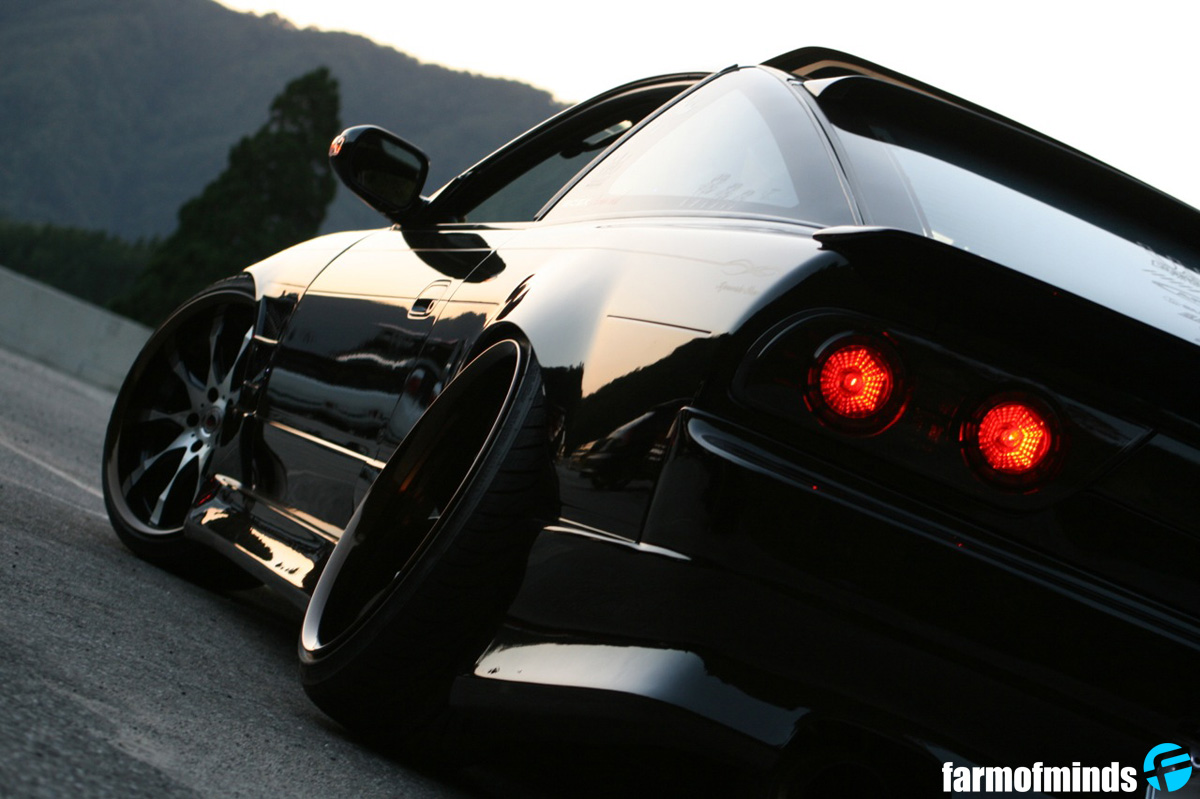 I’ve a confession to make, I’ve been postponing the feature of this Nissan for an awfully long time. Not because it’s not worthy of my time, simply because it’s so extraordinary, ballsy… bonkers, that I’m having a hard time finding words to describe it.

Just from the picture above you might be pretty confused as it looks a lot like a VIP RPS13. This is not awfully far from the truth and with that you already know that this is a Silvia unlike any other.

You could say that Kazuma’s took a 180 turn (See what I did there! puns for days.) and made something that will split the crowd like Moses split the Red Sea. 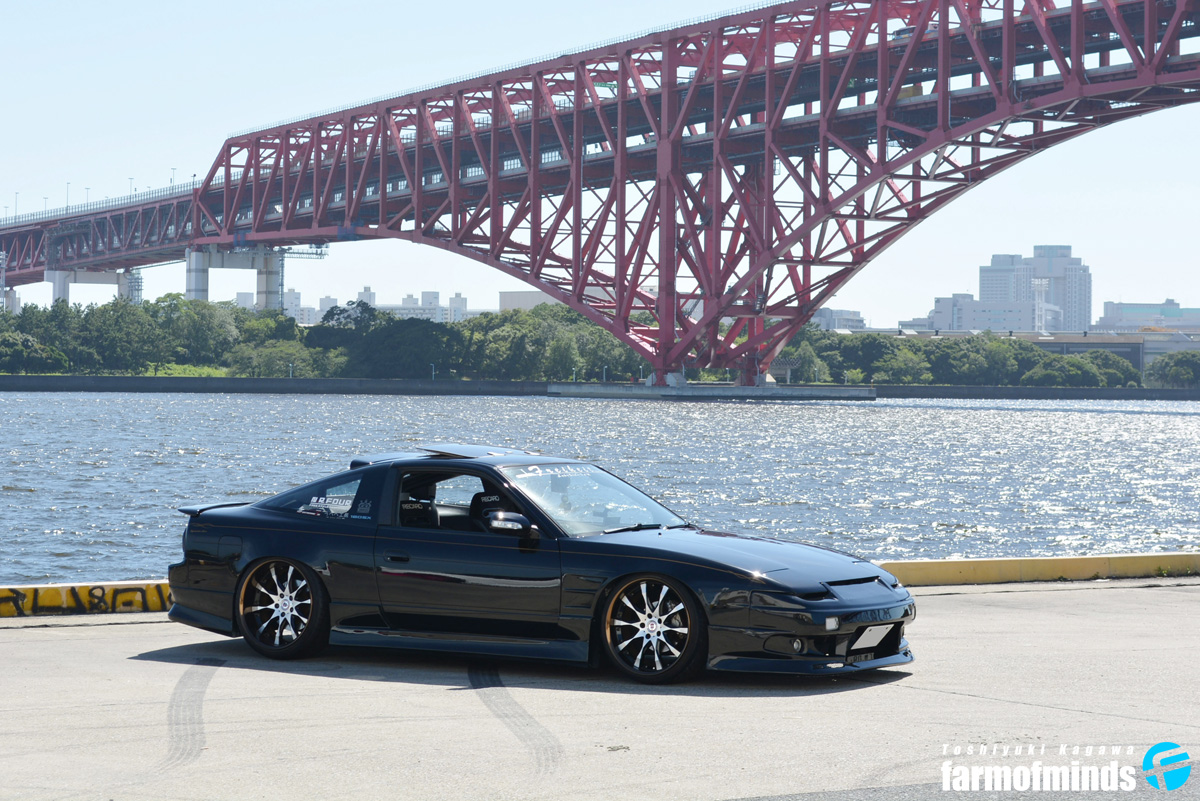 The first thing that will raise an eyebrow is the unexpected choice of wheels for the car. A 19x9J (F) and 19x10J (R) Work Schwert SC2 setup isn’t what you would normally see.  In fact if you tried looking it up, it would probably only come up on the land of the forgotten – Google search’s 2nd page!

However this 21 years old 180sx is so clean and well equipped with aftermarket aero parts, that only a petrolhead can tell it’s been several decades since it’s rolled off the production line.

The overall feel of the car is smooth and everything blends in perfectly. 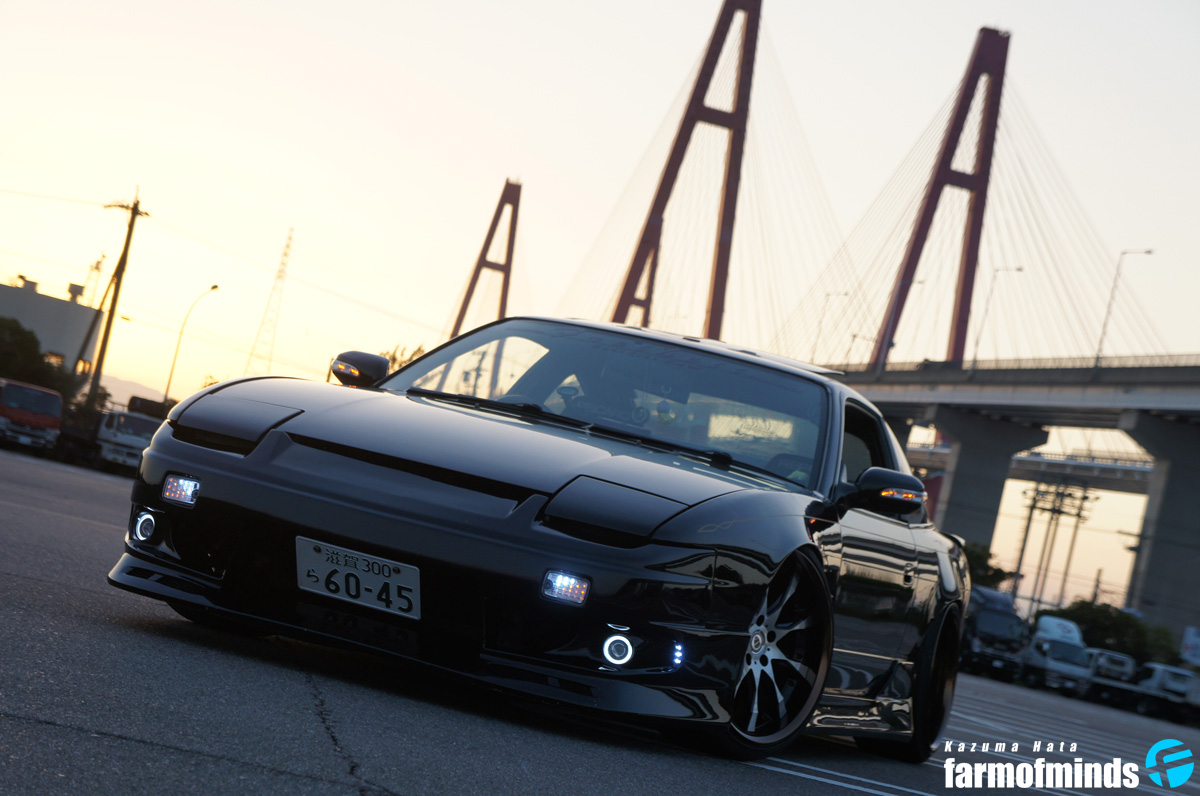 It doesn’t take a PHD to realize, just how much thought and planning has gone into figuring out what direction did Kazuma want to take his car.

Supporting the 19″ rims are a full Origin Lab Streamline front, rear bumper, side skirts with a 20mm fender on the front and a 45mm on the rear. 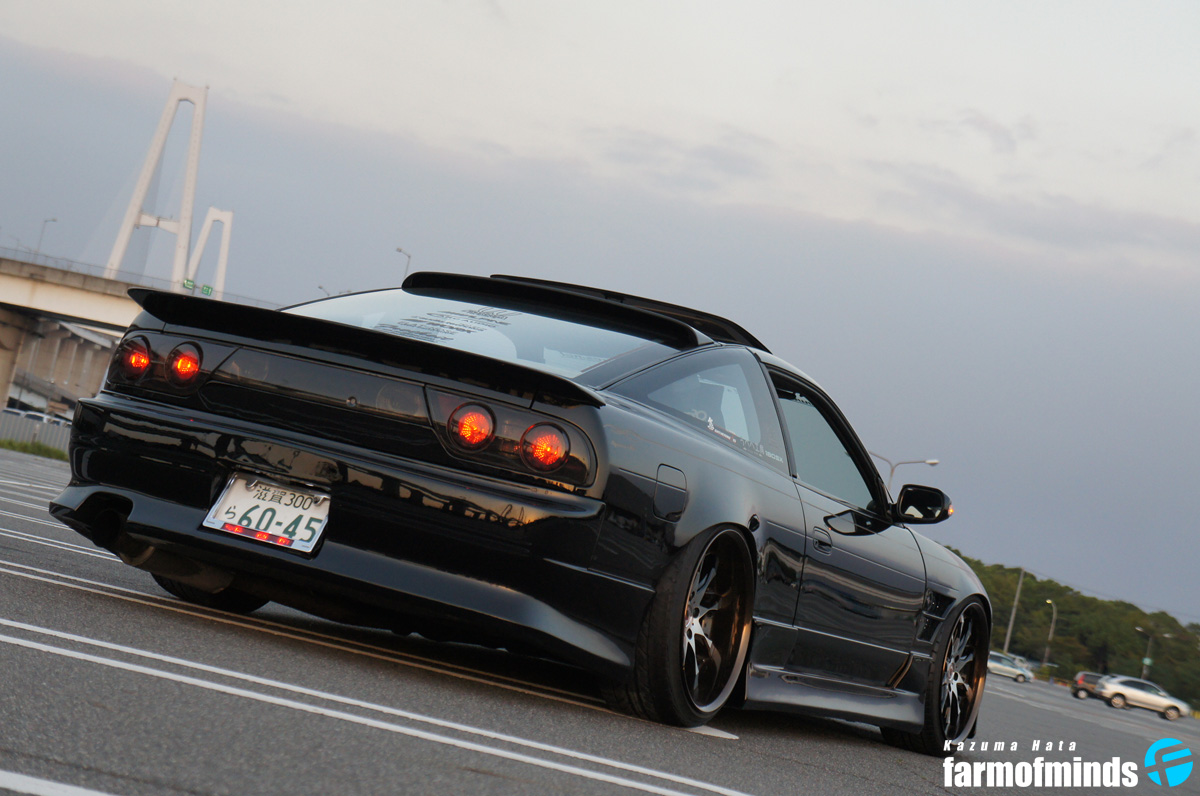 He’s also opted for the SuperMade trunk spoiler and a 326 Power roof spoiler.

From underneath the car we got a Tein Drift damper to replace the stock springs and we’ve some extra stopping power in the form of some OEM s14 calipers on the front and a Silk Road big rotor kit on the rear.

Now up to this point it’s all fairly reasonable with some unique choices and it would be reasonable to question… whats with all the fuzz around this car?

Well here’s the kicker. When the sun goes down it’s kind of like a rolling Disco! 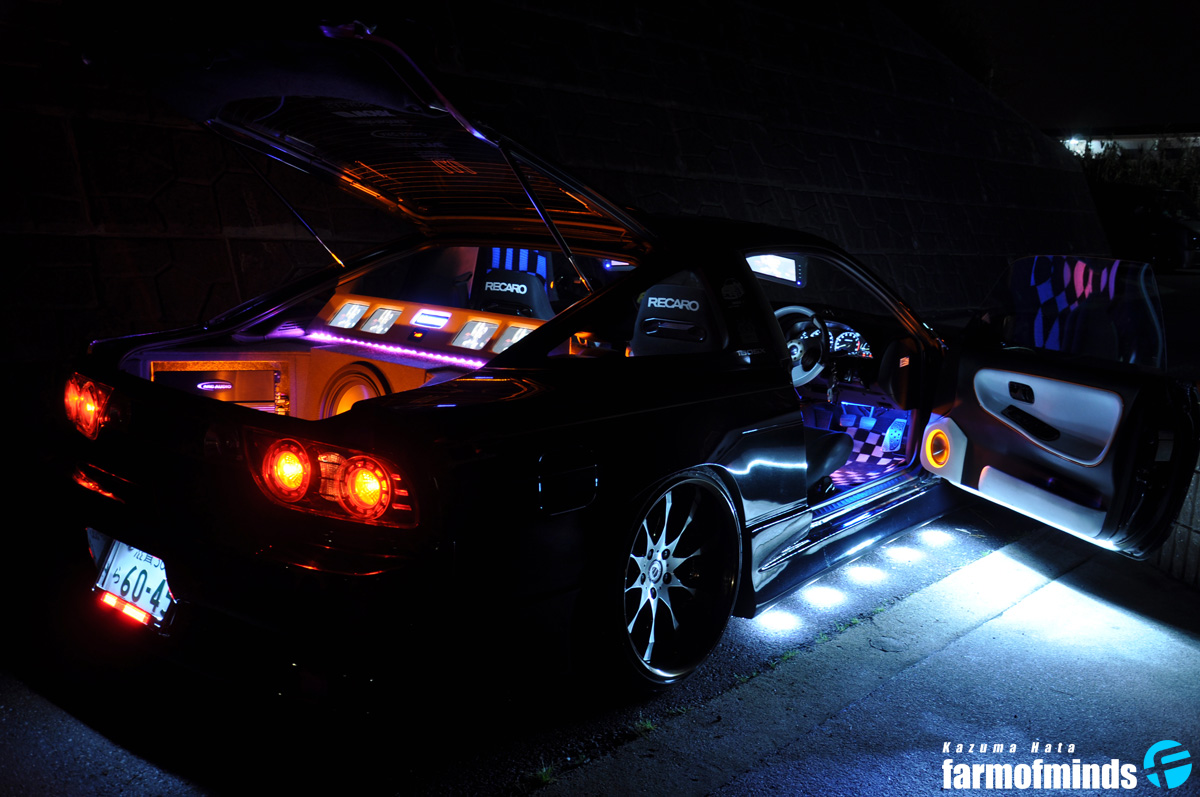 We’ve all seen the “horror” movies about the little kids buying everything from eBay that’s under 20$ and putting on their cars, but we’ve rarely seen an example done in a controlled method on one of the most iconic Japanese sports car (apart from the early installments of the Fast and Furious franchise).

Unfortunately we weren’t able to get an exhaustive list about whats inside the interior so I’ll just list out what we do know, and then we can do what we love to do and speculate on the rest.

The seats got upgrade into a pair of Recaro SR3’s and a set of Defi Advanced BF meters been installed. 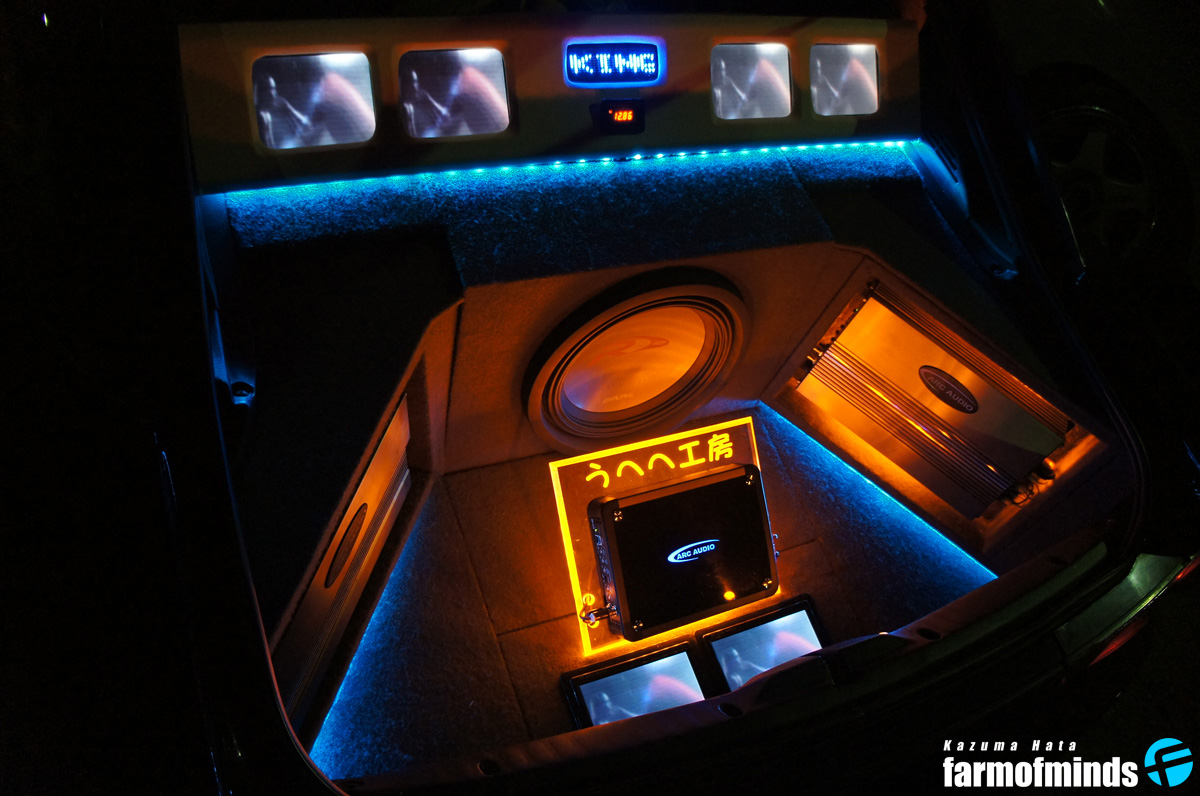 Funnily enough, I always thought that radio in a sports/drift car is kind of useless, as you’re not going to hear a lot from it due to your purposefully loud exhaust.

Well the day has come that I might just eat my own words. In the trunk we have a Carrozzeria Avic-ZH09 from Pioneer, which I’m fairly certain aren’t used for it’s navigational capabilities.

We’ve a couple of smaller speakers in the form of 2 ARC4050xxk. Last but not least we have two ARC Audio XXD1500 amplifier neatly tucked away. 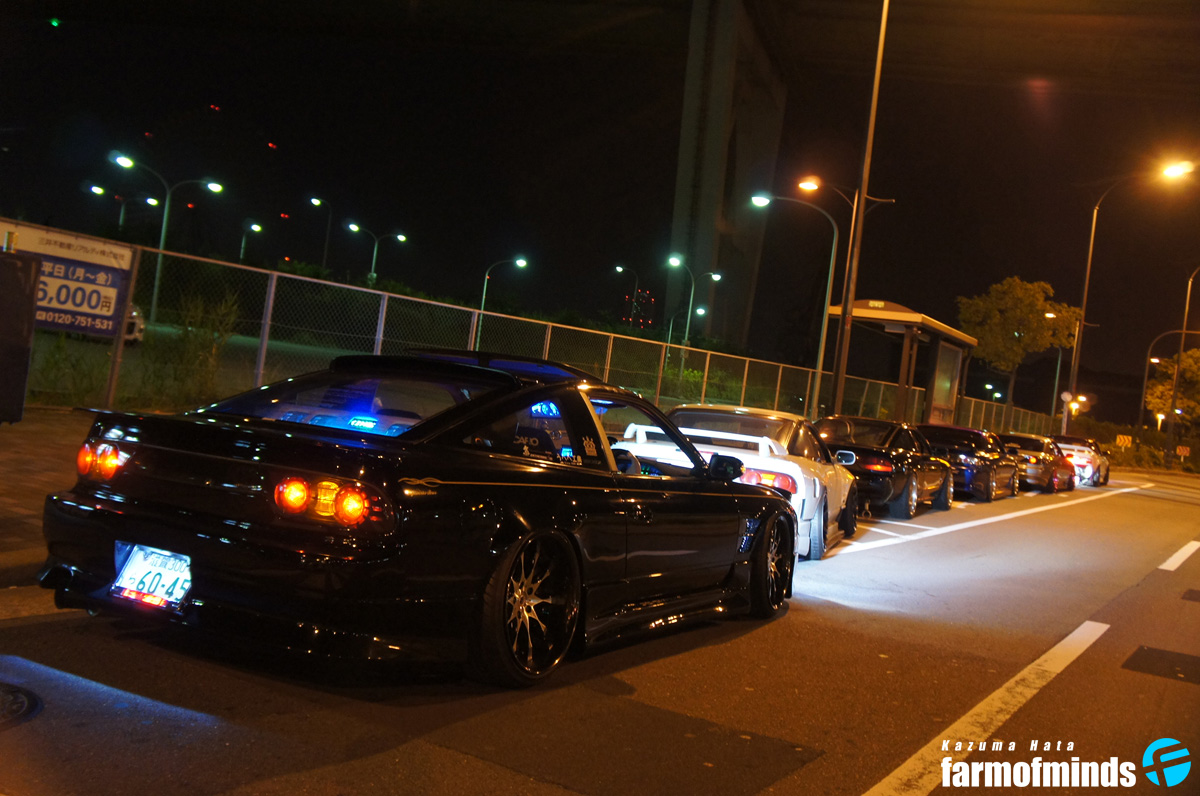 As you can tell this is not the work of a teenager, this is perfection on a spectrum that most of us swayed away from due to whatever reason. We’ve been influenced by media, crazy Russian videos, “ney-sayers” constantly spamming whats wrong and right.

A lesson to take away from Kazuma is not to let anyone shatter your dreams and build what will make you happy.

There are a few more pictures of the extraordinaire for you to enjoy below and as always comment and discuss below! 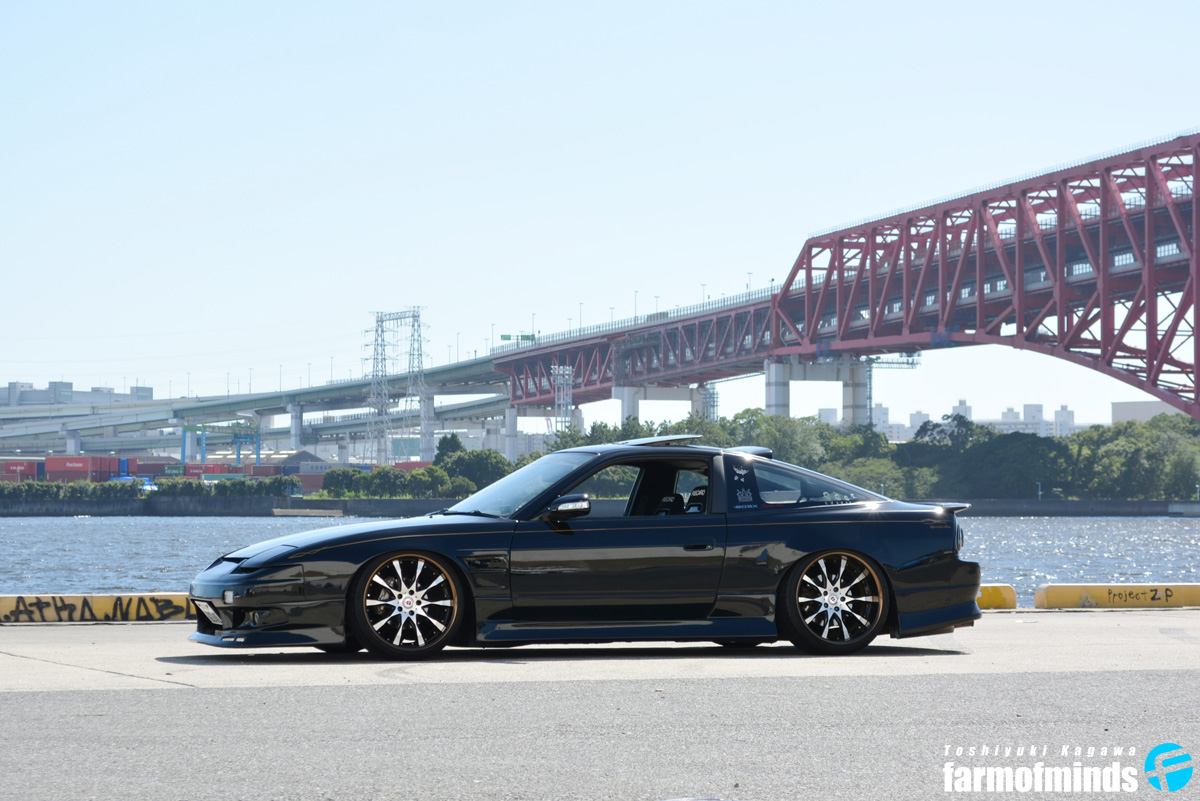 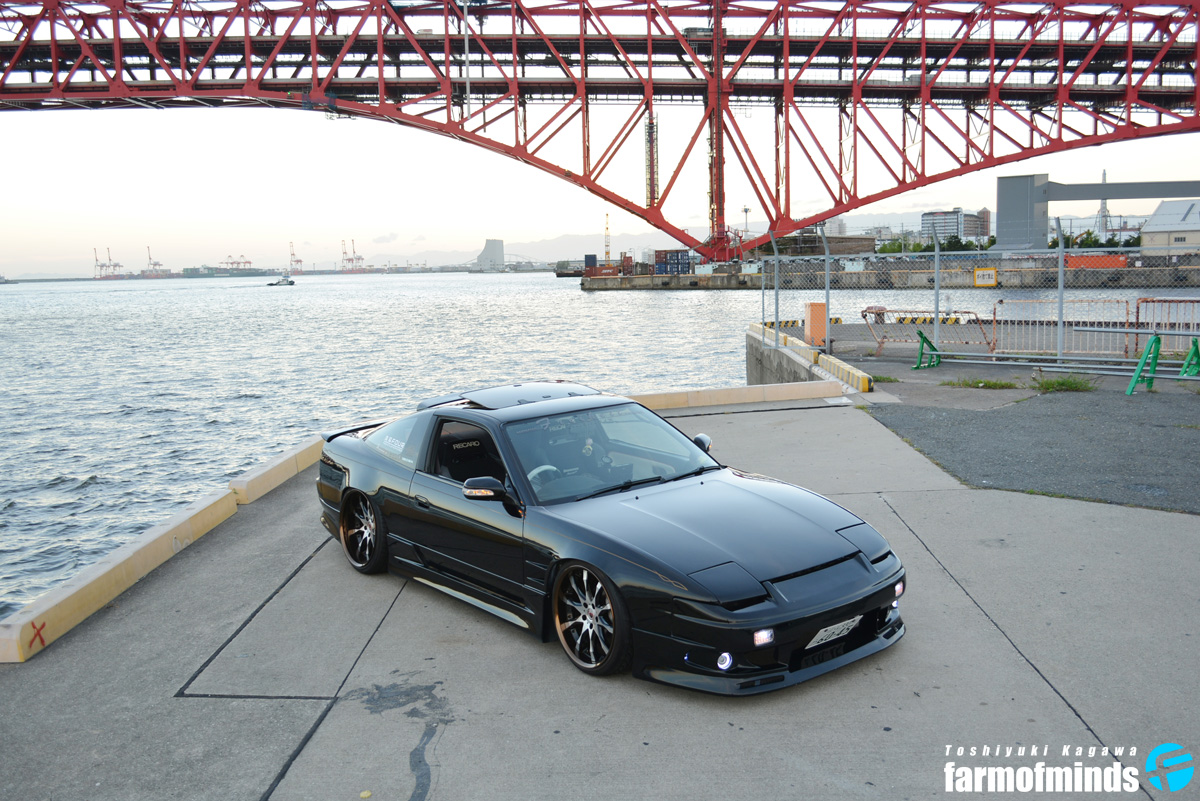 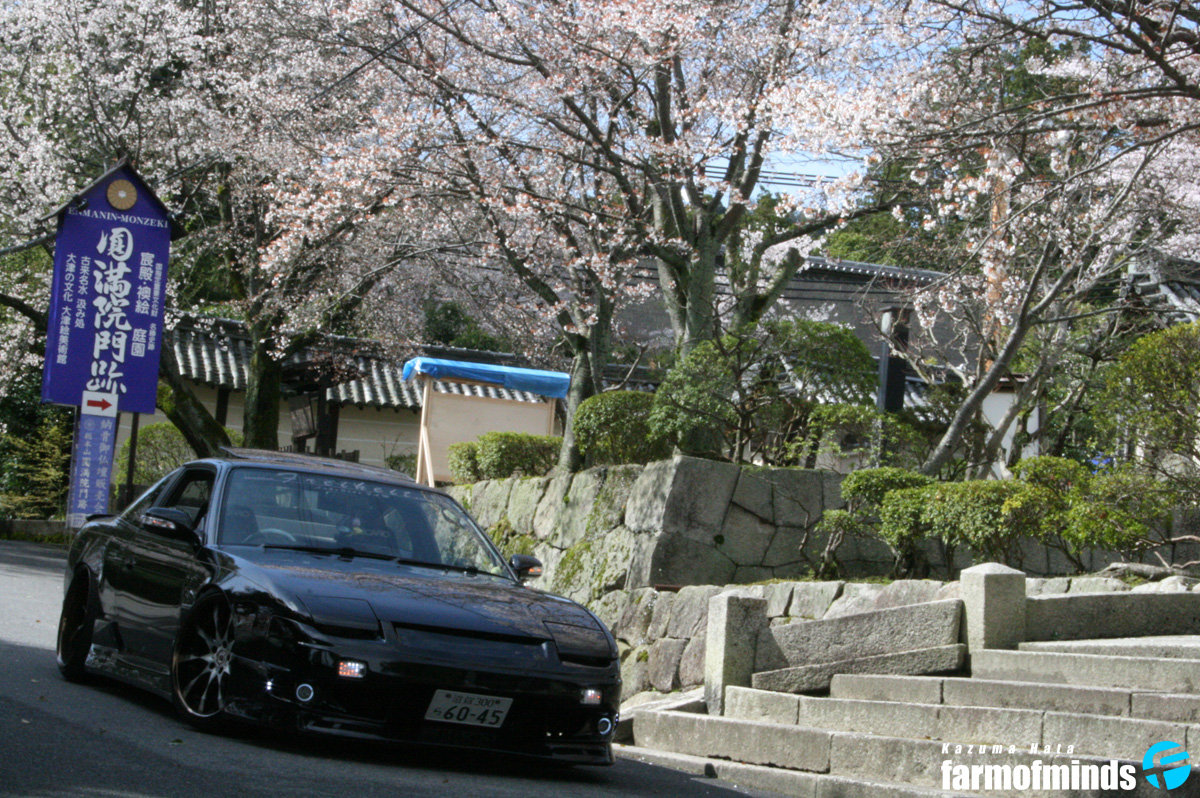 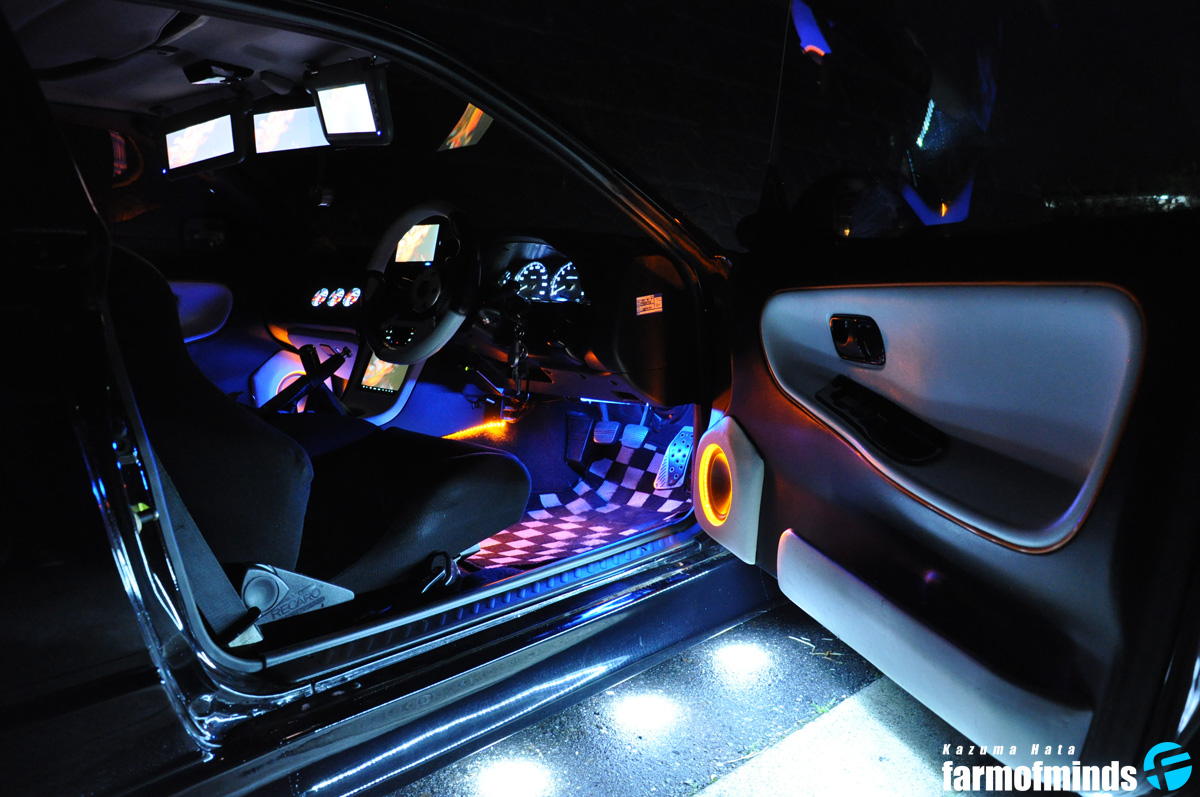 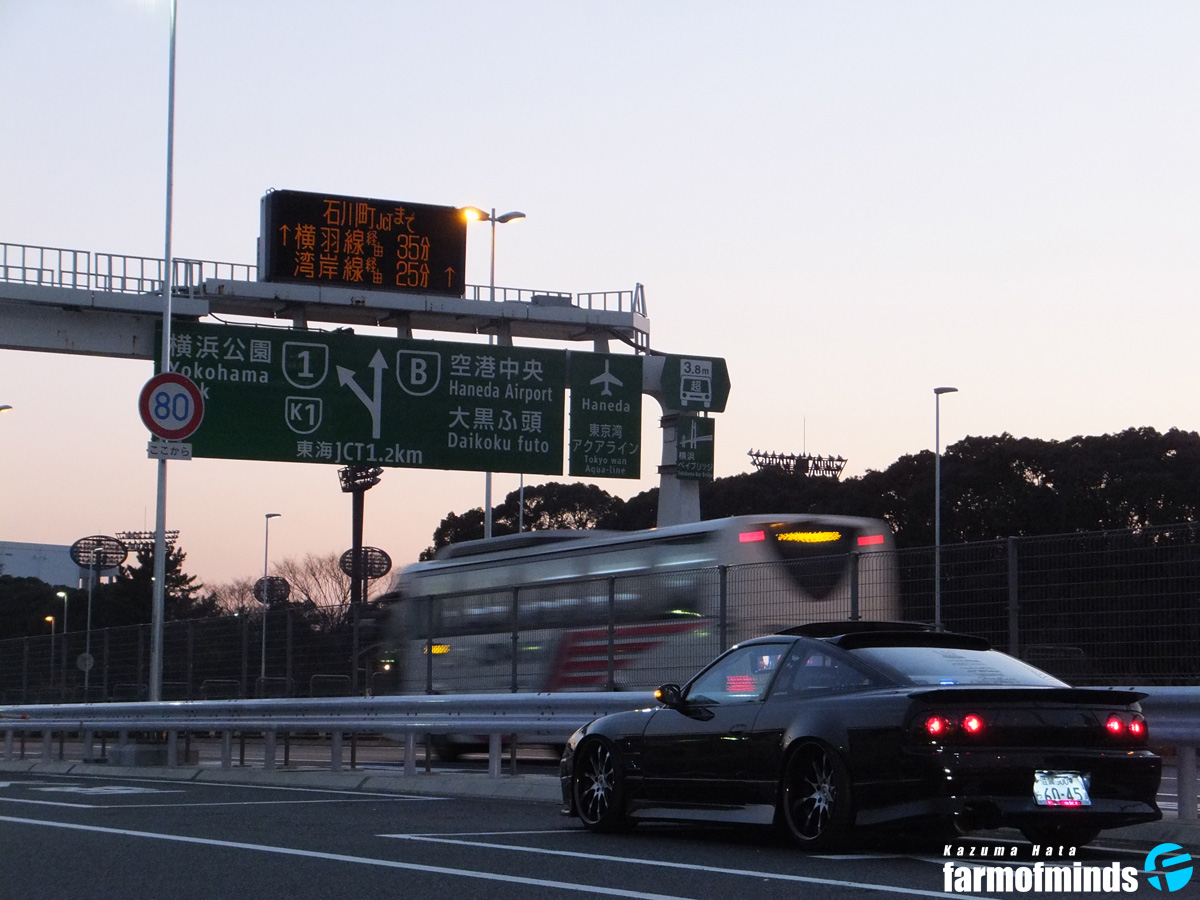 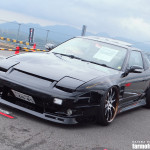 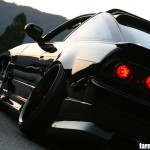 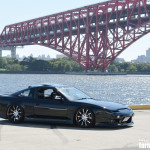 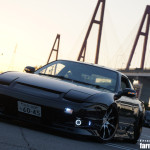 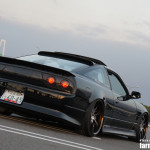 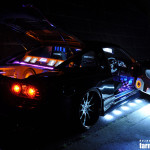 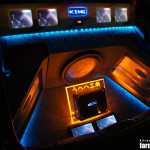 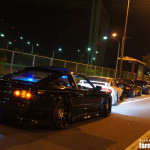 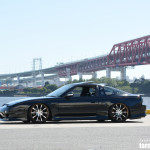 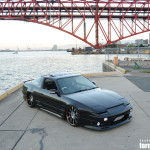 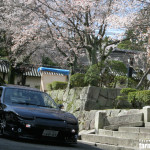 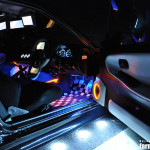 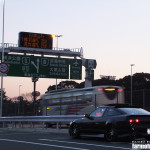