Chris’s S13: “The whole is simpler than the sum of its parts” When I first encountered Chris, the owner of this beautiful S13, he was driving a white hatchback S13 equipped with some beautiful Work Meisters S1 wheels, so when he picked up this S13 coupe I was excited to see what direction he went with it. Although Chris is at the young age, he is no stranger to the S-Chassis. Ever since he was 10 years old, it has been his dream to own and build a 240sx, so at the age of 16 he got his first 240sx and never looked back. Although this is Chris’ 4th, yes you heard correct, FOURTH 240sx; he states, “having an S-Chassis isn’t the easiest car to own. People use and abuse them and sell them after they’re done, kind of like that one hoodrat we all know.” Chris has thought of owning other cars such as an AE86 and an E36, but he still can’t see himself buying another car unless there is an S-Chassis parked in his garage aswell. “I guess it’s just the passion that comes with being a car head,” states Chris. When I asked Chris what future plans he had for his S13, he simply stated, “I just want a roll bar and a functional brand name bucket seat,… Maybe an SR20 far down the road.” It is evident that Chris is keeping his S13 Coupe clean and simple. like Willard Gibbs once said, “The Whole is Simpler than the Sum of its Parts.” 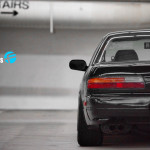 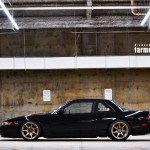