Have I ever killed someone?

I don’t kill people. I just “remove” them.

There are certain situations that call for removal.

In our line of business, when a problem arises we act without hesitation.

The modern day Yakuza is a global network of organized crime. Unlike any other crime organization, Yakuza is an integral of Japan society that does not operate in discrete. Their influence in neighborhoods and the government offices remains elusive yet the New York Times in 2010 reported that the Yakuza controlled an economy worth over 20 trillion yen annually.

Filmographer Luxe Huxham encapsulates the story behind the modern day Yakuza in his recent short film interview, Blackbusiness. The conceptual documentary project sheds light on the transition of Yakuza from a mob organization into a corporate entity. The nine minutes long interview illustrates the Yakuza willingness to use violence to assert and maintain power. Huxham describes his work not as an answer, but it was meant to raise questions about the Yakuza. 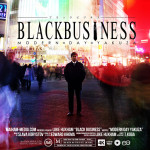